This weekend, the Toronto International Film Festival will take the pulse of the Canadian movie industry. By premiering productions from such acclaimed homegrown directors as Charles Officer (Akilla’s Escape) and Michelle Latimer (Inconvenient Indian), TIFF – even in its mostly virtual 2020 form – will offer a spotlight to filmmakers who go much of the year without one.

Yet inasmuch as September in Toronto marks a celebration of Canadian talent, this year’s event is overshadowed by an industry crisis that, while not sexy in typical moviemaking fashion, is essential to the business’s survival: COVID-19 production insurance. Although TIFF might return to normal next year, almost no Canadian filmmaker is going to play the 2021 festival (or 2022) if this country’s film and television sector doesn’t figure out its insurance dilemma, which remains unsolved three months after industry leaders declared it “the most urgent issue on our plate.”

Around the world, insurance companies are writing COVID-19 exclusions into their policies, which effectively prevent productions from even starting, due to the huge liability of a virus-sparked shutdown. While most big-budget Hollywood productions are able to self-insure, and projects that started filming before the pandemic are covered by pre-existing policies, an uninsured COVID-19 work stoppage could bankrupt most Canadian production companies “in a heartbeat,” says producer Tom Cox, managing director of Alberta’s Seven24 Films (CBC’s Heartland).

To ensure the sector – which added $12.7-billion to the country’s economy in 2018-19 and created the equivalent of nearly 181,000 full-time jobs – doesn’t collapse, the Canadian Media Producers Association in June urged the federal government to support a “market-based” solution. Insurance companies would provide COVID-19 protection, so long as producers paid premiums for the additional coverage and the government fronted a $100-million “backstop” reserve for claims.

According to the CMPA, producers’ premiums would go into a “dedicated pot to pay for potential claims,” with Ottawa only contributing funds if the money generated through the sale of the insurance policies was “insufficient to cover the claims made.”

While similar insurance initiatives have been approved by the governments of France, Australia and Britain, the CMPA’s proposal has yet to gain approval from Ottawa, where it needs to go through the Heritage and Finance departments. (Quebec has taken its own measures, though, investing $51-million through its cultural agency SODEC to offset production and insurance costs.)

”Urgency is the word, because if this doesn’t get solved soon, we’re going to lose the fall shooting season,” says Jonathan Bronfman, whose company, JoBro Productions, has a film set to shoot in October that risks falling apart if there’s no insurance backstop. “If Ottawa backstops this policy, it’s putting tens of thousands of people back to work. It pays for itself and, knock on wood, the policy doesn’t even need to be called on.”

In a statement to The Globe, the office of Canadian Heritage Minister Steven Guilbeault did not offer an updated timeline on its decision-making process, but said that “the department takes this matter very seriously, and, since June, has had regular discussions with various industry associations, including the CMPA and AQPM [Quebec Association of Media Production], while assessing possible solutions.”

Yet for producers facing a long winter, which is considered the off-season for domestic shoots, an answer was needed yesterday.

”If we lose this production season, that means the majority of Canadian productions won’t have shot in 2020, and may not until spring 2021 at the earliest. That’s almost two years of no production, factoring in the weather,” says Mark Montefiore, president of New Metric Media, whose flagship show, the international comedy hit Letterkenny, has pushed filming of its new season to next year after losing its August window. “The urgency was months ago, and it’s still ongoing. Every day that goes by, there’s less and less hope.”

Producers are eager to applaud the CMPA’s lobbying efforts, but right now all the trade body can do is wait.

”Minister Guilbeault was very responsive in addressing issues that emerged for the production sector at the peak of the COVID-19 crisis. What the domestic sector needs now, more than anything, is a federal indemnification program that will enable dozens of ‘camera-ready’ productions to get under way. Without a government backed-insurance solution, we will continue to have thousands of Canadian film and television workers unable to get back to work,” says Reynolds Mastin, president and CEO of the CMPA. “Our hope – and really our expectation – is that the announcement of such a program is imminent. Further delay will lead to some productions being pushed to 2021 and others being cancelled altogether.”

Telefilm Canada, which the other week made its annual splash by announcing the funding of 20 new English-language feature films with a total investment of more than $7-million, says it is approaching the insurance situation “in such a way that ensures flexibility for its clients.”

For low-budget productions, “producers that wish to proceed to principal photography have been able to move forward despite not having full coverage, because their production plans include safety measures and sanitary protocols that are in accordance with their province,” says Telefilm’s executive Christa Dickenson. “So far, this framework has already allowed productions with small crews to begin filming – three in Ontario, three in Quebec and two in Nova Scotia.”

As for low- or high-budget productions that do not fit Telefilm’s framework, Dickenson says that if the project’s standard conditions of commitment are met, “such as closed budget and confirmed financial structure being the two most important,” Telefilm will increase the percentage of its first funding payment to 35 per cent to help with cash flow on preparation costs.

Meanwhile, the limbo facing the domestic industry threatens to be exacerbated by productions that don’t have to worry as much about cash-flow issues, and see Toronto as an even more desirable locale given the COVID-19 situation in the U.S. and the fact that New York recently reduced its filming tax credit by five per cent. Already, a number of Hollywood productions have either begun filming here or confirmed that they will be this fall, including the Netflix series The Umbrella Academy and the Amazon Prime Video series The Expanse, causing independent producers to fear that such projects may lock up local talent for the foreseeable future.

”By not giving us the opportunity to get out of the gate strong because of this lingering uncertainty, we’re allowing the Hollywood productions to come here and absorb a good chunk of the crews,” says Bronfman.

However, Jim Mirkopoulos, vice-president of Cinespace Film Studios, sees more of an opportunity here. “We are the perfect industry for workers that want to transition from our declining manufacturing sector, or workers who simply want to join a growing sector, and are willing to undergo some retraining.”

Mostly, though, Canadian producers are just hoping to keep their lights on.

“If we’re not able to shoot something by, say, March, 2021, we’re not going to be able to keep our doors open. I need to have a very clear path,” says Karen Harnisch of Toronto indie production company Film Forge (White Lie, Sleeping Giant), which she runs with director Andrew Cividino. “We don’t take a salary from our company and won’t be able to do so until we get something into production. We’re running on fumes.” Opinion
Admit none: As the film industry works on a reboot, Spanish flu bans offer clues to whether the show will go on
August 21, 2020 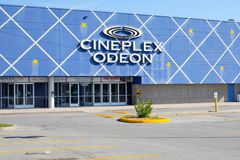 With TV work on hold, can this mid-career production co-ordinator break into a new industry?
July 15, 2020