The theatrical rerelease of Disney's wonderful, award-winning 1991 feature Beauty and the Beast – the gem of the studio's so-called renaissance era – harks back to, and honours, a couple of ideas pioneered with the studio's first feature, Snow White and the Seven Dwarfs: the rerelease and the simulation of three-dimensionality.

Snow White, a beloved and important film, premiered just before Christmas 1937. It returned to theatres several more times, establishing the pattern of Disney "opening the vault" to rerelease many of its classic titles every seven years or so – often with some new enhancement (Imax, etc.). To the wallet-emptying consternation of parents everywhere, this tradition expanded and evolved to meet the exploding home-entertainment market. (My collection, for example, contains "Diamond editions" of both Snow White and Beauty and the Beast.)

I vividly recall seeing Snow White for the first time in 1975. Back then, just the fact that the classic was in theatres again was a big deal. Disney is conjuring up similar "special event" excitement with its new 3-D conversion technique (patents pending) which, as applied to Beauty and the Beast at least, is not a gimmick.

The studio has dubbed the technique "Voluplane," a nod to the custom-built multiplane camera used in Snow White to create the illusion of depth that Walt Disney felt was crucial to give audiences, which were used to shorts, visual variety. In his excellent 2006 biography of Disney, Neal Gabler describes how this enormous contraption, operated by a team under gruelling conditions, would photograph several planes of cels.

He goes on to quote several writers gushing over how the sense of physical realism made audiences connect more emotionally with scenes, with one observer stating that if the multiplane was not properly handled "it may blast the animated sound picture completely off its course."

The creative team that transformed Beauty and the Beast into a 3-D movie faced a similar concern. The film is already visually dazzling and packed with emotion in both the storytelling (which adds dozens of new characters and notions to the well-known French fairy tale) and the memorable, plot-furthering songs by Howard Ashman (lyricist) and Alan Menken (music). Although it's in traditional hand-drawn style (with the studio's new CGI department creating sets for key scenes), the film was produced using a computer-animation system the studio created and employed during its renaissance. But it's clear the 3-D team didn't simply get everything back online and go to town.

In the opening number – one of the most delightful openings of any movie musical –the beautiful Belle (Paige O'Hara), book in hand, sings and dances through her small provincial town as the motley townsfolk comically comment on her odd ways. Long shots revealing the streetscapes and forest beyond are rendered spectacular in 3-D, but the effect is pulled back for close-ups.

The 3-D pops out to enhance the drama or energy of scenes in which settings are large and integral to the action. The gloomy forest where Belle's eccentric father gets lost and chased by wolves, the enormous castle where the unruly Beast (Robby Benson) holds Belle captive hoping to win her love, the cavernous dining room where the Beast's enchanted servants deliver the show-stopping Be Our Guest, the glorious ballroom where romance finally blossoms – we become truly immersed in these places and thus in the story.

Yet despite the splendid new visual presentation, the main attraction of Beauty and the Beast remains its smart, courageous heroine – a "take-charge kind of gal," as Globe and Mail critic Jay Scott wrote in his review of the original movie. And now a 21st-century kind of gal.

Beauty and the Beast 3D 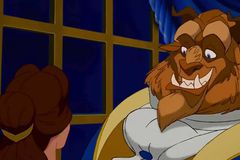