Big Bird, it must be said, is no Hamlet.

For one thing, he's covered in 6,000 yellow feathers. And while countless actors around the world have put their stamp on the tortured Danish prince, only one man has ever played the Bird.

That's right: Kids who took in his cheery yellow visage this morning were watching the work of the same man whom their parents, and in many cases their grandparents, watched when Big Bird first appeared on Sesame Street in 1969. "I don't think anyone has played a TV character for 45 years," says Caroll Spinney, who was hand-picked by Jim Henson to step inside the giant fluffy suit all those years ago.

The novelty of Spinney's claim to the character is what first got the attention of the filmmakers behind the documentary I Am Big Bird: The Caroll Spinney Story. An endlessly entertaining movie about one of the most beloved puppets in the world and the man who has brought him to life, it makes its world premiere at the Hot Docs film festival in Toronto on Sunday.

"This idea was really, in its basic form, 'Hey, it's really cool one guy's been doing this for so long,' " says Dave LaMattina, who co-directed the documentary. But after meeting Spinney and delving into his life story, LaMattina and his partner, Chad Walker, knew they had a story that was much richer and more nuanced than that novel fact.

(Jump to the rest of the article.)

Playing Big Bird is much more physically demanding than you might guess. "It's uncomfortable," says Caroll Spinney, who has performed the character since 1969. Not only is it hot and hard to see inside the suit, there are multiple elements that Spinney must operate to make the character come to life. 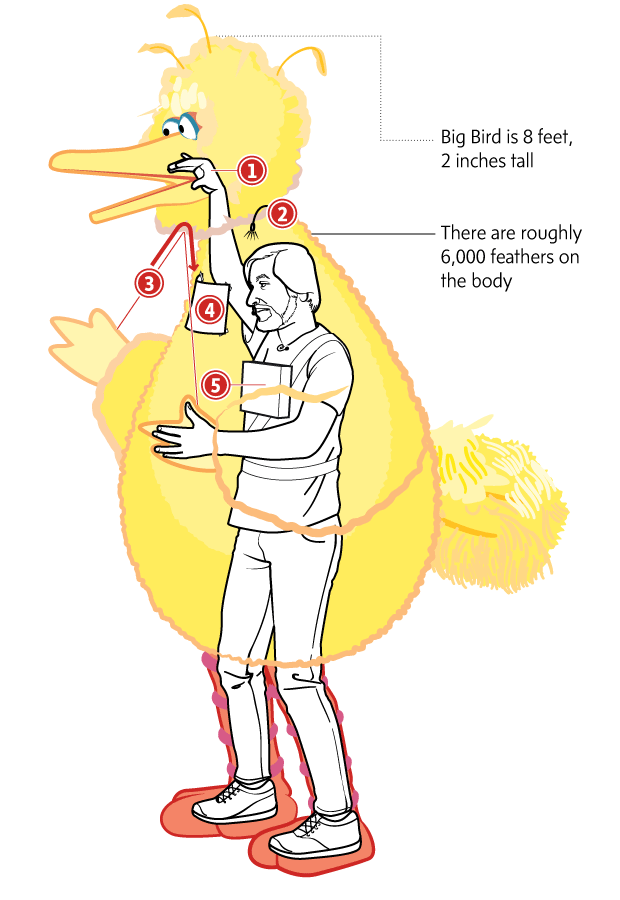 1. Spinney's hand is in the beak: thumb on the bottom, four fingers on top. One of those fingers uses a clockwork lever to operate Big Bird's eyelids.

2. An LED light on a flexible wire inside the suit can be aimed wherever Spinney wants.

3. A fishing line, which goes through a little ring under Big Bird's neck, connects the wings and acts as a lever to move the right wing up and down.

4. The script is taped in front of Spinney on the inside of the suit.

5. Spinney wears a monitor strapped to his chest, allowing him to see what viewers see at home. The screen on the monitor is really tiny – it's a 1.5-inch picture.

How one man came to own Big Bird

The heart of that story isn't just that one guy has played Big Bird all these years, but that one performer has created a character that children and adults the world over truly love. If someone else had been the feathered one, "Big Bird would still be super popular but he'd be super different. Caroll created a character that just resonates with people," LaMattina says. "There is no one else in the world who could have made that character who it is."

The puppet was drawn by Henson and built by his long-time collaborator Kermit Love. But the character itself was very much Spinney's creation. It was Spinney, for instance, who had the idea that Big Bird is a child – he just happens to be a really big one. "Jim saw him as kind of a really silly, funny, goofy guy," Spinney says. But when the actor decided to make him a kid, "nobody ever questioned it." That first year on Sesame Street, Big Bird learned the alphabet alongside all the inner-city kids whom the show was created to help, Spinney recalls. And because he's a child, Big Bird has an innocence that's nearly impossible not to sympathize with; he's more than just some adorable little thing you tickle for fun.

Indeed, the documentary looks briefly at the relative popularity of Elmo, and politely makes the case that Big Bird has stood the test of time because children can identify with him. "Big Bird lives a very human life with human emotions, all these kinds of things that children have to live through," Spinney offers.

Which brings us to another difference between Big Bird and Hamlet: The former is far harder to perform. One of the most enjoyable parts of the documentary is its exploration of how Spinney operates Big Bird. Unlike the other puppeteers on the show, the actor is inside his character, alone, in the dark. A TV monitor strapped to his chest lets him see what's going on outside his costume. One hand is raised above his head to operate his beak. Keep in mind that he's sometimes on roller skates. Off the set, I Am Big Bird also explores Spinney's harsh relationship with his father when he was growing up, among a handful of darker moments in the puppeteer's life. Not everyone wants to know such stuff about Big Bird, apparently. When he wrote his autobiography several years ago, Spinney says his publisher excised the dad parts.

I AM BIG BIRD Trailer from Copper Pot Pictures on Vimeo.

Perhaps suspicious of any whitewashing of the yellow one, cynics might think Spinney's unerring kindness is itself suspect. No one's really this nice, they think. And on one level, he's not: One of the most intriguing things about Spinney is that he's also Oscar the Grouch. Like, really. He performs both roles. But Spinney insists he doesn't share that garbage-can-dwelling misanthrope's dark side. "He's much more rude and judgmental than I could ever be," Spinney says.

When he won his lifetime-achievement Emmy in 2006, Spinney brought Oscar onstage, on his arm, for his acceptance speech.

"What? Who are you?" the Grouch replied. "Nobody's ever heard of you."

That may be almost true. But Spinney is much more Big Bird than Oscar when it comes to accepting his lack of public recognition. "Most anyplace I go, nobody knows me by sight," he says, with evident equanimity. (Frequently, however, grown men will find out who he is and give him a hug, sometimes with tears in their eyes, says Spinney's wife, Deb.)

Now 80, Spinney knows that eventually he'll have to stop playing Big Bird. "I've never owned him," he says of the character. Still, he has been him all these years, and the documentary provides the actor a chance to enjoy wider recognition, if not quite what Big Bird himself has long basked in. Of his nascent fame, adds Spinney, "I guess in a way I'd have to say, 'Well, it's about time, because the characters are so well-loved.' "

As for why it took so long for his story – both inside and outside that feathered costume – to become a movie, Spinney says it has nothing to do with any reluctance on his part. The answer, rather, is a simple as your ABCs: "Nobody ever asked." 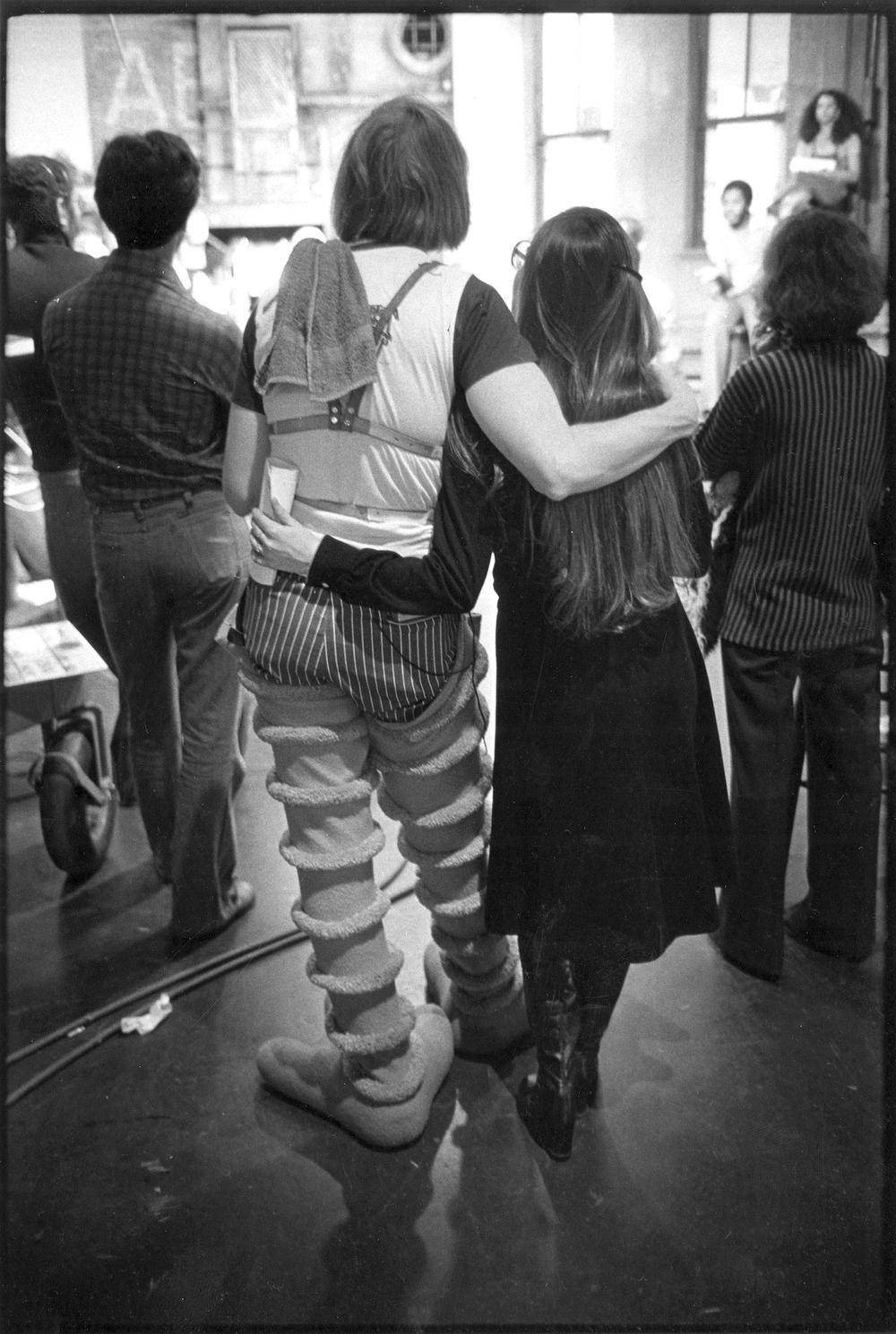 Caroll Spinney has been Big Bird and Oscar the Grouch since Sesame Street began airing in 1969.