The American filmmaker Stanley Nelson follows up 2015's The Black Panthers: Vanguard of the Revolution with Tell Them We Are Rising: The Story of Black Colleges and Universities, an unflinching feature that opens this year's Toronto Black Film Festival (Feb. 15 to 19). The Globe and Mail spoke with the award-winning director about the documentary, a black film renaissance and why everyone is so excited about the blindingly white La La Land.

Your film Tell Them We Are Rising is an American story, specifically an African-American story. What will Canadian audiences get from it?

I hope that Canadian audiences will get the same out it as white audiences in America do. We tried to make a film that even if you knew nothing about the story, it's going to be entertaining and informative. It's a story that's not known.

I grew up in the United States in the 1970s, and though I know all about what happened at Kent State, I had no idea until I watched your film that two black students were shot at Southern University by white sheriff's deputies during a peaceful protest in 1972. Does that surprise you?

Not at all. I mean, it's a story that I didn't know, and I was in college at the time. So, that says something about how things are reported in the United States. The black students were killed, and people didn't hear about it. Kent State? We all heard about it.

The turn-of-the century educator and African-American leader Booker T. Washington is a big part of the film. He's described as a rock star of his day, but the film presents some of his ideas as being steeped in "neo-slavery." Is that a controversial presentation?

We'll see. I think it's common knowledge, about Booker T. Washington. But people, at times, can be apologists for him, and talk about him being well-meaning.

Well, most people are. But he did a great deal of harm. What we tried to show is who controlled education. Because Booker T. Washington said what white Southerners and white industrialists wanted to hear, he became one of the most powerful black men in the country.

At Sundance this year, Brickson Diamond of the Blackhouse Foundation was quoted as saying that we're in the midst of a renaissance time for black film and television. Do you agree?

To call something a renaissance, it has to exist for a period of time. For something to exist for one or two years, I don't think it is a renaissance. I think what's happening, though, is that black people are asserting themselves. We have really good work by African-Americans that is unapologetically black.

The film Moonlight, for example.

And O.J.: Made in America and Atlanta. These are shows on TV that are black. I think that's the big difference. That's what people are looking towards. You have people who are unequivocally talented. That's the difference now, as opposed to, say, the blaxploitation era. We have a bunch of talented people out there who give us all hope. So, I hope it is a renaissance. We'll see.

What's your take on La La Land? Some see it a white-saviour film.

I don't think it is. It's a Hollywood confection. It doesn't try to be anything else. It uses some of the old tropes of Hollywood, dressed up in new garb. That's why people love it. It takes us back.

Takes us back where? 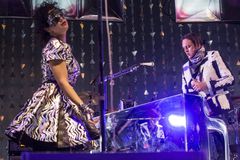