How can I convey the mellowness that is Bruce Willis, his quietude, his Zen-master vibe? Embarking on a hotel-room chat with him two weeks ago about his new movie, Looper, which opens Friday, Sept. 28 – he plays a time-travelling assassin who tries to outwit his younger self, played by Joseph Gordon-Levitt – I expect a big Bruce, a "Yippie-ki-yay" Bruce. What I encounter is more, "Hey," murmured with half-closed eyes. His stillness (almost complete), his shaved head (he looks good this way) and his soft cashmere sweater (oatmeal-coloured) converge to make me feel like I am attempting conversation with an organic egg. An egg, moreover, that is whispering e.e. cummings poems, crypticandhushed, with nocapitalletters.

He had just come from the Looper press conference at the Toronto International Film Festival, and there, too, his utterances were runic. To the question, "What advice would you give your younger self?" Willis, who is 57, had replied, "To not take myself too seriously, or hardly anything. It goes so fast." Later he'd said, "I'd go back and make more mistakes earlier, so I would have got to the answer earlier."

In the hotel room, I speak in a normal voice, but it rings out like I am bellowing through a bullhorn. "You Seem to be In A Ruminative Mood," I yell.

"I'm just … unprepared," Willis replies. Pause. "I guess I'm in a good state of mind." Pause. "I really like the film. It makes me think about things." Pause. "But I'm just kind of winging it."

"Are You Always This Mellow?" I shout. "Or is this a Protective Mechanism you've developed to Handle the Craziness of your Life?"

"This is pretty much me," he exhales.

An assistant enters and hands him a cup of coffee. "Ah, nice," Willis says. "Let's see what happens when I have a coffee."

He takes a sip. He whispers calmly, "That is scalding." He sets the cup down, and continues smoothly, "This is how I am. I don't get too worked up about things. My children can get me worked up." (He has four daughters – three with his ex-wife Demi Moore, and a baby, Mabel, with his wife of three years, the model Emma Heming.) "They know how to push my buttons. But I don't have that much to get upset about."

So that's how laid-back Bruce Willis is: He can burn a layer of skin off his tongue and not miss a beat.

"He's a sweetheart," Emily Blunt, Willis's co-star in Looper, tells me later. "He loves women – I mean in the nicest way." They shared only one shooting day, set on a dusty Louisiana farm. Blunt's character is supposed to be weathered, so she was sitting in the sun. "Bruce got concerned for my pale British skin," Blunt remembers. "In his blood-smeared costume, he came over with the girliest umbrella you can imagine. I don't know where he found it; it looked like a parasol." She laughs. "That's Bruce – that juxtaposition of the tough guy covered in blood who walks around shamelessly holding a parasol."

"His being so subdued and soft-spoken – that's a very powerful thing," Rian Johnson, Looper's writer/director, agrees in a separate interview. "When somebody is talkinglikethis, it makes you lean in. So that's one trait Joe [Gordon-Levitt] tried to incorporate [to play young Willis]. He doesn't have to act forceful and powerful, because he has that confidence."

Confidence helped carry Willis through the darker elements in his role, Johnson adds, "awful deeds that might justifiably have scared off an actor who's protective of his image. But Bruce was game for anything." No matter how amorally Willis's character behaves, however, Johnson discovered in the editing room "how tough it is to get an audience to turn against Bruce Willis. It actually became a problem. We need this big turn to happen, and people just want to trust him."

"Everybody sees the science fiction with Looper, but I didn't," Willis says. "I saw it as a really well-written story, fun to act and an ambitious challenge. To play yourself around a curve."

At this point, I decide to play the runic game, too. Willis has worked for 30 years, headlining films that have racked up $3-billion (U.S.) at the box office in North America alone. He's not only attained a pinnacle of stardom few ever see, but set up camp there and stayed. After all that, where does he see himself on the curve of his life?

"I'm more aware now of how fast time moves," he replies. "I try not to take it for granted. A younger friend just died last week, unexpectedly. That's always a jarring reminder of how short time is. I try to remind myself of that." He pauses. "But I still don't get the math of stardom. It just seems like such an unreal thing. Why don't we get excited about engineers? Why don't we say, 'I want to meet the guy that invented pipes,' or gasoline?

"It was such an accelerated process, from me saying, 'I really like acting,' to this place I'm in now, which gets referred to as stardom," he continues. "Somehow, violently and quickly, I got to this place, where I still don't understand it. I know the word commerce is in there somewhere. For a long time I was embarrassed to take myself seriously about acting. Now I do it to satisfy myself and the director, to tell a good story and to work with other actors, give them feedback as the character. I like that kind of achievement, but it feels like a personal thing. I'm just doing it to try to beat my own game."

I point out that several of his recent roles ask him to confront the difference between his younger and current selves, with varying degrees of rue, including Red, The Expendables franchise, Moonrise Kingdom and now Looper.

"I'm completely comfortable being this age," Willis responds. "I know, from an intellectual point of view, that I'm getting older. I see myself getting older. But I don't feel older yet. I look after myself for the most part, try to eat well. I don't judge myself. When you're in your 50s, the statistical average is, you're gonna be dead in the next 20 to 40 years. While that's not something I think about all the time, it makes me want to have a good day every day. As many good days as I can have."

He smiles, animated at last. "I get to spend time with my daughters," he says. "I have a brand-new baby daughter, which is remarkable. Really remarkable. It feels just like it did the first time, just as fun and exciting. I still don't know what to do, except be loving. So that's good." Pause. "I know that time's going by. But I'm okay with it."

So if he could meet his younger self? "I'd give him a hug," Willis breathes. "And just say, 'It's all gonna be okay. You're gonna be all right.'" 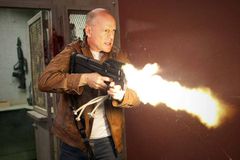 Exactly how long do TIFF celebs stay on the red carpet?
September 6, 2012 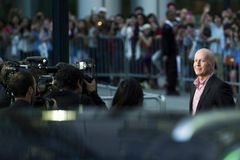