At one point, during Sunday's Cannes press conference for the Todd Haynes film Carol, about a lesbian romance in 1952, Cate Blanchett was obliged to clarify a recent quote from Variety, that the married mother of four had plenty of personal experiences to draw on for her character.

"But in 2015, the point should be: who cares? Call me old fashioned but I thought one's job as an actor was not to present one's boring, small, microscopic universe but to make a psychological connection to another character's experiences."

Haynes' first feature since 2007's unorthodox Bob Dylan biography, I'm Not There, is an adaptation of a novel by Patricia Highsmith, the famed psychological mystery writer best known for Stranger on a Train and the Ripley novels. The book was only her second novel, written under a pseudonym, Claire Morgan, to disguise the autobiographical elements. In the film, Blanchett stars as a lonely, upper-crust married woman who forms a relationship with a young shopgirl, Therese (The Girl with the Dragon Tattoo's Rooney Mara), arguably a young stand-in for the young Highsmith herself. It wasn't until late in her career that she acknowledged she was the author.

In the late 1980s, screenwriter Phyllis Nagy (she wrote the 2005 HBO movie, Mrs. Harris about the Scarsdale Diet doctor murder) was working as a researcher for The New York Times Magazine when she met Highsmith, who had been commissioned to write a walking tour of Brooklyn's Green-Wood Cemetery. The two women became long-distance friends – Highsmith spent the latter part of her life in Switzerland – and the author suggested Nagy might like to adapt one of her novels for the screen.

Highsmith didn't live to see Anthony Minghella's 1999 adaptation of The Talented Mr. Ripley, in which Blanchett had a role. It took another 15 years for Carol to come to fruition, with various directors including Kenneth Branagh attached to the film, before Haynes came on board, though it's hard to imagine a director who would be better suited. Haynes directed 2002's Far From Heaven, starring Dennis Quaid in a kind of companion movie to Carol; he also won a slew of Emmies for his television series of Mildred Pierce, one of the quintessential "women's pictures" of classic Hollywood era.

As expected, Carol is a beautiful film, at times bordering on the over-deliberate, with a kind of wrapped-in-smoke and velvet texture to it. The time period is the Christmas and New Year's holidays of 1952-1953, at a time when, says Haynes "the Cold War was beginning to clamp down". It's a film that reminds the viewer about the act of looking, full of windows, glasses and reflections. As cinematographer Edward Lachman put it, "we were trying to further the work of Mildred Pierce, a kind of soiled naturalistic look using mid-century world of photographers like Vivian Meier."

"The most affecting stories about love are always rooted in point of view," said Haynes. "In Phyllis' screenplay, you're always in the point of view of the more amatory, and thus, less powerful, character. But that changes over the course of the film."

One film he cites is Brief Encounter, David Lean's drama about a more conventional illicit relationship, and, similarly, more interested in the glowing coals than the actual flame.

Most striking, and what makes you want to watch Carol again after a first viewing, is the beautifully lit and photographed faces of the two actresses, with their classic Hollywood sculptural looks. It's like watching Katharine and Audrey Hepburn, illuminated in the same frame. 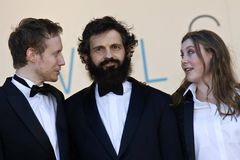 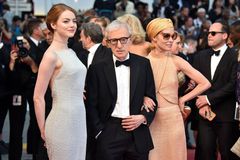 In photos: See which stars came out to Woody Allen's Cannes premiere
Gallery
May 15, 2015 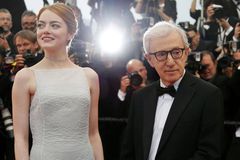