"You just couldn't let me go, could you?"

So asks a suspended Joker, of Batman, in 2008's The Dark Knight.

Has director Christopher Nolan asked himself this ominous question?

During a Friday screening of The Dark Knight Rises, a young man, his hair dyed orange, walked into an Aurora, Colo., theatre and allegedly started shooting. Seventy people were injured and 12, including children, died.

In The Dark Knight, as the arch-villain and caped crusader grapple to the finish, the Joker says that Batman will not kill him because of a misplaced "sense of self-righteousness," and that he will not kill Batman because he's "too much fun."

And this, he says, is "what happens when an unstoppable force meets an immovable object."

There is a disquieting analogue here: In spite of the horrifying mass murder, the film has not been pulled from theatres, because to do so would constitute self-righteous, censorious behaviour. Not to mention the film being just too much fun.

So much fun that when Rotten Tomatoes published negative reviews, critics were threatened with rape and murder, causing the site, in an unprecedented move, to shut down the comment board. The only concession the studio made to the tragedy was to delay its weekend box-office report by a day (it made $160.9-million U.S.) and cancel a few foreign premieres.

"Why so serious?" the Joker – played most definitively by Heath Ledger – is known to ask, his face carved into a scarred smile, and it's not as though we are siding with him.

The all-too-familiar formal grieving process, which includes wreaths and public outpourings of despair, the U.S. President's diligent attention and media remembrances of the victims, is well under way, and the victims are certain to be morbid tabloid stars for a short time.

Yet the steps to this sad dance are too well-rehearsed. Where is there societal rage, equal in force to the violence of the alleged killer? Where is the unstoppable force of public anger?

Is it possible that on occasion – perhaps just this once – a film and the ethos surrounding it should be treated as a volatile substance and removed from our sight?

This is not even an available argument. Instead, cynicism and connect-the-dots logic holds sway.

The cynicism takes the form, in these early days, of tentative jokes and light swipes – for example, Gawker's coverage of what they call the "Dark Knight Shooting," an on-scene observer (and someone who attempted to help the injured) is mocked for his statement to CNN, a "dumb store" is called out for its insensitivity, and an MSNBC reporter is mocked for not being aware of the suspect's uniform's significance.

Finally, superimposed, in red neon, over an image of stunned bystanders, is the floating quotation "It was surreal. IT WAS LIKE A MOVIE."

One day, a critical theorist will build a compelling structural analysis of the queasy series of comic books within movies within movie houses; of killers within killers within killers. To compare, for example, the Joker's particular psychopathy with alleged killer James Holmes's strange dual nature, is naturally tempting, as is the urge to compare the film's message about a discontented Gotham City with our increasingly violent, and increasingly divided world.

And while discourse of any kind, including the barely coherent speech of the traumatized man on CNN, is useful, analyses that seek to shut down or "solve" such monstrous acts are merely illusions, and dangerous ones at that.

The problem being not only random violent acts but the extremes – from lassitude to histrionics – of the public's response to acts of gross mayhem, a response that is never a coherent, graceful shutting down. And by shutting down, I mean censorship, an occasionally good act.

Was this a random act of violence? Philosopher Slavoj Zizek discusses cinematic violence in his book The Parallax View, using characters who suddenly explode (Travis Bickle, for example) as a lens. Rather than dismissing such "outbursts" as "irrational," he posits them as an "implicit admission of impotence," a striking out against "miserable destiny," the "secret awareness that we are all helplessly thrown around by forces out of our control."

If Zizek's idea scarcely apprehends the demonic cruelty of the Joker (a character who haunted Ledger as he prepared for the role), it makes a fair start of apprehending, theoretically, the actions of the alleged shooter – and other tragedies, such as the nearby Columbine massacre and the escalating gun violence in Toronto last week, when a mass shooting occurred at a block party.

While I feel no compassion for the contemporary mass murderers, it does seem likely that they feel both alienated and empowered by an increasingly virtual world, a place where we are all putatively connected, and profoundly apart. Empowered because we can be both ourselves and avatars of ourselves, and as such, very much like cartoon characters – or villains.

Is it really necessary, however, to know precisely why this happened? If we understand, will the violence change or stop?

Unfortunately unlikely, as our ceremonies of grieving and then moving on are so entrenched. It's one thing to feel bad about what happened, but to be asked, as an act of respect and contemplation, not to see the blockbuster Dark Knight Rises! That goes too far!

Back in 1973, as charges of copycat "ultraviolence" flew through London, filmmaker Stanley Kubrick abruptly withdrew A Clockwork Orange from theatres, a ban that was lifted only after 25 years, and cautiously.

Kubrick created a moral high-water mark that has not been repeated. When Oliver Stone's 1994 film Natural Born Killers reportedly inspired a wave of murders, the taciturn director dismissed the allegations as "nonsense" and "hysteria."

The fixed position of the contemporary critic is that art does not cause violence, a position most fiercely held in the face of perceived hicks desperate to ban important work.

But Kubrick was acting as a man in the world, not an artist. He was sickened and sad that his film, however directly or indirectly, caused harm to another human being.

Why should Rotten Tomatoes have to apologize for shutting down threats of bodily harm? And why has this film not been stopped in its tracks, in the face of the fans and out of respect for the victims?

This is what happens when the unstoppable force of violence meets the immovable object that is money, the making of this cold, hard mass.

Obama, Romney back gun owners as they decry shootings
July 23, 2012 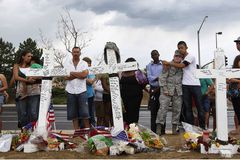 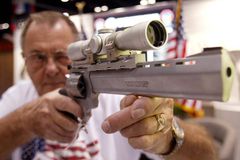 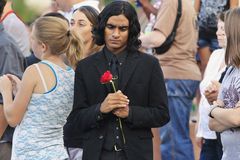 Opinion
America has surrendered to the NRA
July 24, 2012