If you look like an alien, chances are you're going to get cast as an alien. Not that the actress Famke Janssen isn't gorgeous – she is. But her beauty is fiercer, more challenging than the easy prettiness that Hollywood tends to reward.

First of all, she stands nearly six feet tall in black leather ballet flats. In the Toronto hotel room where we met this week, she kept her insanely long legs contained underneath her chic black-and-white dress, but they were everywhere nonetheless.

Second, there's the matter of her bone structure: "Strong" doesn't begin to cover it. Her bone structure is imperious. Then there's her voice, deeper than many men's, growly, authoritative and inflected by her native Dutch. (Born in the Netherlands in 1965, she moved to New York City at age 20 to be a model, and lives there still.)

Finally, there are Janssen's eyes. They're dark as wet tar, yet they emanate this amber glow. This makes them both mesmerizing and hard to gaze into, and it makes anyone who tries automatically feel submissive.

"I am nothing like the characters I tend to play," Janssen says. "But I know I look like I would be like that. Of course, over the years I've tried to go against type and do different things. But these roles keep coming back."

Janssen's imposing mien helped land her breakthrough role, as the assassin Xenia Onatopp in the 1995 Bond film Goldeneye. It also explains why she's played a mutant (Jean Grey in the X-Men movies, the character who needs the fewest special effects); a witch (in Hansel & Gretel: Witch Hunters); a transgendered life coach (in Nip/Tuck); and a wife who instantly makes her husband more interesting just by standing at his side (opposite Liam Neeson in the Taken franchise, whose third instalment is due in January).

It also explains why Janssen was a natural to play Olivia Godfrey, the ageless matriarch of a sinister clan, in the Emmy-nominated Netflix series Hemlock Grove (season two began streaming July 11). Created by gore-monger Eli Roth, and shot in and around Toronto, the show is set in a fictional Pennsylvania town populated by vampires, werewolves and other assorted freaks. Every episode is drenched in blood – eyeballs pop out, rotting fingers are snapped off, hearts are pulled from chests and dropped, still beating, to the ground. But Janssen makes Olivia the scariest thing about it, the baddie you root for, who'll sacrifice anyone, including her children and lover, to get what she wants.

"It's about the monster within – who is actually a monster, when you peel back their layers," Janssen says.

"All the writers love writing for Famke," said Charles "Chick" Eglee, an executive producer of season two, in a separate interview. (Before Hemlock Grove, he worked on, among other series, The Shield, Dexter and The Walking Dead.) "I had no idea when I started this show what an enormous instrument she has. She can do anything. Watching her perform is like light shimmering on a jewel – it can shift in a moment, from vulnerability to wickedness to sarcasm to humour. She walks this fine line of being aware she's in the pushed universe of the show, without ever taking it into camp."

So it's ironic that Janssen personally has no taste for grisly stuff. "I'm not a fan," she says, shaking her head. "I'm very nervous about it. I've been asked to be part of it throughout my career, a lot, but I'm squeamish." When she passes the shredded-corpse models on the set, she averts her eyes. And when the gory bits air, she fast-forwards.

Her taste runs more to movies from the 1930s and the 1970s, two decades when being born to play strong female characters was an asset, not a liability. "Women were so delicious then, unique and witty and dark," Janssen says. "Then I don't know what happened. Women were pushed to the background. It's the wrong direction, as far as I'm concerned."

Janssen fights the typecasting by signing on to independent films that showcase more sides of her, such as 2008's The Wackness, and the upcoming Jack of the Red Hearts, in which she plays the mother of an autistic daughter. She's also a United Nations Goodwill Ambassador, and has thrown herself into screenwriting and directing. Her first feature as writer-director, 2011's Bringing Up Bobby, starred Milla Jovovich as a con artist and single mother, and Janssen's currently writing the script for what she hopes will be her second, based on the 1975 novel J R, by the postmodernist pioneer William Gaddis.

"For the last year, I've been writing non-stop," Janssen says. "I don't have a lot of free time, but it doesn't matter because I write at night, morning, in between takes, on planes. Wherever I can, I write. I love it."

Janssen claims to relish a challenge, and anyone who knows Gaddis's National Book Award-winning novel, which is about an 11-year-old who builds a financial empire after a class trip to the stock exchange, will agree. It's written entirely in unattributed dialogue, almost 800 pages of it. "It took me months just to fine-tune who's speaking," Janssen says. "But it's both timeless and timely. What's better to satirize at this point than Wall Street? I love a good, dark sense of humour, and the book has that in spades."

The actress has never typecast herself, that's for sure. As a kid, Janssen was a tomboy, then a serious academic, studying economics for a year at the University of Amsterdam. As a model, she worked for Chanel and Victoria's Secret, then quit to study literature at Columbia University. In 1995, she married the director Tod Williams (The Door in the Floor, Paranormal Activity 2); they divorced five years later. She's a devoted dog owner, museum-goer, Zumba class-taker and Film Forum frequenter, but when she first moved to Manhattan she was so influenced by violent American films that she was afraid to leave her "very posh Upper East Side hotel room."

"I've never had a mentor," Janssen says. "I've always created my own path. And the most difficult one, clearly. Always uphill."

She still feels like her adopted city is one big movie set. "I'm constantly walking down the street thinking: 'This reminds me of Prince of the City or Dog Day Afternoon,'" she says, laughing. But only the exciting parts. And no aliens. 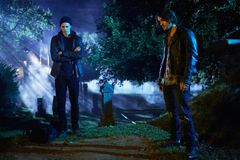 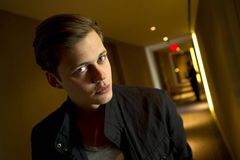 The Bond Awards: Our favourite Bond moments of the last 50 years
November 8, 2012 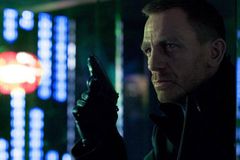