Punctuationitis. It's the dizzying condition that afflicts anyone looking at a list of the highest-grossing films of 2011 in the United States and Canada. (It's also known as the sequel to Sequelitis.) It's what happens when the movie theatres are riddled with multipart series, remakes and franchise reboots, necessitating title punctuation that would have confounded Strunk and White.

The top seven films at the domestic box office in the year just ended, in ascending order, are Cars 2; Fast Five; Pirates of the Caribbean: On Stranger Tides; The Hangover Part II; The Twilight Saga: Breaking Dawn Part 1; Transformers: Dark of the Moon; and Harry Potter and the Deathly Hallows Part 2, the champ with a $381-million (U.S.) gross.

Or, in other words: a sequel that uses a numeral; a quintquel that spells out its number in its title; a quadquel that omits all numbers but employs a colon; a sequel denoted by a Roman numeral; a triquel that's the first part of an adaptation of book three in a trio; a quadquel that opts only for a colon; and the seventh film from the sixth novel of a series that, until the final book was split into two movies, eschewed all numerals, numbers and punctuation marks in favour of a conjunction (i.e., Harry Potter and the Goblet of Fire, Harry Potter and the Sorcerer's Stone, et al.).

Are you still with me? I hope so, because the craziness doesn't end there. Scrolling down the list to No. 14, we find X-Men: First Class, a prequel to a comic book film trio that uses both a hyphen and a colon; and, at No. 18, the finger-cramping Mission: Impossible – Ghost Protocol, employing a dash and a colon and no number, though it is the fourth in a franchise, and a reboot of a TV series.

I can only imagine the marketing-department meetings, thick with copy editors and grammarians fighting valiantly to parse their titles. Did someone get fired for deciding to spell out Happy Feet Two, which hit only No. 50 on the list? Super 8 managed to come in at No. 20, despite the fact that it wasn't a sequel – though I'm sure some ticket buyers stayed away because they thought they'd missed Super's 1 through 7. And what will they call the sequel? Super 9? Super 8.2? Ditto for I Am Number Four at No. 56 – where were I Am's One through Three? Maybe 50/50 climbed only to No. 90 because audiences were scratching their heads about the other 49.

Seriously, though, what are we to make of 2011's box-office hits? Rounding out the Top 10 were two comic-book movies (Thor and Captain America: The First Avenger) and a series reboot (Rise of the Planet of the Apes). Clearly, all three are expecting to be back, with more numerals in their titles and more dollars in their coffers. Only at Nos. 11 (The Help) and 12 (Bridesmaids) did original films surface, and they had to share the rest of the Top 20 with five more sequels, including Kung Fu Panda 2 (numeral; no punctuation) and Sherlock Holmes: A Game of Shadows (colon but no number).

Meanwhile, all year long, those of us whose ears are attuned to this particular frequency have heard nothing but an extended wail out of Hollywood – because, despite the fact that the Top 100 films earned a combined total of about $8.5-billion (U.S.), the box office was consistently down this year compared to previous years, weekend per weekend and title per title. Audiences were buying the numerals and colons, but not as much as we used to.

Then this week, the Producers Guild of America – the individuals who actually make all these movies – released their 10 nominees for best picture. As usual, the Artful and the Profitable did not often intersect. The PGA announced its list in alphabetical order, but arranged by their 2011 grosses, they are The Help (No. 11), Bridesmaids (No. 12), Moneyball (No. 42 – note the steep drop there), The Girl with the Dragon Tattoo (No. 51), Midnight in Paris (No. 54), Hugo (No. 63), War Horse (No. 67), The Ides of March (No. 72), The Descendants (No. 73), and – what many consider to be the Oscar front-runner – The Artist, tiptoeing in at No. 146.

Now, anyone rational would look at those two lists and wonder: Why aren't more "good" movies profitable? Why aren't more profitable movies good? And hey, hmm, why isn't there a single number, numeral or colon on that nominee list?

Perhaps if Hollywood were serious about climbing out of its alleged slump and giving audiences different and better choices that would in turn goose the box office, it would try to release more original pictures: movies like Nos. 11, 12, and even 42 and 67, that can earn both money and acclaim. Look at Woody Allen's example – No. 54 is his highest-grossing movie ever, in a career that spans six decades, with, I might add, not a sequel in the bunch.

In other words, rather than recalling the problems behind the slump, we'll get prodded to see Total Recall (2012). Rather than a new dawn, we'll line up for Red Dawn (2012) and The Twilight Saga: Breaking Dawn Part 2. Rather than demand to go somewhere fresh, we'll take The Hobbit: An Unexpected Journey. And will it make us happy, to see Les Misérables (2012)? Or will we continue to be The 3 Stooges?

It's up to us to vote with our wallets. The movies we get, we deserve.

Liam Neeson in winter, filming The Grey
January 20, 2012
Gary Oldman gets a Cold War role worth waiting for
December 16, 2011 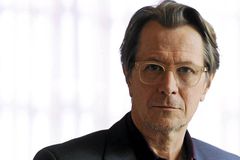 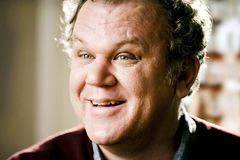