Cinderella's faceted glass slipper gleams nearby, on display under pinlights like a trophy. Although the fairy-tale icon is more prop than costume – it's unwearable crystal – it was created after months of prototypes from Swarovski by costume designer Sandy Powell. The three-time Academy Award-winner was inspired by a 19th-century shoe in the Northampton Museum's extensive footwear archive.

By the time of her visit to Canada last October, Powell had seen the finished version of her work in Kenneth Branagh's Cinderella. But I had not, so we sat among mannequins wearing key costumes from the film to examine the details up close. In every possible way the film is lush, from the rich performances to the faille and cut-velvet furniture and even background players' costumes, all enthusiastically trimmed in gilt and galloon whether castle guards or lizard footman.

A vast hall in downtown Toronto was set up as a partial reproduction of Cinderella's Pinewood Studios set, complete with pumpkin coach, hand-painted wallpapered rooms and a miniature ballroom, all the work of production designer Dante Ferretti and his team, with whom Powell worked closely. Ella's father is a merchant in the shipping trade, so their home is decorated with exotic finds, such as Coromandel screens and Asian ceramics. The blossom wallpaper and floral upholstery are a motif of a piece with the blooms on the costumes worn by both Ella (Lily James) and her late mother early in the film.

Although Ella has few costumes – a servant in her own home, she spends most of the movie in a tattered aqua dress – her one major costume change is the most famous in cinema. It's not a dress so much as the Dress. The simple but voluminous blue gown she wears to the palace ball took Powell the longest to create and build, and the desired effect was that of a watercolour. With 270 yards of fabric, dotted with butterflies and more than 10,000 Swarovski crystals, it shares a similar summer-sky hue with the one in the classic Disney 1950 animation, a choice Powell insists she didn't consciously make. "It didn't even occur to me – no one from Disney said anything. Strangely, I went through a whole bunch of other colours, but kept coming back to a specific shade of blue."

Except the blue is not actually blue. "It's made up of lots of different colours and painted – there's green in there," she says, fluttering at what seems like the top-most thousandth gossamer layer, "and there's lavender and purple. When you see her dance, there are layers and layers of petticoats," Powell adds. "It's like structural engineering." Another example of art direction co-ordination: The butterflies on the Dress and the glass slippers are also decorative elements in Ella's home, as specimens suspended under glass domes (metaphor alert?).

In a short clip that plays on repeat in the next room, Ella's fairy godmother waves her wand in a sparkling, iridescent white gown that brings to mind Billie Burke's goodly Oz witch. Just as avant-garde designer Hussein Chalayan did in the late 1990s, Powell designed the frothy, winged white dress to incorporate 400 LED lights. "Originally I wanted her [Ella] to light up at the ball," she reveals. "But I'm glad I didn't, because that would have been too much, to look like a bedside lamp," Powell laughs. The fairy godmother has an excuse, because she's magic. "We worked with a lighting company and then visual effects amped it up."

The use of special effects in the famous transformation sequence also influenced the costume concept in other ways. "With the beggar-woman turning into the fairy godmother, it's two completely different [outfits] but just ever so slightly in the construction of them I wanted one to look like it could turn into the other, because I didn't know how they were going to do it," she says. "So I kind of gave them things that would work, like the hood shape [on the brown cloak] that could then turn into the collar shape on the dress."

Actress Helena Bonham Carter has a distinctive off-screen style persona (she favours wild coifs and period-influenced Vivienne Westwood dresses, for one thing), one that arguably has seeped into the design of recent on-screen roles, frizzy, dishevelled and eccentric magpies such as Sweeney Todd's Mrs. Lovett or Les Misérables' Madame Thénardier. "No, no, no, I was absolutely, definitely going against Helena," Powell recalls with a grin. "I said we're not doing Helena as Helena in a Tim Burton. Though she is corseted, I hope she doesn't look too much like all the ones she's played. And, quite specifically, I said she's not going to have messy hair, she's going to have tidy hair. Tidy hair, Helena, for this one!"

The men, while often also in blue, are more firmly rooted in 19th-century tailoring. "All I did to modernize them is give them square shoulder pads," Powell says, then pauses and admits that the charming Prince (Richard Madden) does have a bit of 1940s inspiration. "The reference is Laurence Olivier in the 19th-century films [set in the 19th century]That Hamilton Woman, Pride and Prejudice] – that's what I was looking at," she says. "The rest of it, the tight trousers – and yes, I made them a little bit tight! – that very slimline look I think is a sexy look for men, so I kept the men pretty much in period." (Sexy, indeed: Madden's snug breeches strain the limits of PG-13.)

Stepsisters Anastasia and Drisella are mean girls in matching ringlets and busy, over-the-top, reverse-colour-co-ordinated outfits that reflect their rotten personalities (even their mother doesn't seem to like them much). Powell turned up the garishness and treated the pair as a unit – even with the actresses during preparation. "I did the fittings with the sisters together, every time, not individually. And what happened is that, during those fittings, they really built up that messing-around, bickering, funny relationship," she says. Their frenetic costumes are a foil for their mother's sophisticated chic.

Mirror, mirror on the wall, who's the fairest of them all? The most iconic costume isn't necessarily the most chic – though in fairness to Ella, fairy-tale villainy and vanity are often intertwined. Lady Tremaine, the wicked stepmother played by Cate Blanchett, is most high-fashion-influenced. In Tremaine's many show-stopping sculpted skirts and dresses – most often rendered in shades of bilious yellow and poison-green silk crepe and charmeuse – I see the shadow of Jacques Fath dresses, and in her asymmetrical cocktail hats, echoes of Paris milliner Madame Paulette's net-and-feather headpieces. It's what Powell calls a 1940s haute couture take on 19th-century costume. The penchant for memorable historical mash-up dates back to Powell's early work with director Derek Jarman (and his frequent muse Tilda Swinton), such as the clever incongruity of Swinton in stylized retro 1950s fashion in Edward II, his otherwise modern adaptation of Marlowe's Elizabethan drama.

"Marlene Dietrich, Joan Crawford and quite a lot of fashion imagery, quite severe," are what Powell claims were the starting points for Blanchett; Powell also designed Blanchett's costumes in The Aviator (a film for which both won Academy Awards). Specifically, the look is Dietrich's swaggering gold-digger in The Flame of New Orleans. Like Cinderella, the 1941 film is set in the mid-19th century, "which is hysterical, because she's got shoulder pads!" Powell says. "And the pointy bosoms. So that's how I wanted to do Cate as the stepmother." There's a bit of Charles James in the drape, a bit of Dior, Powell says, "and that Cecil Beaton photograph [1948], I always use it as a reference whatever I'm doing." Alongside those references were 19th-century images, "particular paintings like that Sargent, Madame X."

So Blanchett dons several vintage parures by Joseff of Hollywood, the costume-jewellery supplier of the 1940s that was renowned for gold-tone sets. Swarovski supplied 1.7 million crystals to the Cinderella costume department, and off-screen, Powell has just launched the Tremaine collection in collaboration with Atelier Swarovski: the four golden leaf-motif statement pieces have, like Tremaine's personality, a bit of the choking vine about them, but they channel the Hollywood Golden Age glamour of Blanchett's character. While viewers may relish cruelty getting its just desserts, it was a shame that, once banished from the kingdom, the chic devil had to take that fabulous wardrobe with her. 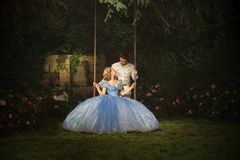 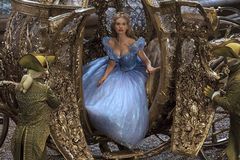