When director Cristian Mungiu had a major breakthrough with 4 Months, 3 Weeks and 2 Days, his Palme d'Or winner about a college girl trying to secure an illegal abortion under the Nicolae Ceausescu dictatorship, one spectator complained that he was making movies that were too much for the film-festival crowd and not enough for regular Romanian viewers. His response was to create Tales from the Golden Age, a compendium of blackly comic real-life stories, directed by him and four others who had reached adulthood around 1989, when the Ceausescu regime fell.

They are true-story stories for sure, though they have variations, and people place them in different times and places. I think of this - and my last film - as an urban legends trilogy. In Romania, Tales from the Golden Age was released as two separate films, broken into tales of love and tales of authority. The international version has five films and what you see is a selection which varies from country to country. In Cannes, we did three different screenings with different episodes in each screening.

It was sort of our homage to life under communism: You never know what you're going to get. We all remember people queuing from midnight to morning just to hold their position in the queue, and in the morning, perhaps you'd get milk or bread. You never knew.

Were these stories that you discovered through research or were they known to you before?

I knew the stories. Some I read about as articles, particularly the ones involving the police. My father subscribed to the party newspaper and you had a choice of another publication so he picked the monthly police paper, which was very interesting because it was less polluted by censorship than most publications. We also did further research and interviews. I spoke to a journalist who had written about the policeman and the pig, for example. That story actually ended tragically: Two people jumped to their death.

In all, we came up with 15 stories and there were six that we shot, which weren't the most spectacular but the ones that had the most to say about the system. After, I held a contest for the best urban myth from the communist era and I'm publishing the best that I've found.

Why don't you identify the films according to who directed them?

Because this is a collective film and we're part of a greater good. Actually, we discovered in Cannes, during our first interviews, that it didn't matter. One of the good things we happened to achieve was that there was a certain consistent tone across the films that make it work as one film without doing anything too clichéd like having characters cross between stories.

Most of these stories are humorous, but there's always a threat that someone may get thrown in jail for saying the wrong thing. Was there any context where people could openly say, "This is insane"?

At home, where the music was loud. The truth was everyone was speaking about it somehow - the system was allowing this to happen as a form of relieving the pressure in the midst of food shortages and other problems. If you wanted to say Ceausescu was insane, you just wouldn't yell it in the public square. It was more like, "Is anyone listening to us? I'm going to tell you a good one." We were in terrible fear of the hidden microphone. One thing we believed was that all our houses were bugged.

After communism collapsed, we realized that a lot of this was in our heads so we censored ourselves, and it worked. Now that the files have been opened, you can see it was the people who were close to you who were actually reporting to the secret police. You travelled on a train in 1983 without a ticket. That's in your file. A lot of people have rediscovered lost family photographs because the secret police went into their houses and copied them all and now they're turning up in their files.

In The Legend of the Air Sellers, there's a couple who see themselves as a modern Bonnie and Clyde. How important were foreign videotapes in the eighties?

Because nothing much was happening in real life, people projected their fantasies of freedom on these illegal videos and foreign films. The quality didn't really matter. That was my first education in film. It was impossible to go to film school unless your parents were actors or you had connections with people in power. So I worked as a journalist and a teacher for a while and, for a time, I made a living holding public screenings of videos. I had a collection of about 200 of them from friends across the border. It was tolerated. I translated the films and introduced them and it was a good education. It wasn't only American films, but Kieslowski, Fellini and Antonioni, and people developed a real taste for that kind of cinema. 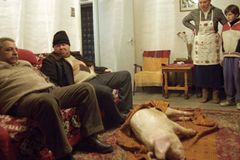