The title of the latest James Bond adventure, Spectre, is itself a sort of tease. Those familiar with the Ian Fleming corpus will recognize it at once as the name of the English author's second-most enduring literary invention: SPECTRE, or the Special Executive for Counterintelligence, Terrorism, Revenge and Extortion, a crime syndicate responsible for various failed claims to global domination. It's quite a surprise, this sudden re-emergence of SPECTRE. It was a fixture of the novels and the early films – but we haven't seen its members in action on screen in 44 years. The return poses an obvious question: Why have James Bond's most notorious adversaries been missing for nearly half a century?

The answer, like the machinations of SPECTRE in many of Fleming's stories, is difficult to explain. In the beginning there was Ian Lancaster Fleming: The former British naval intelligence officer and newspaperman published his first work of fiction, an espionage thriller about a secret-service agent named James Bond, called Casino Royale, in 1953, and thereafter wrote a Bond book a year until he died in 1964. It was something of a phenomenon. But the suave British super-spy couldn't remain confined to the page. Agent 007, of course, lent himself exceptionally well to the motion pictures – and that's when the trouble started. Fleming's initial efforts to put together a James Bond film proved so disastrous that the repercussions would embroil the franchise for another 50 years.

In 1957, Fleming met Kevin McClory, an Irish self-made writer, producer, director with ties to a number of Hollywood luminaries. Fleming and McClory agreed to collaborate on a Bond adaptation and set to work together – alongside screenwriter Jack Whittingham – on an original story called Longitude 78 West, about a terrorist organization that holds the world's superpowers at ransom with a pair of stolen nuclear warheads. Through the end of the decade, the trio honed a battery of treatments and rough drafts into a completed screenplay, which Fleming, objecting to the placeholder, retitled Thunderball. In January of 1960, Fleming met with McClory and Whittingham and the three agreed that the film should move ahead and that McClory should oversee the project as producer.

Two months later, McClory and Whittingham received a copy of Fleming's latest novel: Thunderball, in effect an adaptation of their screenplay. It was set to be published the following spring. McClory and Whittingham were furious – they'd been blindsided by their own collaborator, their contributions not only to this specific story but the developing character of James Bond having been wiped with a flourish from the public record. So they sued. In 1963, the English High Court heard the case of McClory v. Fleming. It was decided that Fleming should retain the rights to Thunderball the novel – to be printed from that date forward as a work co-authored by McClory, Whittingham and Fleming – but that McClory should be granted rights to any prospective Thunderball film. McClory and Whittingham were free to make a Bond film with the material that was rightfully their own and should anyone wish to make one on their behalf they were to be compensated handsomely for it.

This seems a reasonable compromise, particularly when you consider the immediate outcome: In 1965, producer Albert R. Broccoli and his company Eon Productions made Thunderball, the fourth canonical film in the Bond franchise – and McClory got to produce. And then, nearly 20 years later, McClory adapted it once more on his own: Never Say Never Again, released in 1983, found Sean Connery reprising his most famous role in an aberrant little picture best-remembered now as the notoriously "unofficial" 007 outing.

Fleming's people didn't want him to make Never Say Never Again, mainly because they were still making Bond movies of their own and didn't want to confuse their reliable audience. But their continued efforts to excise McClory from Bond's legacy only confirmed in court what McClory had long maintained: His claim to the Bond legacy extended much further than a single screenplay. Thunderball, was intended to be the first time that Bond would grace the silver screen. He had therefore played an essential role in developing the character of Bond as he's recognized by half the world.

McClory could prove that at least one such aspect of 007's cinematic life belonged to him: Bond's long-time nemesis, SPECTRE, was the product of his Thunderball script. In the 1970s, McClory disputed the appearance of SPECTRE in the non-Thunderball Bond films. (They'd popped up in almost every film since the first.) And so after Diamonds Are Forever, the terrorist organization and its leader Blofeld were never again permitted to be so much as mentioned on screen. McClory couldn't stop Broccoli and company from making a fortune on Bond pictures. But he could thwart their most memorable baddies .

The history of the cinema, unfortunately for McClory, tends toward conglomeration. Thus the discord between McClory and the Fleming estate was amicably settled. McClory died in 2006. A few years later, his heirs sold his rights to all things Bond, returning everything – SPECTRE included – to the people responsible for two dozen Bond films to date. No doubt McClory would be devastated to see the hero he once worked on squaring off again, at long last, with the supercriminals he helped conceive. But for Bond aficionados there is no happier ending to the saga than the one that brings us Spectre. 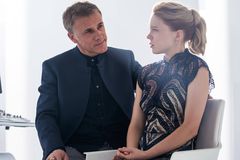 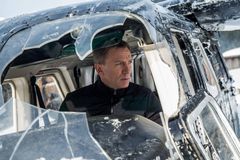