There's a school of thought that says one key to realizing a goal, be it a job or a better physique, is to use the technique of visualization. Johnny Ma may not have read much, if any, visualization literature when he was 15. But there's no denying he was a big dreamer at that age. And in dreams begin responsibilities.

Interviewed this past September during the Toronto International Film Festival where his first feature, Old Stone, was having its North American premiere, Ma recalled lying awake at night in the family home in Vancouver, his imagination on fire with what he called "these fantasies."

"I wanted to be Wayne Gretzky," he said. "I wanted to play for the Yankees. I wanted to be an actor – Raging Bull for me was the pinnacle of what a film could be, from every standpoint. So I saw myself getting drafted to play hockey at 16 and then, after a couple of years, I'd play baseball and then I'd meet Meg Ryan and I'd start dating her and then I'd get the opportunity to act in one of her films …"

Ma, who's 34 now and still Vancouver-based, was so besotted by these visions that he actually took theatre in his first year at the University of British Columbia. However, without getting into specifics, he said he "embarrassed" himself and soon was being nudged into a finance and commerce degree by his businessman father and his linguistics-professor mother. "It was a very typical Asian thing," noted Ma, who, born Nan Ma in Shanghai, had immigrated to Canada with his family in 1992. "Practical-oriented parents who wanted to make sure I was going to be okay."

Ma, in fact, seems to be doing more than okay. Old Stone, a taut, absorbing nightmare of a film that's alternately social-realist drama and thriller noir, scored positive notices from Variety and the Hollywood Reporter, among others, upon its world premiere at the 2016 Berlin International Film Festival. New York's Zeitgeist Films picked up U.S. rights shortly thereafter and launched Old Stone's commercial run this past fall in New York and Los Angeles. It won the $15,000 City of Toronto Award for Best Canadian First Feature Film at this past year's TIFF, where jurors lauded the film as a "remarkably mature, powerfully rendered portrait of an innocent taxi driver caught in a proto-capitalist China." And on Sunday, Old Stone is up for five Canadian Screen Awards, including best picture. (Ma is already the recipient of the CSA for best first feature, which was announced this past month.)

Even with his finance and commerce degree, Ma always planned, eventually, to do something he "really wanted, like maybe be involved in the film industry, or writing or photography." At the same time, Ma figured it would take him until at least the age of 35 before he was "financially stable enough" to do that. Accordingly, he spent the years immediately after graduation working in the international financial sector and fashion industry, travelling a lot, living in cities like Vienna and Singapore.

Then at 26, while on the job in India for an Italian fashion company, Ma contracted hepatitis E. A doctor told him (mistakenly, it turned out) that he had only a 25-per-cent chance of surviving the virus. He went into hospital as part of a non-work regimen that was supposed to last three months. However, he checked himself out after a month and returned to work for the better part of a year, "living like a monk."

"I was scared of everything," he recalled. "I thought 'this is the end.' And by the end of the project, I realized I'd done it all just so one big boss in Italy could look on his computer and see how much money he was making. That was the whole point. There was no value to it." So Ma quit, then went to China to travel in the mountains for two months. After that, "I wasn't afraid any more."

At the time, Ma had a girlfriend who was "in the documentary business and I kinda slid into that." Initially, he wasn't very impressed with the film world: "People were so incompetent and crazy." But he persevered. "I just wanted to be part of something that would live on. Like Raging Bull. Maybe, I thought, I'll be a gaffer." Instead, in 2010 he entered the MFA program in screenwriting and directing at New York's Columbia University. Over the next four years he made four shorts, all different but each distinguished by a fluid, nervy direction and a dab hand at narrative compression.

The last, 2013's Grand Canal – its 19 minutes have been described as "a Greek tragedy told in Chinese pop music" – was shot entirely in China as Ma's Columbia thesis film. A success internationally (it played more than 30 festivals worldwide, including TIFF 2013), it went on to serve as Ma's entrée to the larger world of Chinese cinema, including investors, performers and craft personnel. This proved invaluable when, in 2015, Ma journeyed again to China, this time to the Guangde region, to research and shoot what became Old Stone.

Ma's preferred method is to go to a location, hang out there for a while and then create a story around it, the people he's met and the anecdotes he's been told. With Old Stone, reading a Chinese newspaper article already had twigged him to the idea of exploring what happens when an act of Good Samaritanism leads to a series of unintended and harrowing consequences, including the madness of the benefactor. Concerned, though, about making "poverty porn" and not wanting "the discussion of this film to be about China – too easy –," Ma initially set his script in a lawless Detroit, à la Jim Jarmusch's Only Lovers Left Alive, courting Michael Shannon (Nocturnal Animals, Revolutionary Road) as the lead, before he eventually relocated the drama to urban China.

Old Stone, in fact, was supposed to be Ma's second film but moved to the head of the line when he couldn't get sufficient financing for the ostensible first. That project, Ten Thousand Happiness, remains in the "much-anticipated" category, not least because in 2013 it won the inaugural Beijing International Screenwriting Competition and the Telefilm Canada Pitch This! contest the next year. Ma's script – it's about how a large, powerful Beijing family is rocked to its foundations when the grandparents announce they're divorcing after 65 years –– also was chosen in 2014 for the Sundance Institute's Directors and Screenwriters Labs.

Ma confessed he thought he'd "maybe outgrown" Ten Thousand Happiness. "After you make your first feature, sometimes the thing or the things you've done before aren't really that good." But when he looked at the script again this past summer, he felt it still held up. Now the hope is that Old Stone's success with critics will translate into the same among the public and make it easier to finance Ten Thousand Happiness. If that and script revisions and casting go well, principal photography could start this year, he said.

Ma conveys competence and confidence. But appearances can be deceiving. "The biggest lesson I've learned through my film career is fear," he told me. "That drives everything. Others may be weakened by fear but I look for that fear. When I feel it, I know that's what I have to do. If I'm not afraid, then something's really wrong; this film has no tension. To make something good, you have to fail at the original idea of what you wanted to make and then something new and good can come out of it. I push myself to fail so that I can succeed. I look for that feeling of fear or just the unknown."

Asked if his practical parents are cutting him some slack as a filmmaker in light of Old Stone's positive reception, Ma smiled. "They're coming around; they see there are people who believe in me." Still, it wasn't that long ago they were saying, "'Well, if this doesn't work out, maybe you could work in commercials, advertising.…'" 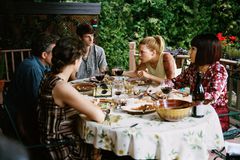 For Kevan Funk, film is a forum to challenge Canadian identity
April 14, 2017
TIFF praises little-known Canadian movies with Top Ten Film Festival
April 11, 2017
Follow James Adams on Twitter @Jglobeadams
Report an error Editorial code of conduct
Due to technical reasons, we have temporarily removed commenting from our articles. We hope to have this fixed soon. Thank you for your patience. If you are looking to give feedback on our new site, please send it along to feedback@globeandmail.com. If you want to write a letter to the editor, please forward to letters@globeandmail.com.
Comments