When the coming-of-age film Victoria Day had its first public screening at Sundance in January, first-time director David Bezmozgis was in the audience, feeling just a little bit sick.

Grappling with both anticipation and dread, the Toronto-based author says his emotions that day were similar to how he felt waiting for the literary reviews to come in for his debut short-story collection, Natasha and Other Stories, five years ago.

In both instances, however, his fears were for naught. Natasha and Other Stories drew rave reviews when it was published in 2004. And Victoria Day - which screened five times at Sundance - sold out at each showing.

"It was the first time we showed the film anywhere, and you never quite know how it's going to play. You sit in the theatre and you're nervous," says the 36-year-old. "But people laughed in places where I really wanted them to. And the response was just so energetic. Of course, then I worried that maybe their response was just an anomaly ... but the film actually translated from screening to screening, which is really all you can hope for."

With both his debut feature film and his book, Bezmozgis, whose family moved to Canada in 1980 from Latvia during the exodus of Soviet Jews, draws heavily on his experiences growing up an immigrant in the Toronto suburb of Thornhill to shape his narrative.

A firm believer that art should be rooted in reality, his film - like the short stories - revolves around the every day experiences of people from his world. Like Bezmozgis, the main character in Victoria Day is an only child. And over the course of a 21-day shoot, the director stayed close to his old neighbourhood, taking the camera to his parent's split-level home at Toronto's Bathurst and Steeles Streets, to Earl Bales Park (where he drank beer, played guitar and shot hand-held fireworks with his friends) and Collegiate Arena (where he played hockey).

His aim, he says, was to make a film about "what teenage life is really like. And the thing I find most gratifying to hear from audiences is when they say how real it is. That this is what it felt like for them, too, to be a teenager."

Victoria Day, which opened in Toronto and Vancouver on Friday, is the story of 16-year-old teenager Ben Spektor (played by Gemini-nominated actor Mark Rendall), who is grappling with new-world opportunities and old-world expectations. It is May, 1988. The school year comes to a close, and Spektor goes to a Bob Dylan concert, where he sees a hockey teammate (who asks him for money) do a drug deal. The kid goes missing. And over the course of a week, Spektor's life is changed. He moves from childhood to adulthood.

Bezmozgis wrote the script for Victoria Day in 2000, well before the publication of Natasha and Other Stories, shortly after graduating from film school at the University of Southern California. He moved back to Canada soon after. It took him eight years to get this $2.5-million picture finished and in theatres.

"I wrote this script with the intention of coming back and having something that I could try to get made. It was all purely conjectural. I'd never made a movie. I'd never had anything published or produced. But I wanted to make a movie about this point in time. In this setting. This community. It was just what interested me."

The cast is made up of mostly unknowns. Spektor's Russian parents - Nataliya Alyexeyenko and Sergiy Kotelenets - were found through open calls placed in the local Russian press.

"John I found at a high-school musical at Earl Haig [Secondary School] He was playing Judas in Jesus Christ Superstar," says Bezmozgis, who adds the Hamilton-born Beaudin had the most experience of the lot, having worked as a child actor.

"Holly, too, had done very little acting. But I wanted real kids. If I'd hired a woman in her early 20s to play Cayla - especially for the sexual scenes - there would not have been that vulnerability.

"I never saw it as a risk casting inexperienced actors because I wouldn't have made the film otherwise. They had to be teenagers. And they had to have that sort of ineffable quality you get by looking at people who are actually that age, realistically portraying themselves."

Now that Victoria Day is in theatres, Bezmozgis - who has an honours degree in English literature from McGill University - plans to return to a novel he started in 2004. Again, it's semi-autobiographical, but pre-dates Natasha and is set mostly in the former Soviet Union and Rome.

After that is complete, he says he hopes to try his hand at another feature film. "I like directing," he explains. "I like working with people and being in a collaborative setting. I like solving problems on a day-to-day level.

"The language of film is very different from writing. And I like having the various ways of expressing myself. If, going forward, I'm fortunate enough to be able to straddle both mediums of storytelling, well then, I would be very happy." 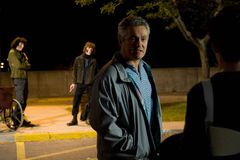