'The writer is double," the author Alan Bennett muses in his novella The Lady in the Van. One duality simply lives, the other lives to write. These two Bennetts speak to each other once again in the new film from England's raconteur laureate.

The Victorian literary imagination had the madwoman in the attic; 1970s Alan Bennett has the eccentric in the driveway. The string of autobiographical incidents in The Lady in the Van detail Bennett's not-quite-friendship with a transient woman named Miss Shepherd, who, through squatters' rights, famously took up residence in her van outside Bennett's home in North London. A smelly, combative and sometimes delusional vagrant with a persecution complex, she remained there until her death in 1989.

Bennett first published his story as a diaristic remembrance in the London Review of Books, then as a novella, radio play and stage play that begat director Nicholas Hytner's 1999 production in the West End. In a succession of inventive headgear (a Rambo cap being a particular favourite), Dame Maggie Smith, 81, reprises the role she created in that smash stage hit.

As many a theatre critic has cautioned, Bennett is not the cozy writer he at first appears – not least because of formal, even avant-garde, experiments such as The Lady in the Van. The meta-narrative includes a cameo from the real Bennett, while the Olivier-winning actor Alex Jennings, who turned down the stage role in 1999, finally plays the dual Bennetts.

"None of us can quite remember – Maggie, or Alan, or me – why we didn't go ahead and do the film in 2000," Hytner said as we talked between screenings at the Toronto International Film Festival last September. "But it was when Alex played Alan in [the 2013 stage production] Untold Stories that it occurred to all of us that he's so good as Alan that we should think again about doing Lady in the Van – the film."

Jennings plays Bennett as prim, prickly and only thinly polite. "Alex and I also both know that Alan is a more astringent character than the popular cozy image of him might suggest," Hytner said, "and certainly I was always urging Alex to do full justice to how hard-edged Alan can be, even at the same time as he's being apparently passive."

However steely, though, Bennett's will was no match for the real-life Miss Shepherd. "What you respond to is her fierce independence, her determination not to be pushed around. By and large, old ladies are pushed around and made victims of in movies. And the thing that I think makes her likable is that the one thing she refuses to be at any point is a victim," the director said. "It's hard to think of a character in a movie that is more broken down, and whose life has come to less."

If each rendition of Bennett's tale emphasizes a different aspect of the story, the film more fully balances the character study's broadly comic material with empathy for Miss Shepherd. "The film allows her the space and material to do a lot more regret and waste, and of a life thrown away," Hytner said. "Which is all speculation. [The real] Miss Shepherd rarely gave Alan any sense of her inner life. And Maggie finds that."

Then there is the film's metafictional conceit. The medium convincingly renders the duality of twin Bennetts with Jennings in both roles – one sits at his writing desk, observing and narrating the proceedings, while the other bickers with this unseen version of himself (and with Miss Shepherd). "The film is scrupulous to draw your attention to departures from documented truth," Hytner said of the cinematic trick. "They argue about whether it's permissible to say certain things. Because she never said them."

Repeatedly, Bennett the author explains he wants the tale to be "a fair reflection of the facts," including what he had initially edited out, "although the only person to know how much I may have doctored her history is me."

"Telling the truth crops up quite a bit in the play, what Miss Shepherd did or didn't do a subject of some disagreement between 'the boys,' as I tended to think of the two Alan Bennetts," Bennett wrote in the 1999 Faber edition. "They call not telling the truth 'lying,' but 'the imagination' would be a kinder way of putting it, with Alan Bennett the writer finally winning through to make Miss Shepherd talk of her past (as she never actually did) and even to bring her back from the dead in order to take her bodily up to heaven (also imaginary). These departures from the facts were genuinely hard-won and took some coming to, causing me to reflect, not for the first time, that the biggest handicap for a writer is to have had a decent upbringing."

Film Review
The Lady in the Van: Maggie Smith shines in a sentimental adaptation
February 5, 2016 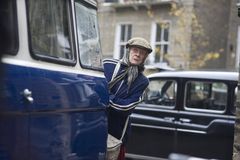