Donald Sutherland won't be seeing his new film, The Leisure Seeker. He sees very few of his films. His characters don't want him to.

"I can watch myself in the rushes, because that's part of a process," he said last September, in a hotel-room interview during the Toronto International Film Festival. "But the character is alive inside me." Even after the movie is finished, "he's not dead yet. So when the editor moves him around – when he's got his arm up by his ear or his hand in his rear end – it's not who he is. And he gets excited."

Wait, let me get this straight: Donald Sutherland, 82, veteran of more than 120 films and scores of television shows; Donald Sutherland, Canadian icon, father of an acting dynasty, possessor of the warmest blue eyes in the world; Donald Sutherland, whose voice sounds like the purr a cashmere sweater would make, if it could, while it wrapped itself around you – Donald Sutherland believes that there are characters inside him who don't like to see themselves being moved around by someone else?

"Yeah, yeah," he says, delighted to be communicating this. (He sounds delighted throughout our interview. He seems to live in a state of perpetual delight.) "I've seen Kelly's Heroes and The Dirty Dozen, and pieces of MASH. I keep promising myself I'll watch Klute. But when Bob Redford insisted I watch Ordinary People, I watched the first five minutes, at this great big premiere, then got on my hands and knees and crawled out, over the feet of the people in my row, until I got to the aisle, and then I raced out of the cinema."

Fascinating. No one has ever said this to me. "Oh, I said it to Helen the other day," Sutherland says, referring to Dame Helen Mirren, his co-star in The Leisure Seeker, "and she said, 'That's absolutely right. That's exactly how I feel.' So at least there are two of us."

I've interviewed Sutherland before. I always think I'm prepared for his Buddha smile, his mischievous twinkle and eccentric narrative zigzags, how he'll stop in the middle of one anecdote to tell you another, so a story about how he once watched a Chinese diplomat at the United Nations hold up his pinkie, ring and middle fingers to signify the number three – which he'd never seen before, and "It was so beautiful!" – suddenly becomes a story about how he once picked up a stick and drew female genitalia in the sand of his driveway in Malibu to teach one of his sons where the clitoris is. But he always takes me by surprise.

Thankfully, Sutherland's inability to watch himself doesn't inhibit him from loving what he does. Or celebrating it. He'll receive an honorary Oscar for lifetime achievement at this year's Academy Awards, an acknowledgment that many feel is long overdue. He, however, feels "nothing but the most liberating, shoulder-relaxing brilliance. It's the most generous, exquisite thing."

Why shoulder relaxing? "It's like a door opened and fresh air came in, and I took a deep breath and my shoulders relaxed," he replies. "My shoulders are always up around my ears."

The award was "a huge surprise," Sutherland continues. He and his wife of 46 years, Francine Racette, "were sitting on the little balcony of our hotel room, eating spaghetti marinara at dusk overlooking the roofs of Rome. I'd just finished shooting" – Trust, a television series due in March, which covers much of the same story as the current film All the Money in the World; Sutherland plays J. Paul Getty – and my telephone rang."

Sutherland didn't recognize the number. He gets a lot of robocalls, "where there's a little pause and then someone comes on and says, 'I have the most wonderful opportunity.' I always say, 'Hang on. Take my name off your list. Don't ever call me again.'" (Imagine being told off by Donald Sutherland's voice.)

But this call was from John Bailey, the cinematographer who'd shot Ordinary People, and who in August became president of the Academy of Motion Picture Arts & Sciences. "I hadn't heard from John in 30 years," Sutherland says, chuckling.

While Sutherland is savouring his lifetime achievements, his character in The Leisure Seeker, John Spencer, a beloved English professor, is rapidly losing his memory to Alzheimer's disease. His spunky wife, Ella (Mirren), takes him on one last road trip in their ancient family RV, and humour-spiked pathos ensues. Although Spencer endures some intimate humiliations, none of it was difficult for Sutherland to play or think about. He's frank about aging.

"There are a lot of disadvantages," he says. "But I like my grandchildren and my children. Those people I truly love. I am fascinated that my wife is still, after 46 years, patient with me, most of the time. I'm delighted I can still work."

To prepare for The Leisure Seeker, Sutherland listened to recordings and watched DVDs of caregivers and instructors for caregivers of people with Alzheimer's and dementia. "Because you can't get a lot of information from the patients themselves," he says. "My side was formed from the reverse of the caregivers' side. I inform my characters a lot. If they're well-enough informed, they can take me over. But if I think they're wrong, they can't."

He must have informed Spencer well, because while filming, Spencer took over and said many unscripted lines that Sutherland had not thought of. "But when they came out of his mouth, everyone was delighted, and I recognized they were true," he says. "That's my job, to get as close as I can to the truth of the human problem. And colour it out, and express it. Drama is the exposition of the central core of the human existence. Alexander Pope said, 'True wit is nature to advantage dressed/What oft was thought, but ne'er so well expressed.' That's what you strive for, to get something where people will say, 'Ah, damn, ah, yes,' or 'Ah, that's my mother.' "But very few people are able to think, 'Ah, that will be me one day,'" he goes on.

At this moment, his long-time publicist, Catherine Olim, enters the room to wrap things up, and he seamlessly directs his next sentence at her. "Although it was curious, Catherine, earlier today, I had my eyes closed when Eden was doing my makeup. I thought, 'That's how it will be when I'm a corpse.'"

"You won't know," Catherine says, then jokes: "But don't worry, we'll get Eden for you."

"How do you know I won't know?" Sutherland asks. "When you're in a coma you can hear people."

"You don't know for sure," Sutherland says sagely. "Because I did die. But that's a long story. A story for another day."

He stands, unfurling his long, Lincoln-like body. He embraces me formally. He exits, smiling.

The Leisure Seeker opens Jan. 26 in Toronto and Vancouver before expanding to other Canadian cities 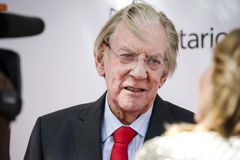 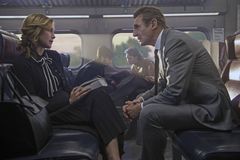 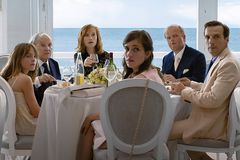