In the 1976 film Rocky, the fictional prize fighter Apollo Creed said "there ain't gonna be no rematch" and then said it again, to which Rocky Balboa replied, "Don't want one." So that was that? No, it was not. When it comes to film-world franchises, rematches are the rule. As Sean Connery's silver-screen spy once told us, never say never again.

And of course boxers are infamous for keeping on and coming back. "We always have to be in the middle of the action 'cause we're the warriors," Creed would later tell Rocky in Rocky IV. "And without some challenge, without some damn war to fight, then the warrior might as well be dead."

Creed, an Ali-like invention charismatically portrayed by former football player Carl Weathers, died in the ring in Rocky IV. Ain't gonna be no rematch, no way. But Wednesday marks the release of Creed, the seventh in the Sylvester Stallone-spawned series, but the first without "Rocky" in the title, and the first not written by its creator.

Stallone is a co-producer of Creed, and, as the long-retired Rocky, a co-star in the film. But while he directed four Rockys, Stallone did not yell "cut" for Creed, and the story is not Rocky's. Stallone and his loveable lug are no longer in the middle of the action – a good thing in the film world and the fight game where staying on too long is an issue.

Creed is so-titled because of the film's protagonist, the light-heavyweight boxer Adonis Johnson Creed, played by Michael B. Jordan from television's Friday Night Lights. The illegitimate son of a beloved, long-deceased world champion Apollo, the upstart Adonis has something to prove. "Every move that I make, every punch I throw, everybody's gonna compare me to him," Adonis says of the inevitable bloodline judgment. He travels from high-life Los Angeles to gritty Philadelphia to train with Rocky, a restaurant owner with his own big-odds battle to fight. So, a Rocky film, if not in name, then in spirit.

The original Rocky was released in the year of an American bicentennial that marked a star-spangled fight against an overdog 200 years earlier. The red-white-and-blue occasion was worked into the film's script. (Later, in 1812, the colonies won a rematch against Britain by a controversial split decision.)

The mid-seventies were the fighting years of Rocky and the born-to-run Bruce Springsteen, a rock balladeer who sang of highways jammed with broken heroes and last-chance power drives. We can see the Italian Stallion's up-punching fight as the fight of Stallone, a monosyllabic unknown writer-actor up against a major studio that wanted his script but not his acting. Stallone won the battle to star in his film – a "sentimental slum movie," in the words of a decidedly unmoved Vincent Canby of The New York Times, which won three Academy Awards.

An American classic, Rocky featured a colourful ensemble of characters: weird, just-surviving oddballs, including Rocky, a thumb-breaker for the Mob who was too kind-hearted for the job. The film was dark, with memorable scenes of ugly Thanksgiving dinners and heavy confrontations between Rocky and Burgess Meredith's gnarled guide Mickey Goldmill.

It was Mick who disdainfully suggested that Rocky retire, but then switched gears when hired as his trainer. "You're gonna eat lightning and you're gonna crap thunder," he growled to his charge. The diet, fortified by early-morning raw-egg gulping, was unconventional and probably unsanitary, but it worked.

The sequels stuck to the underdog formula and varied in quality: From the maudlin depths of 1979's Rocky II to the entertaining flash and circus of 1982's Rocky III; from the on-the-nose Cold War representation of 1985's Rocky IV to 2006's unmemorable Rocky Balboa.

The problem with the sequels has always been with Stallone, the actor. After the original film, his Rocky turned from performance to impersonation – sometimes a very poor one at that. By Rocky III, Stallone's prizefighter was no longer a pale, doughy everyman, but a chiselled rock star. By Rocky V, the champ is concussed and back living in the old run-down neighbourhood, but the rise-and-fall narrative wasn't as winning as the original Gonna Fly Now climb.

The sixth in the series, Rocky Balboa, was a so-so film that works best when comprehended as a finale. As in the 1976 original, Rocky loses the fight but is a winner in defeat. In an echo that completes an arc, he tells his deceased wife "Yo Adrian, we did it" one more time.

Now Balboa is back, but Creed has more of a spinoff feel than a straight sequel. It's probably a smart way for a studio to continue a franchise past its prime – a Rocky film, but not a Rocky film. As the agreeable Balboa told his entrepreneurial future brother-in-law Paulie in the first film, "If you can make money off my name, make it, okay?"

Film Review
Sylvester Stallone finally hands his gloves to the next generation in Creed
November 24, 2015 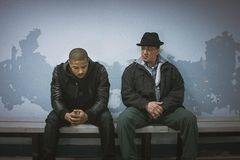 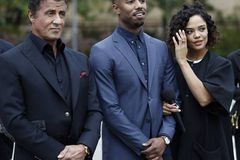 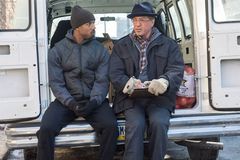