Seen unkindly, Ellen Page's entrance in the new Woody Allen film To Rome With Love turns her looks into a punchline. The way that Page handles this, both within the role and in discussing it, says a lot about who she is.

In the scene, an expat American couple, played by Greta Gerwig and Jesse Eisenberg, waits at the Rome airport for her friend Monica to arrive for a visit. Breathlessly, Gerwig describes to Eisenberg Monica's allure: She's brilliant and mysterious, men fall helplessly in love with her, she radiates sex. Then Gerwig says, "Oh, there she is!" and the camera moves to reveal – Ellen Page. A pretty girl, but not the knockout we expect. Her regular brown hair is pulled into a scruffy ponytail, she wears little makeup, her body – nice but not bodacious – is clad in a modest button-down shirt and jeans. The setup is calculated to make you think, "Her? This is the temptress?"

That had to be intimidating, I said to Page in a phone interview last week – to have to first embody the joke of Monica's physical ordinariness, and later live up to her racy reputation as a sexually charged pseudo-intellectual.

"Are you kidding me?" Page replied. "I thought the moment I stepped off the plane in Rome, I'd be recast." She usually feels insecure before beginning a role, and with this one, was even more so. But she and Allen had a conversation (brief, which is typical for him) in which he assured her that Monica "wasn't some sort of raging floozy, that there was something substantive here," she says, and she took it from there.

"Substantive" is one of Page's specialties. Born and raised in Halifax, she now lives in Los Angeles, where she was speaking to me, I think, from a car – at one point I heard the click-click of a turn signal. Her rapid-fire delivery combined with her bell-like voice and her indelible turn as a pregnant teen in Juno (the role that launched her in Hollywood and earned her an Oscar nomination) makes her sound like a precocious child. But at 25, she's already been acting for half her life, playing everything from an architecture student (Inception) to a roller derby star (Whip It) to an eco-terrorism sympathizer (The East, due later this year).

While Monica's vignette in To Rome With Love is as frothy as cappuccino foam, Page's take on her has heft. "I am really excited that I got to play this character, though I don't necessarily look like the person who might first pop into someone's mind for it," she says, "because the way in which 'a sexual woman' is usually portrayed is profoundly limited and profoundly narrow. I think sexuality, and what is sexual between two people, is more complicated than the kind of images that we're inundated with that make us all feel, women in particular, not good enough, not sexual enough."

Wait: Is Page daring to say that a woman doesn't have to look like a Barbie doll in order to be sexual in a mainstream movie? "I know, brave, right?" she replies, laughing. "I'm kind of shocked about what's happened to the feminist movement since the 1970s. Look at the young women who were in films then – Sissy Spacek in Badlands or Carrie, Jodie Foster in The Little Girl Who Lives Down the Lane or Taxi Driver. Or Diane Keaton. And it's like, what happened that we got this limited view of what a sexual female character needs to be? Or a female character in general, quite frankly." (Note: Page says "quite frankly" a lot. Frankness is another of her specialties.)

"It's kind of an obvious thing to say, but I think it comes down to making people feel bad about themselves, so they fill that up with consuming something," she continues. "It's not even just women any more – there are more and more images of men with chiselled abs and unrealistic bodies, too."

There certainly are at the multiplex this summer. In The Avengers, the Hulk and Captain America get more ripped with every incarnation. Andrew Garfield's Spider-Man physique is a lot more chiseled than Tobey Maguire's was. The frequently shirtless pot growers played by Aaron Johnson and Taylor Kitsch in Oliver Stone's Savages sure seem to have a lot of time to work out. And in Magic Mike, Steven Soderbergh's new male-stripper movie, each actor – Matthew McConaughey, Channing Tatum, Joe Manganiello – is more insanely cut and pumped than the next. Watching it, I got so distracted by totting up the gym hours spent on those poufy pecs and keyboard abs, not to mention whatever that band is across a man's hipbones, that I lost track of the plot. (Good thing there wasn't much of it. Though Magic Mike's reviews have been good, to me this emperor has no clothes. Which I guess is apt.)

Whether this new pressure on men is a sign of equality or a signpost of the apocalypse, Page doesn't know. She's just glad that her own life has settled back down after the "completely and utterly shocking whirlwind" that enveloped her in the wake of Juno's monster success. "I am so grateful for that film," she says. "It brought me to a place where I can make choices about what I want to do." She's still pinching herself that those choices include sitting in Rome with Alec Baldwin (whom she calls "a sweet, wonderful, present person") on the steps of the two-banger trailer they shared, sipping espresso and chatting between takes.

The characters Page gravitates toward tend to be, like Monica, "those that are easy for the audience to immediately have very significant judgment of," she says. "Because when you connect to a person like that, and – this may sound cheesy – go on some kind of a journey with them that allows you to delve into new worlds and new perspectives, I think it makes me be a less judgmental person. We live in a society so consumed with constant judgment of one another, when I think really we're all very, very similar.

"With Monica, for example," she continues, "who knows to what extent her behaviour is a manipulation, or simply how she exists – flowing from moment to moment without thought of responsibility and consequence – or if she actually experiences profound emptiness and insecurity? I think film can be a powerful tool for connection and empathy and compassion. That's not what every film has to do, by any means. But if a film like Philadelphia manages to change the perspectives of some people, or a film like Monster allows people to see society in a few more dimensions, that's a really, really beautiful thing." Beauty that's much more than skin-deep. 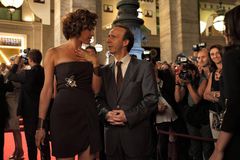