When writer-producer Marti Noxon, Gone Girl author Gillian Flynn and a studio executive met with a potential star for the upcoming TV adaptation of another Flynn novel, the actress was struck by something unusual.

" 'I don't think I've ever had a meeting with all women,' " Noxon recalled the primarily film actress commenting. "I said, 'Get used to it.'"

Behind-the-camera hiring both in film and TV is so statistically imbalanced that the American Civil Liberties Union last week called for an investigation into the industry's "systemic failure" to hire female directors.

However, while the percentage of big-screen directors has slipped, TV is displaying its potential for significant change. The contrast is due in part to studios' obsessions with costly action movies that are entrusted almost exclusively to veteran male directors.

It also stems from the unique and influential role of the TV showrunner, the person who steers writing and production on a series.

Formally titled executive producers, showrunners generally come from the ranks of screenwriters. Although women are underrepresented as TV writers – holding less than a third of cable and broadcast jobs, according to a Writers Guild of America study – the ones who rise to the top can pull other women along.

Noxon is proof of that. Her Bravo series, Girlfriends' Guide to Divorce, hired four female directors in its debut 2014-15 season.

"That is a conscious effort," she said. "But the great news is it's not difficult because they're supertalented."

The ACLU's request for a hiring probe by state and federal civil rights agencies coincided with last week's unveiling of freshman network series for 2015-16, a window into the current state of female hiring in TV.

New series with female showrunners include The Catch, created by Jennifer Schuur, and The Family from Jenna Bans, both on ABC; Crowded from Suzanne Martin, Hot & Bothered from Chrissy Pietrosh and Jessica Goldstein and Heartbreaker from Jill Gordon, all on NBC; and CBS' Code Black, with Noxon among its executive producers.

They join a field of returning shows topped by women that include Fresh off the Boat from Nahnatchka Khan and Secrets and Lies from Barbie Kligman, both on ABC.

The Catch is the fourth ABC series from partners Shonda Rhimes's and Betsy Beers's Shondaland, the production company behind the hit dramas Scandal, How to Get Away with Murder and Grey's Anatomy. The success is being paid forward.

"We are two women who run a company," Beers said. "We tend to hire a lot of women."

Schuur is among the beneficiaries. Although she's acquired an extensive list of TV writing and producing credits over the past decade on series including Army Wives, Big Love and Hannibal, working with Beers and Rhimes has been eye-opening.

They make it "absolutely an imperative to find voices that are not represented in the world. It's always a deliberate choice to look for women and women of colour and men of colour," Schuur said. The pilot episode of The Catch, for example, was directed by Julie Anne Robinson.

"It was one of the few times I've been on set with a female director," Schuur said. "It was great. She's a commanding presence and a little bit of a bulldog who fights for what she wants," the mark of an effective director.

For female directors, the battle begins with getting hired. A 2014 Directors Guild of America report found that women directed 14 per cent of the 3,500 TV and major online episodes produced in the 2012-13 season, a figure unchanged from the previous year.

But the gender division is far more lopsided in movies, according to the ACLU: Women represented 7 per cent of directors on the 250 top-grossing movies last year – two percentage points lower than in 1998, despite the fact that about half of film-school students now are women.

Beers, a film veteran before she made the move to TV around 2005, said she noticed the difference even then. "From the very beginning of walking into the TV world there was definitely more of a presence of women as executives," she said.

The TV picture should be brighter still for a medium whose viewership traditionally skews female.

At Shondaland, "we've created a world that we forget is not reflected" elsewhere in the industry, Beers said. "I've talked to writers who still work on shows that are primarily male-driven. It's an ongoing process to make sure that on all shows you get a range of voices." 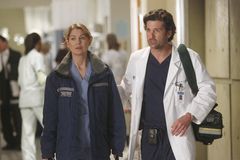