To meet for drinks with Brian Robertson and Pavan Moondi is to draw upon a vast reservoir of Toronto bar expertise. Choose a neighbourhood, and they'll rattle off a catalogue of places to be and places to be seen: Black Dice, Unlovable, Cherry Cola's, Cold Tea. The clubs and dives aren't merely social hot spots. They're sets, locations – places to film. Robertson and Moondi are like nightlife cartographers, and their new feature Diamond Tongues is like a map of Toronto cool. The familiar landmarks and touristic cliches that signify the city in other films shot here have been mercifully expunged. This is the real thing. Toronto has never been captured more authentically.

This was true on a more modest scale of their previous film, the slacker comedy Everyday Is Like Sunday, which Robertson produced and Moondi directed. This first leap into feature filmmaking followed years of work together as producers of The Seventh Art, an online magazine well respected locally for its long-form video interviews with artists and industry professionals. For those interviews, too, they avoid the typical conference rooms and hotel lobbies of red-carpet convention, preferring instead to stage chats in the city's taverns and taprooms.

I met the duo at Northwood café, a low-key patio on Bloor West – Moondi's recommendation. Joining us was Leah Fay Goldstein, who stars in Diamond Tongues as an aspiring actress named Edith – although Goldstein is something of a star already. In her capacity as frontwoman of July Talk, an indie rock band, Goldstein attracts the kinds of fans who mount galvanizing Twitter campaigns and style their hair to better resemble their idol. Her charisma is obvious on screen and on stage. In person, too, she radiates magnetism: One look at her and you want to know more.

Robertson and Moondi felt the same way when they first saw her – at a bar. It was a party in the middle of last year's Toronto International Film Festival, and July Talk was scheduled to perform. Moondi saw Goldstein waiting to go on stage and decided in a flash of beer-bolstered inspiration to seize the opportunity. He asked her to be in the film – but, this being a bar, what precisely happened remains a matter of some debate.

"Pavan swears that I just said yes and then walked on stage," she recalls.

"You did say yes, but I don't think you were serious about it," he says.

"I feel like I had the wherewithal to say, 'Get my e-mail and send me a script.'"

"No. No way. You said yes, you hugged me and immediately walked on stage."

"I guess if I had actually said yes, which I don't think happened – "

"Well, if it did, it didn't mean that I had to do it," Goldstein said, closing the argument.

Whatever the circumstances, Robertson and Moondi were simply relieved to have found, at last, an appropriate lead. "We were very close to not doing the movie at all because we couldn't find the right person," Robertson says. "So we were just over the moon to find Leah." And he credits this coup, naturally, with their bar-hopping prowess. "I don't think we could have walked up to a musician and asked them to be in a movie unless we were really drunk."

Luck is a factor in every film production, but for Diamond Tongues it was an animating force. Goldstein, for one thing, was on the road with her band constantly, leaving the production to be squeezed into a nine-day gap between the Juno Awards and the South by Southwest festival in Austin, Tex. Meanwhile, the production itself was in never-ending peril.

"Literally the day before filming was supposed to start," Moondi remembers, "we didn't know if we had the money to make it or not. It was complete chaos. I was talking to a lawyer in the middle of the night. I was on the phone at midnight begging for the movie to come together."

"You never told me any of that," Goldstein adds.

Nor did he need to. Moondi pieced the funding together from a number of independent producers, and ultimately sold the Canadian distribution rights to Mongrel Media. (The film is set to open theatrically in the United States through Factory 25 this fall.)

At this point, I have to ask about the most distinctive feature of Diamond Tongues. Midway through the film, as Edith continues dreaming the Canadian dream, she drifts off to sleep and has a real one: a five-minute fantasy appearance on George Stroumboulopoulos Tonight – shot for real on Strombo's old CBC show. How did that come about?

"Our producer had a connection to a producer on the show, so we just asked," Robertson says. "And because it was near the end of the show's run, George invited us out."

"They gave Leah the full guest treatment," Moondi says. "I remember being in the makeup room and I was so nervous. The show was actually filming."

"You were nervous?" Goldstein protests. "To be on the Strombo show – and not as myself. I told Pavan that George has been my hero since I was six years old and I've never met him before. But Pavan said, 'No, everything you say, you're either at his level or above him. You have to patronize him. Don't treat him as your idol. Treat him like you're doing him a favour for being on his show. Ask him if he wants to go for a drink after the show. Tell him you're sorry they cancelled the show.'"

Surely she didn't say that one. Goldstein winces. "I did." Strombo, fortunately, was in on the whole thing – he knew she was playing a character – but his crew wasn't. "They were furious. Nobody would even make eye contact with me afterward."

They cut the line, but as it stands the scene is delightful – a frisson of rare Canadiana. But how does it translate abroad?

"Nobody knows who Strombo is in America," Robertson concedes, nor are they likely to appreciate references to the likes of Just for Laughs Gags. But these elements are essential to the film's unabashedly Torontonian identity. At a recent screening in L.A., a friend who'd moved away from Toronto approached Robertson, saying the movie really brought her back. Was she nostalgic? Robertson laughs. "She said it reminded her why she moved away in the first place."

How a Toronto programmer is resurrecting neo-noir cinema of the eighties
August 6, 2015 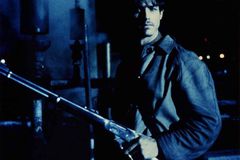 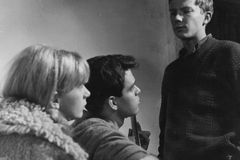