"What, you thought I was here for the capers?"

It is a rhetorical question. Ralph Fiennes, who in A Bigger Splash plays a boisterous record producer, is not on a ravishing Italian island for the edible buds. A sad soul beneath a raconteur's bluster, Fiennes's Harry Hawkes is there to reclaim the heart of Marianne Lane, an elegant rock star and former lover, played with a quiet sort of ferociousness by Tilda Swinton. He's also there to recoup the rock 'n' roll high life of his past. Mostly though? He's there for an emotional rescue.

Cue the Rolling Stones music in Luca Guadagnino's sumptuous thriller, a tensely sexual drama played out on the Mediterranean. It's quite the four-sided fandango. Swinton's Marianne is a Bowie-esque singer under strict orders not to speak, as she's on the mend from a surgery performed to help her regain her lost voice. Can she manage a silent orgasm? (Not to give it away, but let's just say that Meg Ryan will have what Marianne is having, thank you very much.)

Which brings us to Marianne's lover of six years, Paul, a documentary filmmaker and recovering alcoholic portrayed by the handsome Belgian Matthias Schoenaerts. We know he has a booze problem because the camera zooms in at a wine bottle and then quickly back to him, and because an order of four daiquiris is quickly amended to just tre.

Penelope clearly has designs on Paul. One wonders if her attraction to him is genuine, or if her father is pimping her out as part of his scheme to win back Marianne.

A Bigger Splash is Luca Guadagnino's follow-up to I Am Love, his gorgeously appointed 2009 film that also starred Swinton. This one opens with Swinton's glam-rock singer in a flashback scene, on stage at a stadium concert with an audience in her thrall. Then back to the present, which involves non-speaking Marianne and a deeply caring Paul doing nude sunbathing, having sex in the pool and jeep-riding on dusty roads to a lovely mud beach.

It's a real Eden, snakes and all. The elite, relaxed seclusion is broken up noisily and abruptly by the arrival of garrulous Harry and his temptress daughter. The scene shifts to something mildly bacchanalian.

Fiennes really shines here, with an electric-cocaine vigour and lust for life. He does an excellent dance to the Stones' Emotional Rescue, and he's not shy at all when it comes to nudity. Is he fit? For sure. The actor is 53 years old and F-i-e-n-n-e-s fine, let me tell you.

At one point, there's a line about the Rolling Stones' ruthless rise to power, and that founding member Brian Jones was the first casualty. Jones, you may know, died in a swimming pool misadventure. Keep that little tidbit tucked in your back pocket.

Inspired by the film La Piscine, script writer David Kajganich crafted a cleverly building story. Director Guadagnino uses an impending windstorm to achieve a sense of apprehension as back-stories and true intentions are revealed. And when the late-seventies Stones music isn't being used, the soundtrack switches to sweeps of Hitchcockian suspense.

It's all a bit mysterious. But while we're wonderfully kept guessing the whole film, the final scene seems a bit too unforeseeable. Nothing wacky, but things take a turn to slight farce, and it wasn't completely satisfying to this reviewer. To taste, though.

Last thing: You'll notice that everyone in the foursome wears sunglasses. We can see them as filters to the obviousness that the characters are desperately trying to avoid. Especially Harry – poor Harry. He thinks he's riding in as Marianne's saviour, but he's really just trying to salvage himself. Rock 'n' roll, then. Emotional rescue one day, damnation the next. 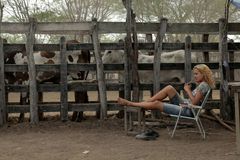 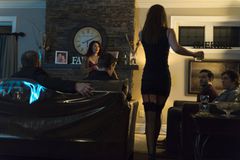 Film Review
Adaptation of Sunset Song over-wrought and under told
May 16, 2018 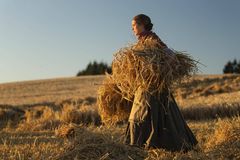