Jonathan Hayes's directorial feature debut, Algonquin, has parallels to Margaret Atwood's landmark CanLit novel Surfacing: a protagonist with daddy issues making an identity quest to the wild north. The difference is that Algonquin is a melancholic comedy about a depressive young man trying to get out from his overbearing father's shadow. In any case, it all feels very Canadian, in good and not-so-good ways.

Mark Rendall (Childstar, Victoria Day) stars as Jake, a nebbish, small-town schoolteacher with unrealized literary ambitions. His father, Leif, is a once-famous travel writer who's coming home for a rare visit. While Jake is left waiting at the bus station to meet his father, Leif has gone across the street to a restaurant, to drink beer and flirt with a young waitress.

Rather than apologize, Leif seems annoyed that Jake is annoyed. Leif (Nicholas Campbell, in a discomfiting performance), is a recognizable type of aging male celebrity: A swaggering dandy, with a red scarf like a jet of blood at his throat, who drops names and brags about his sexual conquests.

Jake's default response when his father speaks is a pinched grimace. What makes things worse is that Jake's mother, Rita (Sheila McCarthy), still carries a torch for the old rogue – despite his cigarette-and-beer breath, and history of infidelity and abandonment. She goes to bed with him on the first night. In the morning we see her systematically breaking dishes in a quiet rage. When Jake later says he doesn't understand the relationship, Rita responds that it's "not your relationship to understand," which is a nice line, if needlessly cryptic.

Why exactly has Leif blown into town? He has a new project: A book about Ontario's Algonquin Park, and he wants Jake to collaborate with him. Jake is dubious, but he agrees to drive his father to the old family cabin and help him get set up. Together they bond over dusting off dad's old jalopy and heading out on the road. Gradually, we see Jake softening (Rendall thaws well). The idea of sharing a book credit with his father has turned him from adversary to helper; suddenly, he's his daddy's boy again.

When we see a bottle of pills drop out of Leif's hand, we think we know where this is going. Surely Leif is a dying man, and the whole project is a way to bond with his son, in a redemptive gesture? The script doesn't take that route, which is a relief, though not entirely a success.

Instead, Algonquin goes off on a curious narrative tangent. Jake finds himself thrown in with Leif's beautiful, much younger lover, a Spanish woman named Carmen (Victoria Sanchez) who has an adolescent son, Iggy (Michael Levinson), a surrogate family. Amid the heavenly sunsets and sun-rippled waters, Jake heals old wounds, bonds with Iggy and learns what it's like to be a father and big brother.

Then comes another curious tangent – some broad comedy! Jake and Iggy are pestered by a persnickety park warden (Boyd Banks), who seems to have wandered in from a City Slickers sequel.

Tendency toward emotional ambivalence is another Canadian stereotype, which fits Algonquin. Hayes's desire to avoid the clichéd poignancy and life lessons offered by American indie films is refreshing until it begins to feel uncertain, and when it veers into comedy and then a final sour narrative twist, the film seems to paddle into the narrative cattails.

Kids on the big screen at TIFF: Grade 7 director will thank homeroom teacher at movie premiere
April 10, 2014
Film Review
Draft Day: A fumble off the field for Kevin Costner
April 11, 2014 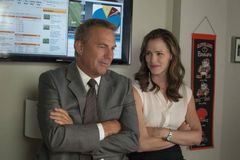 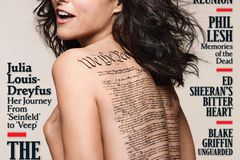