A man, a boat, the sea: That's all you get in All Is Lost, director J.C. Chandor's dialogue-free follow-up to his hyper-talkative 2011 Wall Street-crash drama Margin Call. His new film stars 76-year-old Robert Redford as an unnamed sailor (identified as "Our Man" in the closing credits), who is adrift and buffeted on the Indian Ocean after his sailboat is damaged.

The movie is rigorous, serious and well-crafted, with Redford holding the screen using only his economical emotional reactions and physical presence. Ultimately, your nautical mileage may vary as to whether Chandor and Redford achieve the philosophical and emotional impact they intend, but in a movie that is a demonstration of the importance of trying, they definitely try.

In the snippet of voice-over that opens the film, in which Redford's character apologizes to presumed unnamed loved ones for his failure, but also to cheer himself up: "I think you would all agree that I tried – to be true, to be strong, to be kind, to love, to be right …"

Our Man, we notice, speaks as if he were already making his case to St. Peter at the Pearly Gates, while, perhaps, a real man might remind his wife about the insurance-policy documents in the file cabinet, or tell his offspring to love their families. Not to worry. Chandor soon drenches us in credible detail. The man awakens in his sailboat with water sloshing around the cabin. When he clambers up to the deck, he discovers that his boat, a 39-footer called the Virginia Jean, is taking on water through a gash in the side of the hull.

The culprit is a rust-red, boxcar-sized container that has fallen off a cargo ship and collided with his boat. The writing on the box is Chinese and an opening reveals it's filled with sneakers, presumably being shipped to the West (perhaps a nod to the chaotic forces of global capitalism, which Chandor dealt with in Margin Call?). After separating the boat and the container, he labours to pump water out of the cabin and then uses a repair kit to patch the hole. But his electronic equipment is ruined. In making his repair, he shimmies up the mast, and then notices storm clouds on the horizon.

Things get much worse. Most of the first hour consists of Redford's character struggling to patch himself and his increasingly damaged boat, or doing more mundane things – eating, drinking some whisky in temporary celebration, shaving, trying to fix his radio. Eventually, the Virginia Jean gives up and Our Man finds himself bobbing in an emergency life raft, along with a sextant (and a basic book on how to use it), while he tries to guide himself north into the shipping lanes where he might be discovered. In brief hopeful moments he sees those passing ships, though they're too busy delivering goods to foreign ports to notice his desperate attempts to get their attention.

Chandor, using widescreen handheld cameras with little jitter, keeps things impressively direct and clear, and at close quarters. While viewers are free to draw their own conclusions to this story, and to its resonance with sea yarns from Ernest Hemingway to Life of Pi, the events sticks closely to the plausible and the ingeniously practical – how to get freshwater from condensation, for example. We're so adjusted to the sailor's point of view that a camera shot from below the raft, in shark-infested waters, initially feels intrusive. The danger of the circling sharks contrasts with beauty; the life raft on the surface is surrounded by a resplendent ring of sunlight, which marks a shift to quasi-religious imagery at the conclusion of the film.

All Is Lost, though relatively short, is not all gripping. Having seen it twice now, I found the same feeling on each viewing – that sequences on both the sailboat and the life raft feel repetitive, and that Chandor can be over-enamoured with what Henry James called "the solidity of specification." So that's how you get freshwater on a boat.

Where the film excels, though, is in its astute casting and the use of its star's persona. At Cannes, where All Is Lost showed out of competition in May, I joked that it should be called "The Old Mime and the Sea," for its Hemingway-like minimalism and use of a 76-year-old man on a boat. But the choice of Redford adds resonances to this narrative that another actor could not. Dustin Hoffman, for example, wouldn't work as well because All Is Lost is about keeping things bottled up and dry. Redford is in a line of handsome, somewhat wooden Hollywood actors (the list would include Gary Cooper and Gregory Peck) whose characteristic emotional restraint has come to symbolize modesty and integrity.

In his late career, Redford's work as an environmentalist, critic of right-wing politics and champion of independent cinema all add to his aura as an idealist. Yet entropy prevails, things fall apart: ships at sea, economic empires and handsome men's faces. In All Is Lost, the handsome hero of Butch Cassidy and the Sundance Kid and All the President's Men is an aged mask of his poster days. He frowns, and squints through glasses at the instructions for using a sextant or a fishing line. He also takes a physical beating and keeps emerging, sunburned, tousled but unbowed. The character's grace under pressure is the one truly fantastical element in this determinedly realistic film.

Not until several days after the accident at sea does Our Man lean back and scream the four-letter expletive that you might have expected the first time his sock-clad feet stepped into the pool of water on his cabin floor. No doubt, Our Man is a better man than most of us could ever be.

Robert Redford: The last of the Hollywood good guys
May 6, 2011 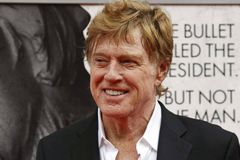 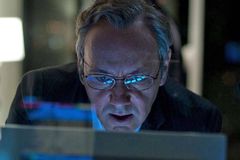 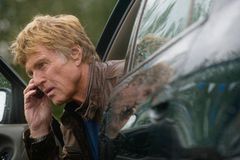 Paul Bettany gets down and dirty on Wall Street
November 11, 2011 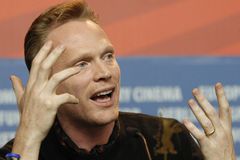