People tend to ask me why I don't "like" children's films; why reviews of The Peanuts Movie or the latest Pixar plop seem especially harsh or pointed or just plain mean. Fellow Globe contributor Stacey May Fowles even accused me of "hating joy." As much as I'd love to stake out some fresh terrain as being boldly anti-joy, I just don't think it's true.

If I'm especially harsh on kids' movies – as I'm about to be, again, in this review of the fourth entry in the live-action/computer-animated Alvin and the Chipmunks franchise – it's because I believe they serve an indoctrinating function. They teach their presumed child viewer how to see the world, and how to understand their place in it.

In this respect, themes or characterizations that may pass as forgivable (or just lazy) in movies made for adult viewers seem especially egregious and unforgivable. Movies aimed at the modern toddler-and-tot set should be held to a higher standard, not a lower one. After all, most adults are lost causes, and children, as the lady once sang, are the future.

So, yes, it strikes me as ridiculous, and also despairingly sad, that kids lose their minds at characters called Minions: pint-sized servant-creatures that seem designed to groom children for a future of formless corporate personhood. It also bothers me – actively annoys me, even – that Pixar movies fleece their viewers (child and parents alike) with tawdry schmaltz and hokey sentiment that passes for emotional sophistication.

When children's movies do work well, as in the way the How to Train Your Dragon films deal with real issues such as disability and environmental stewardship or the way the Wachowskis' formally radical Speed Racer movie gets as close to an anti-capitalist parable as a $120-million Hollywood film possibly can, they push back against the trashiness and flip indifference that more broadly define the medium.

It should come as a surprise to literally no one that Alvin and the Chipmunks: The Road Chip, a film that seems reverse-engineered from a title pun cooked up by a marketing exec at Fox desperate to pay down alimony debts, is no Speed Racer. It's a film that not only reflects that howling emptiness that is modern culture, but faithfully depicts it (Indeed, when the film's human actors engage with the computer-animated chipmunks, it's as if they're actually acting into a void.)

The film opens with a lavish house party sequence, in which rodent children Alvin, Simon and Theodore host a rager for their human "father" (Jason Lee). People dance to LMFAO's Redfoo's Juicy Wiggle, and make hashtag jokes, and ride skateboards off ramps into a suburban L.A. swimming pool.

From there, the confusion and calamity mount, as the chipmunks travel from Los Angeles to Miami to attempt to stop their dad from proposing to his girlfriend (Kimberly Williams-Paisley). At one point, three computer-generated chipmunks rap Sir Mix-A-Lot's Baby Got Back, a song about a gentleman achieving an erection at the sight of a woman's large posterior.

In another bit, an air marshal (Tony Hale) pursuing the chipmunks pries open a door and pulls a psychotic rictus grin, like Jack Nicholson in The Shining, to which a character confusingly responds, "Whoa! He's like the Terminator!"

John Waters, who earned his reputation as the maker of a movie in which drag queen Divine eats actual feces, has a cameo, for some reason. It's a mishmash of reference and pop-culture pandering, amounting to the shrill rattle of postmodern's putrefying corpse scraping frantically at the inside of its coffin.

Apart from a simple, but admittedly well-meaning, message that families come in all different forms and sizes, The Road Chip is hopeless. It valourizes the vacuity of pop stardom and fawning celebrity culture, and advances the idea that life is really nothing more than a discombobulating barrage of sound and sensation.

Does any of this "matter" to a child? I don't really know. So as far as considering how this film will appeal to the modern Minion-obsessed youth of today, I'll defer to the bright young critic sitting in front of me at the 10 a.m. advance showing of the movie, who, after watching hyperactive images bounce by him for about 40 minutes looked up at the movie screen and proclaimed, simply, elegantly, "Doo-doo!"

Star Wars: The Force Awakens is both a style departure and a welcome return
December 17, 2015 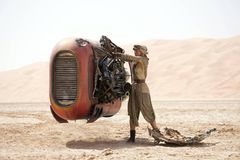 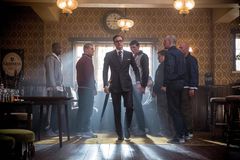