For his feature film debut, Brandon Cronenberg has taken the decidedly uneasy route in more ways than one. First of all, Antiviral is a virtual panoply of high wooziness, replete with sweating, shakes, vomiting, rot-infected food and more needles piercing skin than rush hour at a free flu clinic.

Second, the movie so blatantly summons the early work of the director's world-famous filmmaker father – David, I think his name is – that you're left both impressed and a little mystified by the younger Cronenberg's act of blatant paternal homage. Is it chutzpah or folly?

Both, it seems. Antiviral is the story of a rogue, celebrity-virus clinic technician (Syd, played by the unnervingly pale-skinned and glower-prone Caleb Landry Jones), who sells black-market variations on infections of the famous that are in demand in the TMZ-blighted future. The film combines the austere, snail's-pace tone of Cronenberg's two experimental student-era films (Stereo and Crimes of the Future, both of which featured Ron Mlodzik, an androgynous ringer for Jones), with elements of the viral conspiracy, flesh-invading thrillers stretching from Rabid to Dead Ringers. Syd is a self-infecting sick man selling smuggled celebrity sickness to a sick society, but realizes he has dosed himself fatally when the pirated virus of the mega-celeb Hannah Geist (Sarah Gadon, last seen opposite Robert Pattinson in Cronenberg senior's Cosmopolis) turns out to be deadly. He sets out on a hunt for the cure.

What the movie's got in spades is the chilly, polished porcelain vibe of vintage David Cronenberg, much of which unfolds in ominously named clinics where megalomaniacal scientists and doctors mess with people's organic makeup, and in the process unleash all manner of icky transformative blowback: Armpits spring deadly stingers, heads explode, bridges of flesh connect bodies.

In Antiviral, the prosthetics might be more sparingly deployed – although there is a very Davidian moment when our hero imagines that he has a bleeding metal grate where his mouth should be – but the situation and its unfolding is a virtual abbreviated amalgam of the senior Cronenberg's canon. The distinction is the 21st-century, celebrity-obsessed setting and neat viral riff on the digital piracy era, but otherwise Antiviral is itself a carrier of largely borrowed DNA.

In principle, there's nothing wrong with this: David Cronenberg's vision is one of the most accomplished and commandingly original in the movie world, and if you're going to cop (which everybody does anyway), you might as well cop the best. There are also enough traces of movie-making chops on display here to suggest Brandon Cronenberg has a career to come. But where Antiviral fails to rise above its so boldly evoked inspirations is in the dramatic execution and satirical edge of the other Cronenberg's work. For one thing, our increasingly infected hero is so off-puttingly monochromatic you may well root for the disease. For another, the very idea of celebrity culture as a form of especially virulent mass addiction is so self-evident as to verge on banal. Not untrue, just obvious and begging for further development.

It will, of course, be fascinating to see where the younger Cronenberg's cinematic inspiration leads him next. Now that he has so thoroughly explored his father's house, one wishes him success at finding a place of his own. 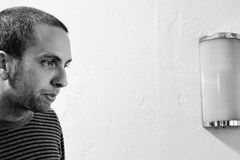