Very much a creature of the summer blockbuster in recent years, Iron Man director Jon Favreau has scaled down his banter-driven superheroics this time around for Chef, a low-budget indie film about a chef who himself goes indie. Rather than stay in his stifling, conventional kitchen, he quits in a huff and takes to the road with his pals and estranged son in a souped-up, hipped-out food truck.

While this recipe of blood, sweat and schmaltz occasionally wobbles, Chef is compelling, somewhat convincing and, according to many who know better than I, it's largely on trend.

Neither a food nor film critic, I outsourced much of the analysis to three of Toronto's best-known chefs, whom I invited to a screening and follow-up dinner at Big Crow, where my brother-in-law, Anthony Rose, is chef and co-owner. The trio may not have groaned and salivated at the food close-ups as many in the audience did, but they admired the film's authenticity. For the most part.

"It's probably as realistic as it gets," said Cory Vitiello, executive chef at the Harbord Room and THR & Co., who was digging into a slab of Big Crow's sloppy, gooey garlic bread.

"It's all on trend: cooking what you want. The modern Mexican thing. Pride in going to the farmers' markets and hitting the vegetables," chimed Jesse Grasso, head chef at the Black Hoof and Rhum Corner. "And radishes."

"A lot of carrot tops didn't make it to the food," said Vitiello.

Much has been made about the method acting of Favreau, who also plays the film's protagonist, Carl Casper. To learn the part of this hot-headed, neurotic workaholic, Favreau worked on kitchen lines in Los Angeles and, for that extra texture of authenticity, enlisted L.A. food-truck impresario Roy Choi as a co-producer.

The group thought Favreau pulled it off. Taking a stab at a plate full of barbecued wurst and apricot jam, Rose said Favreau certainly looked the part: the hipster beard, pallor and swaths of tattoos on his body.

Rose then shot Grasso a look. "Why are you staring at me?" the bearded, pale and tattooed Grasso asked.

The panel found Casper's friction with the restaurant's owner, Riva, the snivelling food Philistine played by Dustin Hoffman, particularly cathartic. After all, owner-chef tension is a perennial kitchen staple. The group had lived through or seen many similar battles. On the night the dreaded food blogger, Ramsey Michel, darkens their doorstep, Chef Casper wants to present his own menu, but Riva wants him to take the safe route, capped off with molten lava chocolate cake, which to this film is what merlot is to the film Sideways. No self-respecting cook would let this prosaic disaster-in-the making out of his kitchen, but Carl Casper does, thus beginning his feud with his nemesis critic.

The three chefs took particular relish in the struggle between the chef and Michel, whom Oliver Platt plays with note-perfect subtle, sweaty pomposity. (In another layer of realism, Platt's brother, Adam, is New York magazine's food critic.) In one particularly personal gibe, the critic takes aim at the chef's girth, saying that he was probably eating all the food his diners sent back.

That kind of attention to personal detail is a peeve among chefs. "Reviewers come after bloggers, so to make their reviews stand out, reviewers have to be even more mean and personal," said Vitiello, carving out some barbecued tuna with smoked-tomato-and-olive sauce.

The film's allusion to online haters also rang true to him. "Who wants to read another positive review? A poor review has much more traction."

The molten-cake moment eventually leads to Chef Casper's own meltdown in front of the critic, in which he issues all sorts of profane explanations about how the dessert is made. After clips of the blow-up go viral, he slinks off to Miami, where he begs his ex-wife's ex-husband, played by Robert Downey Jr., for help and winds up with a pungent, infested food truck that's more like a biology project than a potential vehicle for success.

Yet social media winds up being the engine of his food truck's success. His son, Percy (Emjay Anthony), with whom he predictably has trouble connecting, is a Twitter and Instagram guru. As they park curbside in cities that line up between Miami and L.A., they become a tweetable sensation.

While I found the cheerful chirping of Twitter something close to branded content, it was music to the chefs' ears. Chatter, after all, is their business. "I'll check my Twitter account 20 or 30 times a day," said Grasso. "Any time I have a second, I'll look at it."

Another issue I raised is the protagonist's love interests. The three didn't buy Chef Casper's relationship with his wealthy ex-wife Inez (Modern Family's Sofia Vergara), who lives in a palatial L.A. house. She seemed way out of his league. Yet the laws of restaurant dynamics dictate that even though he may be a has-been paleface, Chef Casper could have easily seduced the fetching hostess, depicted by a black-haired Scarlett Johansson. "You got single people spending 90 per cent of their time working together. For sure he's going to be [having vigorous intimate relations with] her," said Vitiello.

Each chef, however, connected with their own moments. Vitiello enjoyed the tension of whether a chef should respond to tweets or not. Grasso enthused about the soundtrack, and in particular liked a scene in which Favreau and his sous-chef (John Leguizamo) sing an off-key version of Sexual Healing in front of a nonplussed Percy. "That's a kitchen moment: When something's only funny to you and the crew."

For Rose, a single father of a little boy who works long hours, it was seeing something like his own life onscreen.

Drinks done, desserts clawed at and picked through, we called it a night. Rose left his restaurant and went home. The other two chefs said they also were going to go home – but first they wanted to pop into work.

Film Review
Edge of Tomorrow and The Immigrant: Double feature from the edges of Hollywood
June 6, 2014 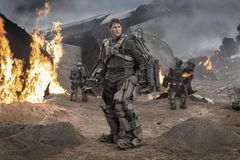 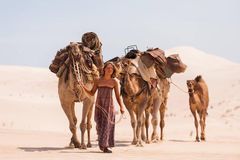 Film Review
The Fault in Our Stars: a full-throttle, by-the-numbers tearjerker
June 6, 2014 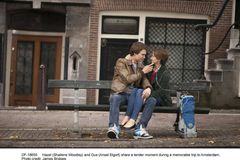 Film Review
The Animal Project: Not a failed project, but flawed
June 6, 2014 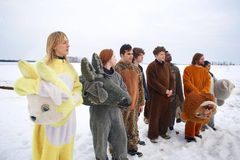 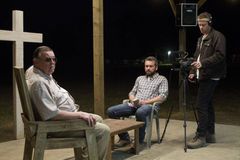 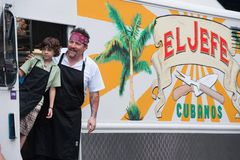