Shot in Louisiana, with non-professional actors and apparently set-designed from a junkyard, Beasts of the Southern Wild marks one of the most auspicious American directorial debuts in years.

Director Benh Zeitlin's film, which has echoes of Terrence Malick's The Tree of Life, is at once folksy and apocalyptic, as it follows a six-year-old heroine in a delta shack, facing the possible end of the world. The winner of major awards at Cannes and Sundance, Beasts (loosely based on a play by co-writer Lucy Alibar) is less a drama than a fable. The title, previously used for a Doris Betts short story, derives from William Blake's 1789 poem, The Little Black Boy, appropriately from his Songs of Innocence poem cycle.

The narrator is a precocious African-American girl named Hushpuppy (the marvellous Quvenzhané Wallis), with a stick-figure body and an expressive face beneath a puff of gold-tinted hair. She lives in a couple of tied-together trailers with her terminally ill, alcoholic father Wink (Dwight Henry) on an island named Bathtub, downstream from a levee protecting an industrial park.

The multiracial inhabitants of Bathtub live in communal, if not always harmonious, squalor. Wink sometimes strikes his daughter, though verbally, at least, she gives as good as she gets ("…when you die I'll go to your grave and eat a birthday cake by myself"). For all his parenting lapses, Wink is struggling to raise his child with enough grit and survival skills to manage without him.

Hushpuppy cooks her own food, tends the dogs, fowl and a hog, all of whom, she assures us, can talk to her. She also holds conversations with her absent mother who "swam away" some years before.

The initial end-of-days warnings come not from signs in the sky or the babbling of prophets, but from Hushpuppy's first-grade school teacher, who may be mentally ill. The teacher warns of global warming, floods and the arrival of carniverous wild creatures called aurochs.

"The river's gonna rise and there ain't gonna be no Bathtub," predicts the teacher, "Just a whole bunch of water."

When a hurricane strikes, the residents of Bathtub refuse to evacuate their homes as they're told to. Instead, they have a party with seafood, drink, music and fireworks. After the devastating storm, Wink and Hushpuppy find themselves floating atop the flood waters on a boat made from a truck chassis on oil barrels.

As postapocalyptic fables go, Beasts has an unexpected benignity. When Hushpuppy is left to fend for herself, she and some other children end up on a floating bordello for oil workers called the Floating Catfish Shack, where she meets a woman who may or may not be her mother and they calmly dance to a Fats Waller song.

At another point, Hushpuppy is visited by the promised giant aurochs, portrayed here by huge boar-like creatures who seem to have stepped off the pages of a Maurice Sendak storybook. Consistent with the child's-eye perspective of the film, the animals look nothing like actual aurochs (the extinct ancestors of modern cattle) but like giant CGI-created feral hogs who have run free in the woods and now stand, looking slightly embarrassed, before the tiny human.

So what's behind Beasts of the Southern Wild? To paraphrase Archibald MacLeish's famous line about poems, Beasts is less about meaning than being, an experience not an argument. While various environmental and political agendas might be discerned in the tale, none is emphatically obvious.

The salient item on director Zeitlin's résumé is that his parents are professional folklorists. He has made his film with a collective of New Yorker artists called Court 13, who transplanted themselves to New Orleans, post-Katrina. They bring an intense, artisanal approach to every frame of the film, from the hand-held cinematography to zydeco-flavoured music, and the entire film has the patina of a gorgeously rusted artifact.

As a kind of deliberate outsider art, Beasts is immune to reasonable but overliteral criticisms. Yes, the wise, poor child is a precious conceit ("We's what the earth is for," declares Hushpuppy). Yes, there's the awkward business of Northern white filmmakers risking ethnocentric condescension in portraying an uneducated, poor Southern black family. And, no doubt, the tiny, feisty Wallis (who reportedly won the role over more than 4,000 other candidates) is so adorable she makes the film seem less bleak than it is.

As an allegory of marginal people's resilience, Beasts of the Southern Wild uncompromisingly celebrates the strange. As a piece of filmmaking, it remains so satisfyingly bizarre, it makes its detractors seem imaginatively stunted while leaving even its admirers guessing. 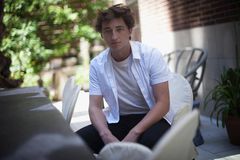