Woody Allen's first Stateside production in nearly a decade is a sharply observed, post-economic crash comedy-drama that boasts a formidable performance by Cate Blanchett and addresses such pertinent real-world concerns as class, gender and corporate criminality in urban America. Wow: how many surprises can a single sentence contain?

When we first meet Jasmine, she's on a plane bound for San Francisco. Installed firmly in first class, she's in full vodka-fuelled, me-first babble mode – her customary state, as we'll soon learn – and she's unloading a bottomless verbal suitcase of personal baggage on the poor woman in the seat beside her. Pray for whomever she's on her way to see.

That would be Ginger (Sally Hawkins), Jasmine's working-class, adopted sister, now separated from her contractor husband, (Andrew Dice Clay), and someone Jasmine hasn't bothered to contact in years. But now the circumstances are dire: Jasmine's own husband, Hal (Alec Baldwin), has met an ugly end in jail after being convicted of a Madoff-like binge of financial fraud, and Jasmine – despite that first class ticket from New York – is now effectively broke, alone and homeless. That Hal also bilked Ginger and her ex out of everything they owned only makes the new domestic circumstances that much more strained, though not as much as the fact that Jasmine is a patronizing, neurotic, alcoholic narcissist in deepest denial. For most of the movie, she's seen with her perfect nose poised just above the rim of a Stoli martini, trying to talk herself into another reality. It ain't working.

While Blue Jasmine wouldn't be mistaken for anything other than a Woody Allen movie – it's got the classical medium-shot compositions, the deliberate line readings, the endless babble in apartments, restaurants and city streets – it's the least Woody Allenish Allen movie in 20 years. It's been a long time (since Hannah and Her Sisters) since the writer-director took such sympathetic care with a fully fleshed-out female character, and it may be the most socio-economically attuned movie he's ever made. While the depiction of both the high and low ends of male behaviour may verge on clichéd – if you think Andrew Dice Clay is a thick slab of slob, wait until you meet Ginger's new boyfriend Chili (Bobby Cannavale) – it works because this is ultimately about what happens when women are sprung, voluntarily or otherwise, from those roles proscribed for them in conventional male-female relationships.

Smartly structured so that we see precisely how smugly insulated and privileged Jasmine's life with Hal was, the movie functions primarily as a study of a woman who's unravelling right in front of us. And this is where Blanchett, so rarely used to full effect, is nothing short of remarkable: as a woman who has never strayed more than a block or two from Park Avenue, who was oblivious to both her husband's business and extra-marital affairs, and who can only face her new, stripped-down circumstances lubricated by vodka and putting as much distance between reality and herself as possible, Blanchett provides the most fulsomely realized character Allen has installed on screen in his entire career. Just how, precisely, does an actor retreat behind their eyes in quite this way? That's what Blanchett does: Jasmine's flashbacks are invariably linked to those incidents that, in retrospect, portend just how false and fragile her entire existence was, and she retreats from each with yet another jolting belt of Stoli. Until the next assault from the truth arrives.

Whether collapsing in despair at the mere suggestion of taking on a "menial" job, lecturing her sister on her propensity for men that are "losers" – unlike, presumably, the winning, high-finance crook that was Hal – or lying with singular recklessness to the Washington diplomat (Peter Sarsgaard) with whom she strikes up an affair after he namechecks all her designer accessories, Jasmine is a Blanche DuBois figure for the 1 per cent era, and her tragedy – for that's what this is, right up to the end – is that she's got no idea how to function when she's bumped down to life with the other 99. The insufferable thing about so many latter-day Allen movies was the sense of hermetic removal from anything resembling a real world they conveyed. In Blue Jasmine, he takes this, cracks it open and frankly observes what happens when a Woody Allen character gets loose in something approaching a facsimile of reality.

Along with race, class is the other issue that is most conveniently and conspicuously denied in American life, and one of the things Blue Jasmine takes as its subject are the consequences of this denial. Sprung from the plush bubble of privilege, where Hal could maintain his wife's contented obliviousness with a regular supply of booze and bright baubles, Jasmine is so utterly unequipped to live in the world, she's like a captive zoo animal set disastrously free in the wilderness. By the time we reach the end, as bleak a conclusion as even Allen has ever dared, Jasmine's once again sitting beside someone who'd rather she just shut up. Only this time we know she never will – she can't – and it's a far cry from a park bench to first class.

Film Review
Only adults with ‘Smurf-holm syndrome’ could love this film
July 31, 2013 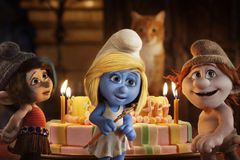 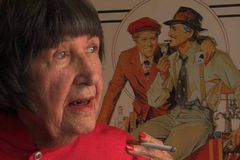