Nobody will believe me when I say this, but nevertheless: There's no particular thrill in trashing something that's bad. The image of the Critic is often one of some snivelling wannabe, contemptuous of the dreamers and creatives who actually take the risk of making things. And so he dips his quill in toxic ink and pens poison jeremiads to this debased culture, in the half-hearted hope that his animus will roust him just enough that he can make spiteful love to his tormented wife.

Well, it's not true.

Sure, there may be some kick in taking down a sacred cow. And there's a valid – even noble – critical function in scraping against the tides of public opinion, even if it's just for the sake of it. But reporting on a film (or album, or book) that is just workaday, run-of-the-mill awful is about as pleasant as choking down a lousily made hamburger. And that's the kind of bad CHIPS is. It's not uniquely bad, nor so bad it's good. It's factually, quantifiably bad. Overcooked, underdressed, sloppy, indigestible: just your classic crap hamburger of a movie.

Given the success of 2012's 21 Jump Street (and its 2014 sequel), the on-paper prospect of another resurrected eighties action-comedy franchise doesn't seem as dire as it might have five or 10 years ago. With their effortless buddy-cop repartee of their stars, their sufficiently high-octane action set pieces and their requisite meta-winking at their own pointlessness, the Jump Street films offer a model for other nostalgia-baiting revivals. Andrei Rublev it ain't. But 21 Jump Street was engaged with the patent silliness of its very existence in a way that seemed refreshingly self-loathing. It was also funny. And that's not nothing.

So, sure, lay an onion skin over the Jump Street formula, trace out a script based on the late seventies/early eighties NBC cop drama CHiPS, about two mismatched California Highway Patrol officers who pursue bad guys across L.A.'s warrens of highways on their police bikes. Would that it were so simple.

Written, directed and starring Dax Shepard, in some would-be Wellesian feat or totalizing film authorship, CHIPS feels as if it were three or four films smashed together and piled up on the open freeway of the imagination. (More convincingly Wellesian is Vincent D'Onofrio's crooked-cop villain, who howls, "I'm law!" like Orson Welles's corpulent police captain in Touch of Evil.) Shepard appears as motorcycle-daredevil-turned-highway-cop Jon Baker, who's partnered up with undercover federal agent Frank (Ponch) Poncherello (Michael Pena), who infiltrates the California Highway Patrol while investigating a string of armoured-car heists in the Los Angeles area.

CHIPS is a mess of buddy-cop clichés, jumbled plotting and harried motorcycle chases bogged down by hyperactive cross-cutting and crummy cinematography. Shepard and Pena share zero comic chemistry. A scene where the two bicker about whether or not analingus is a "standard" sexual act strains toward the breezy bromantic badinage of Judd Apatow (or the Jump Street movies) like a sad little sapling desperately stretching toward sunlight. Subplots about Baker's opiate addiction, and Ponch's compulsive sexuality, are introduced only to be left suspended in mid-air. During a climactic chase scene, night falls seemingly out of nowhere, as if time itself can't be bothered to keep pace with the slapdash jumble that is CHIPS.

Most curiously, CHIPS has little in the way of shrugging, self-referential meta-humour, save for a late-film cameo from the original Ponch, Erik Estrada, which predictably had preview audiences cooing with the sheer thrill of recognition. Were CHIPS altogether less miserable, its relative earnestness may scan as bracing. But it doesn't. A film this bad should at least possess the good grace to make fun of itself. 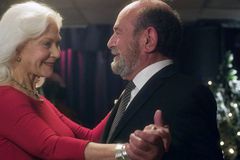 Review
Wilson: A less-than-heartwarming family reunion film
March 24, 2017
Follow us on Twitter @globeandmail Opens in a new window
Report an error Editorial code of conduct
Due to technical reasons, we have temporarily removed commenting from our articles. We hope to have this fixed soon. Thank you for your patience. If you are looking to give feedback on our new site, please send it along to feedback@globeandmail.com. If you want to write a letter to the editor, please forward to letters@globeandmail.com.
Comments