John Cusack and Adrien Brody's careers are so random these days that it wouldn't be surprising to find them popping up on local public access news shows, televised city council debates or reruns of cop procedural shows that were cancelled before their births. These days, just about the only place you don't expect to find these formerly respected actors is in lead roles in critically acclaimed hit movies.

So while it's a little strange to see Academy Award winner Brody, and Cusack – who in Say Anything icon Lloyd Dobler once effortlessly inhabited the career-making role of a man every man wanted to be, and every woman also wanted her boyfriend to be – show up in a Hong Kong-made historical epic starring Jackie Chan, it's nowhere near as jarring as it would have been when both men had thriving careers.

Truth be told, even Chan seems a little out of place here. His career has been defined by an intense physicality, but as he's gotten older he's slowed down, and here he's a coach as much as a player, calling the shots and watching supportively from the sidelines.

Chan is eternally boyish, but these days he's less a man-child than an old-man-child who does a classic spit-take early on, but otherwise occupies an uncharacteristically serious role as a man with a sacred duty to protect the Silk Road connecting China and the West around 48 BC.

A delightfully miscast Cusack stars as Lucius, a kind-hearted Roman general who, judging from his accent and manner, apparently hails from the little-known part of the ancient Roman empire that borders the contemporary Chicago suburbs. Cusack doesn't even attempt to do an "international" accent (which in this case would mean British, the default accent for Europeans), instead speaking in the tones of a country that would not be "discovered" by Columbus for another millennium and a half.

As Lucius, Cusack has a hangdog world-weariness and air of utter exhaustion that seems more attributable to Cusack's own career woes than his character's angst.

Before bonding over their shared love of peace and desire to see races co-exist in perfect harmony, Chan and Cusack's characters at one point square off in what feels like a deleted scene from a time-travelling sequence in an Expendables movie.

Chan and Cusack join forces to take on a brutal tyrant played with wild-eyed, scenery-devouring intensity by Brody, who seems to be channelling the demonic hamminess of international hams such as Oliver Reed or Klaus Kinski, in a performance that stops just short of having Brody drink lustily from the neck of a baby to convey his damnable villainy.

Cusack barely tries as a Roman general who ends up suffering the torments of Christ en route to martyrdom while Brody tries way too hard and Chan splits the difference in a more straight-faced version of the uncomplicated hero he has played in seemingly all his movies. Writer-director Daniel Lee gives the story an epic scope, but the film is hampered by the bloat and inveterate cheesiness that characterizes so many international co-productions.

The novelty of Dragon Blade comes from its mash-up of the rarely combined martial arts and sword and sandals genres. Behind the scenes and in front of them, Dragon Blade is all about a clash not just between countries or tribes but between worlds.

On paper, and in pitch meeting, at least, Dragon Blade might seem like a cross between Gladiator and Hero, but the combining of these competing and well-wrought subgenres leads not to exhilarating friction but a muddy, forgettable blur that does justice to neither the martial arts nor ancient Roman warfare side of the equation. In Dragon Blade, East meets West in a murky, mediocre muddle.

It's tempting to write that the leads deserve better, which was true at one point, but is clearly no longer. It would be better for Brody and Cusack if a project like this was an outlier. Instead, it reflects exactly where both men's careers are at the moment – in ways that are depressing for the actors and their fans alike. 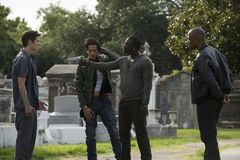 Hollywood aims for awareness in slew of summer films on mental illness
May 15, 2018 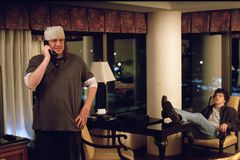