The movie Dumb and Dumber To is as much a tribute as a sequel to 1994's Dumb and Dumber, the first movie from Peter and Bobby Farrelly, and a whole endearingly stupid comedy genre. True to the original, the plot (credited to six writers) is sketch-on-a-napkin thin, the physical comedy is much better than the malaprop-stuffed dialogue. And over all, the movie is just funny enough to make you wish it were much better than it is.

The differences are that the stars are older – Jim Carrey's 52 and Jeff Daniels is 59 – and seem less youthfully irrepressible than middle-aged persistent, and the supporting performances are more cartoonish than in the earlier comedy.

The movie's dare-you-to-laugh tone is set before the opening credits when a disheveled Harry (Daniels) visits his old buddy, Lloyd (Carrey), in a nursing home where he has been for 20 years in a catatonic state and now resembles late-stage Howard Hughes. It turns out  Lloyd's just been playing a really extended prank, and after they have a good laugh, Harry enlists a couple of gardeners to help yank and yank and yank out Lloyd's catheter.

Back in the crappy Provincetown apartment (from the first movie) with the Bo Derek poster on the wall, Harry now lives with a meth cooker and a cat named Butthole, but life isn't perfect. He needs a new kidney, and an old girlfriend has informed him she's pregnant – though the postmark on the letter is more than 20 years old. Lloyd's old girlfriend, funeral home director Fraida (Kathleen Turner), tells them that years ago she had a daughter, Penny, that she gave up for adoption. Fraida shows them a picture of the adult Penny (Rachel Melvin) and Lloyd promptly falls in lust with her. For Harry, she represents a chance at a "genital donor match" for a new kidney. They head off on their quest in a borrowed hearse.

You might recall how Lloyd and Harry got entangled in a criminal plot in the first movie. There's another one here. Penny's adoptive parents are a wealthy but ailing scientist (Steve Tom) and his wife (Laurie Holden), who schemes with her gardener boyfriend, Travis (Rob Riggle, who does double duty as Travis's twin brother). Penny, who is dumb on a Lloyd/Harry level but cuter, has gone to El Paso to accept an award on her father's behalf, but has left an important parcel behind.

Soon Lloyd, Harry and Travis head to El Paso to deliver the mysterious package to the conference and catch up with Penny. Much flatulence and some violence ensues, and the movie's final third is spent at a brainiac convention, clearly modelled on the TED talks, where Harry and Lloyd do crude things around refined people to diminishing laugh returns, though the multicultural trio of Canadian hoser geniuses in Maple Leaf regalia is a pleasant sop to Carrey's home-country fans.

Dumb and Dumber To is an infectious movie in that you feel stupider just by watching it. Confusions arise: Which character, for example, is Dumb and which is Dumber? Harry is clumsy and loud but less of a risk-taker and thus, less of a failure. Lloyd is manic and romantic and has ideas that are usually terrible. So he's dumber, but in a way we all want to be.

Somewhat more troubling is the question posed by a confused homonym in the title that ends up as a dangling preposition: Dumb and Dumber To where? There's a new meanness in Dumb and Dumber To – nasty jokes about elderly Asians' accents, insults about Kathleen Turner's weight and a scene where Lloyd and Harry yell sexist taunts at a female lecturer – which is unpleasant, a kind of postmillennial snark that's a bad fit. With six writers churning out the jokes, perhaps someone forgot this is supposed to be a movie about loveable losers, not loudmouth louts.

Editor's note: The original version of this story did not correctly refer to characters Harry and Lloyd. This version has been corrected. Film Review
The Better Angels: A dreamy study of the boy that would be Lincoln
May 12, 2018 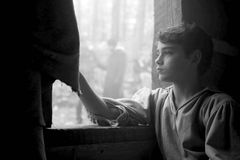 Film Review
Keep on Keepin’ On: A soulful story of bebop benevolence
May 12, 2018 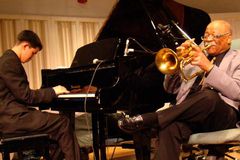