Aside from Jones's broadly entertaining performance as the egotistical Supreme Commander, the movie, directed by Peter Webber (The Girl with the Pearl Earring), is a dud. Adapted from the book His Majesty's Salvation by Shiro Okamoto, the film places MacArthur as a background character, focusing instead on his subordinate officer, the real-life General Bonner Fellers (Matthew Fox). Given a brief window of 10 days to assess Emperor Hirohito's culpability in Japan's war crimes, Fellers in an entirely fictional subplot also tries to determine the fate of a Japanese woman he once loved.

All this is in the service of a rather clumsy message about cultural relativism that preaches tolerance while delivering stereotypes. When Fellers isn't ruminating in voice-over about cultural Japanese-American differences, he interviews leading figures of the defeated Japanese regime, who repeatedly inform him that Japan is a nation of contradictions, that things aren't black and white and that, beneath its modern surface, this is an ancient culture of honour, obedience and sacrifice. Former prime minister Fumimaro Konoe (Masatoshi Nakamura) asks why Japan should be singled out when European powers had been engaging in imperial pillaging for centuries.

The romance subplot exists mostly in flashbacks, in which Fellers recalls his relationship with the beautiful Aya (Eriko Hatsune, from Norwegian Wood), with whom he had a relationship before the war. Having originally met her when she was an exchange student in the United States, Fellers later looks her up in the 1930s, while he's stationed in the Philippines, and attempts to rekindle the relationship. Though Aya describes herself as "outspoken" for a Japanese woman, there's little evidence of it in the repeated scenes of swoony gazes and mournful farewells. Other scenes involve Fellers, who is writing a report, interviewing Aya's uncle (Toshiyuki Nishida), a military general formerly at the Japanese embassy in Washington, who offers the familiar line about Japanese sacrifice and honour.

Later, in 1945, between interviews about Hirohito, Fellers keeps trying to find out what happened to Aya, along with his Japanese driver (Masayoshi Haneda). Aya becomes a stand-in for the ideas of sacrifice and honour, also defined by the Emperor. Though arguably well-intended, this kind of ethnic condescension feels jarringly misplaced, given the Imperial Army's record of mass atrocities through the 1930s and 1940s, though only the attack on Pearl Harbor is mentioned here.

As played by Fox, Fellers comes across as a none-too-bright subaltern who's willing to settle for a "we'll never know" answer to satisfy both his conscience and MacArthur's demand for a speedy solution to his emperor problem.

Opening with newsreel footage of the Enola Gay dropping the first atom bomb on Hiroshima, and with brief computer-generated scenes of the aftermath of the unprecedented devastation of bombing raids on Tokyo, Emperor tries to suggest the mass scale of Japan's postwar ruin. Too often though, the use of voice-over and repeated interviews in offices make this feel like a television detective-series episode where the outcome is already known.

Jones's intermittent appearances as the larger-than-life and (in this version) ultimately wise MacArthur provide periodic sparks of interest, with the final scene of the beefy American general's photo-op meeting with the diminutive Emperor providing a moment of iconic familiarity. In the end, Emperor the movie seems to have picked its least interesting character as its protagonist. 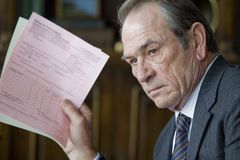 Japan is still playing atrocity-denial game
July 6, 2007
Death in Japan of Hirohito's widow brings era to an end
June 17, 2000
Follow Liam Lacey on Twitter @liamlacey
Report an error Editorial code of conduct
Due to technical reasons, we have temporarily removed commenting from our articles. We hope to have this fixed soon. Thank you for your patience. If you are looking to give feedback on our new site, please send it along to feedback@globeandmail.com. If you want to write a letter to the editor, please forward to letters@globeandmail.com.
Comments