The culinary documentary Step up to the Plate is a pleasurable, if drama-free portrait of French chef Michel Bras as he begins the handover of his three-star Michelin restaurant to his son, over the course of four seasons.

The French title, Entre les Bras, refers to the father and son's surnames (the clumsy English title inadvertently suggests baseball). Like David Gelb's Japanese documentary, Jiro Dreams of Sushi, it's an exploration of family legacy, discipline and a life-long pursuit of harmonizing visual beauty and flavour.

Austerity is build into the very architecture of Restaurant Bras – a modernist building of stark glass and granite sticking out of a mountainside, about three hours drive from Toulouse, in the Aubrac region of south-central France. There, chef Michel Bras focuses on local food and emphasizes the importance of harmony with nature. Appropriately, director Paul LaCoste's film is as much about green fields with grazing cows, sunrises and winding country roads as it is about the art of food, and never about anything as dull inventory audits or book-keeping.

Two cooking sequences book-end the film. Early on, we see the preparation of one of the restaurant's signature vegetarian dishes, the gargouillou de jeunes legumes, a dish of several dozen different vegetables, herbs and flowers, constructed one colourful splash and dollop at a time, like an abstract painting. Late in the film, we see a dessert which Sébastian creates over several months using milk skin, cheese blueberries and rice paste. The ingredients represent personalities for him, he says, and the whole is a kind of family and eventually, he presents it to his father. After reluctantly taking a bite, Michel says doubtfully: "It's tasty. I didn't expect that."

Otherwise, the film covers the usual food-making rituals of selecting the best products at the market, picking mushrooms or instructing the wait staff at their restaurant. We also have family photo albums and brief interviews with family members and friends, and scenes of both father and son and runs through the rolling countryside. Apart from a sequence of the extended family cutting loose and singing and swaying together at a local grape festival, they remain almost priest-like in their vocational seriousness.

While LaCoste's deliberately self-effacing approach gives a sense of the friendly-but-demanding family expectations and the daily rhythms of the food preparation, we're in the dark about a number of things. We never see, for example, a patron eating a meal. Nor do we know the real world status of the restaurant (it was rated seventh of the top 50 restaurants in the world by Restaurant Magazine in 2008, though only 47th last year).

There's a sequence near the middle of the film when Sébastian flies to Japan to visit the Bras' branch restaurant at a resort on the Japanese island of Hokkaido, where he gains some ideas for his dessert in progress. Japan? How big is this outfit? But family and natural intimacy are the themes here, in a film that serves as an elegant commercial for the restaurant's brand.

Jiro Dreams of Sushi: Portrait of a perfectionist
March 16, 2012 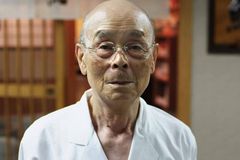