Twelve years and a half-dozen speedometer-busting adventures later, the Fast & Furious franchise is still going strong. To borrow a bit of stunt-car parlance made famous by Quentin Tarantino, we might say that the brand is Death Proof. How else to explain the presence in Justin Lin's film of Michelle Rodriguez, last seen taking a fatal bullet two sequels ago? The sudden resurrection of a fallen heroine– and the fact that she's been saddled with a convenient case of amnesia – confirms that what began as a straight-up, gear-head, action-flick series has morphed into something akin to a soap opera – call it Guiding Tail Lights.

As the film opens, Rodriguez's Letty – the longtime main squeeze of virtuoso thief Dom Toretto (Vin Diesel) – has been spotted by government agents keeping company with some very bad dudes: a team of elite stunt-driving thieves bent on stealing a powerful electronic gadget. Their leader, Shaw (Luke Evans), is a British-accented mastermind who talks a lot about living by a code, which makes him an excellent foil for Dom, who has a similarly rigorous worldview. The difference is that Shaw believes in keeping his associates expendable, while Dom has avuncular attachments to his associates: His former rival Brian O'Conner (Paul Walker) is his brother-in-law, having long since married Dom's sister Mia (Jordana Brewster) and driven off into the Italian sunset.

"It doesn't feel like home," moans Brian of his sun-dappled exile, referring to the fact that at the end of Fast Five he and the rest of Dom's team were forced there by federal DSS agent Luke Hobbs (Dwayne Johnson), a reluctant ally who so appreciated their help in bringing down a vicious drug lord that he let them flee to non-extradition countries with $100-million of the dealer's money. Hobbs shows up early in Fast & Furious 6 with a can't-refuse offer for Dom and Co.: Help him track down Shaw – and by proxy, Letty – and they'll all be welcome back on American soil. Decamping to London to head off the villains, Dom, Brian and the rest – including tech expert Tej (Chris Bridges) and fast-living power couple Han (Sung Kang) and Gisele (Gal Gadot) – find themselves initially overmatched against a crew whose members are basically cracked-mirror versions of themselves – an amusing conceit that Chris Morgan's screenplay leaves underdeveloped.

That the movie is so indifferently written shouldn't really be a surprise. The dialogue is just there to mark time between the set pieces, and it's nice to report that Lin has outdone himself in that department. A freewheeling assault on a military convoy on a Spanish highway unfolds with the gleeful, physics-defying abandon of a 10-year-old smashing his beloved model cars together, while a subway tunnel fistfight between Letty and Hobb's taciturn right-hand woman (MMA star Gina Carano) is one of the best smackdowns in recent memory.

Some actors do a better job of standing out against the chaos; Johnson has genuine star presence and looks right in his element leaping from speeding cars and head-butting henchmen. The post-end-credits introduction of another bullet-headed genre-flick icon as the possible villain for the next instalment (already slated for production) means that Johnson may finally get a worthy foil. So: Same time next year, then? 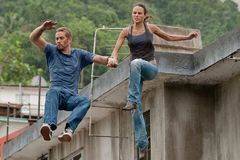 Fast & Furious: They drive fast, they seek revenge and they don't have time for sex
April 3, 2009
The Fast and the Furious: Tokyo Drift
June 16, 2006
Follow us on Twitter @globearts Opens in a new window
Report an error Editorial code of conduct
Due to technical reasons, we have temporarily removed commenting from our articles. We hope to have this fixed soon. Thank you for your patience. If you are looking to give feedback on our new site, please send it along to feedback@globeandmail.com. If you want to write a letter to the editor, please forward to letters@globeandmail.com.
Comments