It is a tricky business adapting a play for the screen. Filmmakers often find themselves having to invent superfluous scenes, chop up dialogue and reconfigure narratives in the hope that their movies won't appear "stagey" – an adjective that acts as a death sentence in the action-obsessed world of cinema. Hell, some films will even fabricate whole characters to ensure that a play becomes a bit more electric. It's a trick James Foley and David Mamet pulled off handily in their film version of Glengarry Glen Ross, but it had an unintended consequence: Audiences still show up for the stage version expecting to see an incarnation of Alec Baldwin's "coffee is for closers" corporate shark, only to leave disappointed.

Denzel Washington has used no such workarounds with Fences, his spare and meticulously faithful adaptation of August Wilson's 1987 Pulitzer Prize-winning play. Working from a screenplay by Wilson (who died in 2005), Washington – in the director's chair for the third time in his career – reverentially crafts a facsimile of the production that earned him and co-star Viola Davis Tony Awards when a revival was staged on Broadway six years ago. As he unfolds the story of a garbage man named Troy (Washington) dealing with the burgeoning civil-rights movement alongside his patient wife, Rose (Davis), in 1950s Pittsburgh, it is clear we are watching a play by any other name.

This fidelity has both advantages and pitfalls. Mostly, it allows Washington to put Wilson's words in the spotlight – wonderfully profane, combustible words that explode with energy and character and emotion and a million other intangible things all at once. In Fences, every time a character opens their mouth is an opportunity to savour the playwright's impeccable ear for language – for capturing the joys and frustrations that come when someone simply tries to say something – anything – about the daily struggle that is life. It's as much workaday poetry as it is dialogue and Washington knows better than to dilute it or make it his own.

Which brings us to the only true, if small, problem with Fences: those rare times when Washington attempts to inject some of his own, unsubtle aesthetic sensibilities into the adaptation. Be it the shot of a rose falling ever so slowly to the ground or skyward points of view that try to imprint a more heavenly perspective on the narrative, Washington cannot help but add a handful of unnecessary, distracting visuals to the proceedings to show that, hey, someone is behind the camera here. He doesn't much change Wilson's words nor the characters' actions nor the narrative thrust of it all, but when he feels he must accent the imagery, the world Wilson created is slightly diminished.

But this is a minor complaint, especially considering who Washington has enlisted to help him produce Wilson's world for the masses. Although Fences can be charitably viewed as a star vehicle for the actor-director – and he does reach for the rafters in certain parts, so loud and proud is his performance – it is Davis who walks away with the production. Against a backdrop of slowly evolving societal progress for both African-Americans and women, Davis's Rose is a strong woman staring down both a brighter future and a tumultuous past, thanks to Troy's wobbly personal history and propensity for screwing around. It is a complicated, layered role that requires a deft touch – a little too much righteous indignation and Rose risks becoming a played-out caricature; too quiet and reserved and she might be completely overshadowed by the bellicose Troy.

Instead, Davis achieves a remarkable balancing act, a delicate and thoughtfully composed mix of anger and love, passion and suffering. Rose is forced to endure Troy's most thoughtless actions, and the way she handles those injuries is a test for any actor. Davis, without a doubt, nails the character's quiet, furious grace with ease. Just give her the Oscar now, Academy. And maybe give her the director's chair the next time around, too.

Review
With La La Land, Damien Chazelle has crafted a perfect film
Review
Passengers: In space, no one can hear you retch
Film Review
Julieta: Promising material results in a tepid soap opera 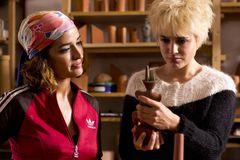