The protagonist of Elle, the "she" of the title, runs a successful video-game company. One of those lacquered and supercilious Parisians, Michèle Leblanc, is a tough boss who urges her young male employees to make their latest product even more violent and orgasmic as some tentacled creature assaults a gowned maiden.

You might hope that when Michèle herself is raped by a masked intruder, in the film's deftly handled opening, she would have second thoughts about her business model. Instead, she enters into a cat-and-mouse game with her attacker. She's the cat, of course.

The first major feature in 10 years from the ever-provocative Paul Verhoeven (Basic Instinct, Showgirls) and based on a novel by Philippe Djian, Elle depicts a woman who refuses to play the victim. Part rape-revenge fantasy, part tightly plotted thriller and part bitter social satire, Elle is certain to divide audiences into those impressed by this novel mix and its puzzling heroine and those who are simply offended. The shibboleth will be that scene where Michèle willingly accompanies a man she now knows to be her attacker down into a sound-proof basement.

In interviews, Isabelle Huppert, who plays the main character, has suggested the film should perhaps be read as a fantasy or fable – or that Michèle's most outrageous moves toward her attacker should be placed in that context.

It's not really a satisfying explanation, for there is nothing in Verhoeven's direction to suggest that we should not read the film as a cohesive and realistic – if exaggerated – whole. Indeed, it is the balance of improbable elements that is most impressive here.

What Verhoeven seems to have learned since the days of the overwrought Basic Instinct is that women can be depicted as sociopathic bitches if you dodge and weave as you go deep and long. In his clever reversals of audience expectations of the thriller genre and in the complexity of the character Huppert builds for him, he creates a game of such dexterous manipulation it is difficult to thematically pin it down. Yet when you do, there doesn't actually seem to be much there.

No, in depicting a woman who is sexually intrigued by her rapist, Elle should not be read as prescriptive: Michèle is not Woman, but rather one highly unusual woman with a unique history. She has good reason not to call the police on her assailant; she had quite enough of the cops in her youth, when her father was convicted in the mass murder of local school children.

The key to all this is Huppert's magnificently detailed performance – in lesser hands, the character would almost certainly prove offensive – as she captures every raised eyebrow, every delicate snub, every bit of glazed aggression that Michèle displays against everyone with whom she interacts. The most banal moment – how she responds "Maybe" to a neighbour's suggestion she come to a public meeting about garbage collection – speaks volumes about her distrust of society.

And no wonder: Raised by a man who turned out to be a killer, she is now surrounded by reprehensible people – a doltish son and his unreasonable girlfriend; a botoxed mother and her brutish gigolo. In Elle, all men are either vicious or henpecked – and most of the women are bitches.

And that, the darkness of the film's satire, is why it is hard to forgive Verhoeven's Elle. He handles the unusual mix of black comedy and taught suspense with a masterful ability to balance elements and shift tones: There is an outrageous scene where Michèle and her ghastly family members, including a new baby, try to rid themselves of her monstrous father's ashes in a public park.

Still, this satirical social setting means the characters do stand for something larger than their own individual fantasies or cruel acts. They represent a world in which Michèle's ultimate revenge is to profit from male brutality, to turn it to her advantage; in Elle, everyone is complicit in violence but, most of all, women are complicit – since the only competent men are busy being violent themselves.

In the end, Michèle's entire persona and all her actions are a reaction to the behaviour of the men around her and her character becomes flatter and less intriguing the more her own sociopathy is exposed.

For all its cleverness, Elle suffers, like many a thriller, from an unmasking that proves less intriguing than the original mystery and, in its misogyny and its misanthropy, the film ultimately proves less interesting than it believes itself to be. Mainly, it leaves a bitter taste in the mouth long after the credits roll. Like Michèle herself, Elle is a nasty piece of work.

Actress Isabelle Huppert on the complexity of revenge in Elle
November 17, 2016 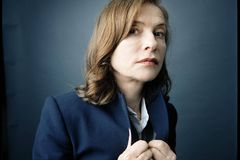 Review
Bleed for This is a rugged, uplifting biopic on boxer Vinny Pazienza
November 18, 2016
Review
The Birdwatcher is an affecting drama but it’s not for everyone
November 18, 2016
Follow Kate Taylor on Twitter @thatkatetaylor
Report an error Editorial code of conduct
Due to technical reasons, we have temporarily removed commenting from our articles. We hope to have this fixed soon. Thank you for your patience. If you are looking to give feedback on our new site, please send it along to feedback@globeandmail.com. If you want to write a letter to the editor, please forward to letters@globeandmail.com.
Comments