When it comes to personal documentary filmmaking, the extreme has become the standard in the past decade, with Andrew Jarecki's child molestation film, Capturing the Friedmans, and Jonathan Caouette's abandoning mother tale, Tarnation, leaving us with inflated expectations of intimate disaster films.

By comparison, Montreal filmmaker Tony Asimakopoulos' Fortunate Son: A Love Story is a gentle affair, involving drug addiction, a lot of yelling and over-attentive mothering. A likeable heartfelt diary film that aims for emotional catharsis and more or less hits the target. At the same time, it touches on a favourite Canadian cultural theme, the high psychological cost of immigration.

If Asimakopoulos can be reduced to a type, he might be called a macho immigrant mama's boy (Mama's Boy was the name of one of Asimakopoulos' earlier short films). The only son of a Greek worry-wart mother and a gentle, passive father, his struggle to assert his individuality led him on a youthful path of self-destruction, including heavy drinking and heroin addiction.

After going into rehab and, on a drug counsellor's advice, staying clear of his mother's infantalizing influence for more than a decade, Asimakopoulos decides it's time to reconcile, and to get his parents to talk about the past. Now in his forties, his life is looking up: he is engaged to an attractive and supportive partner, Natalie Karneef, and wants to start a new chapter in his life.

Along with the use of voice-over and contemporary footage, Asimakopoulos uses scenes from his earlier short films, with actors playing him and his family. (There's a distinct echo of Martin Scorsese's 1974 home documentary, Italianamerican, in some of the clips). Though Fortunate Son does not purport to be strict cinema verité, occasionally Asimakopoulos' approach veers into what looks like contrived reality television staging: An early scene shows the filmmaker's mother calling him on the phone, desperate to hear from him, yet there's obviously a camera operator in her kitchen recording the event. More telling is a scene where he comes over for dinner with his fiancée, and she insists on pushing food on to their plates, the age-old equation between nutrition and love.

The subject of Tony's troubled youth is painfully fresh for his parents, and they seem eager to speak of it: His father, Menio (now deceased) speaks faltering English, describes his shock when he saw a needle fall out of his son's pocket. Ashamed at his failure as a parent, he contemplated driving off a bridge in shame. His mother, Vasso, says in Greek she prayed every day she wouldn't hear that her son had died. Next comes a trip back to the old country, as Tony travels back to his parents' home villages in Greece. There's a nice scene where an elderly woman meets Vasso and Tony on a path and the old lady immediately asks: "Is he married?"

After Natalie arrives, Tony begins to chafe at his mother's attention, and the low-level quarrelling that is a constant part of Tony's parents' relationship. Natalie wonders why they stay together, and obviously sees a side of Tony that's less attractive: Approaching middle-age, he's still struggling with adolescent rebellion. The Greek sojourn, apart from showing the strains of a two-generation family on a trip together, also serves as an opportunity to expose more of Vasso's anxious perspective. She mourns that her mother died alone in Greece while she was in Canada and says she had always intended to return. Instead, after Tony's birth and a subsequent miscarriage, she was unable to have more children. The gulf between her and her husband's English-speaking skills emphasizes her relative isolation: The fear of loneliness is one of her favourite themes.

The film's final act, back in Montreal, focuses on two issues: Menio's cancer diagnosis and treatment, and Tony's rocky period with Natalie, who, understandably, grows a little tired of the camera following them around, in the back of the car, on a picnic, or peering at them in a quiet moment in their apartment. Either Natalie has the patience of a Madonna, or perhaps Asimakopoulos has simply chosen to portray her that way. In any case, ending the film with a wedding provides a conventional happy ending, as well as a personal solution: His mother need not worry about him being lonely – she dotes on her daughter-in-law – and Tony has another woman to make the centre of his life.

Addiction and anxiety but no catharsis
April 30, 2018 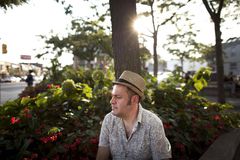