In 1974, Muhammad Ali staged one of the great upsets in boxing history against George Foreman, then a fierce young giant with a blood-freezing glower and devastating strength. After a rocky first round, Ali played possum, lying against the ropes absorbing punches on his raised arms as Foreman hammered at him until the fifth round. Then Ali slipped sideways off the ropes and unleashed a flurry of punches that toppled his adversary. The strategy has been the stuff of boxing study and barroom debate ever since.

The events surrounding that fight, dubbed the Rumble in the Jungle, are chronicled in Leon Gast's electric piece of documentary history, When We Were Kings. The occasion was anything but noble: a multimillion-dollar gladiatorial spectacle between two black American men, transported to the continent of their slave ancestors, the brutal African dictatorship of Zaire, and paid obscene sums ($5-million each) to try to punch each other senseless.

Riding a crest of the black-pride movement, the event also included a giant African-American cross-cultural concert, featuring James Brown, the Spinners, B.B. King and the Pointer Sisters, along with Miriam Makeba and Hugh Masakela. The entire event was the creation of boxing promoter Don King, the shock-haired convicted killer and hyperarticulate huckster who established his reputation with this fight, and subsequently midwifed the sport into its infamy of recent years.

In truth, When We Were Kings is really only about one king, Muhammad Ali, adored by the film camera, the media and the Zairian people. Ali became famous as a fighter who danced, and throughout the film he dances through this vast complex of hype, greed and political repression with an immensely infectious joy and poetry.

The favourite for an Academy Award as the year's best documentary, When We Were Kings came about by lucky accident and long perseverance. Initially, Gast went to Africa to shoot the three-day music festival that was supposed to be the warmup to the fight. The festival, attended by only a few thousand people in an 85,000-seat arena, was a bust. But an injury to Foreman in training delayed the fight for six weeks and Gast and his crew, stuck in Africa with nothing else to do, began following Ali about. The footage remained unreleased for two decades until director Taylor Hackford (An Officer and a Gentleman),became involved and helped Gast to update the material by shooting new interviews, with director Spike Lee (Malcolm X),who provides a black cultural perspective, and literary lions George Plimpton and Norman Mailer, who covered the fight as journalists.

Like everyone else in the movie, they're unrestrained Ali devotees. If the Rumble in the Jungle had been a popularity contest, and not a fist fight, Ali would have been the overwhelming favourite. His title had been stripped from him because he refused to be inducted into the army. As a result, he was an instant Third World hero: a lone black man defying the wishes of the world's most powerful country.

As the film unfolds, Ali seems to grow in confidence and stature in response to the street crowd's adulation, leading cheers of "Ali! Bomaye!" (Ali, kill him!) wherever he goes. He praises Africans' dignity (he was already steeped in Black Muslim thought), plays with children and kisses babies like a veteran politician.

The idea that athletes, especially fighters, become conduits for subliminal social wishes is nothing new. (This is the idea behind Barbara Kopple's excellent and utterly depressing 1993 documentary about Mike Tyson, Fallen Champ: The Untold Story of Mike Tyson.) In When We Were Kings,the film is provided with what amounts to a mythological annotation by Plimpton (allusive, precious and occasionally irritating) and Mailer, an old man bouncing around like a gleeful gnome, vicariously energized by remembering each blow of this old battle.

But if the idea is predictable, When We Were Kings is a rare study in heroism at work. Ali not only rises to the occasion in the ring; he rises above it, turning battle into play and brutality into excitement. Not only does he give the people of Zaire a sense of joy; he even keeps the gloomy media corps amused with his jibes and rhymes: "You think the world was surprised when Nixon resigned? Just wait'll I kick George Foreman's behind." Foreman, massive, brooding and emotionally opaque, isn't the villain of the piece; he's just the scapegoat. He did everything wrong from the time he stepped off the plane with his Alsatian (a dog hated in Zaire since the colonizing French used it as an attack dog). Uncomfortable with Africa and the press, he seems to visibly shrink in size as the fight approaches. After the loss, Foreman crashed into a severe two-year, near-suicidal depression, before finding religious faith and a whole new sense of humour and reconstructing himself, in Mailer's words, into one of the "most fabulous personalities in America." That's too tantalizing: You want to know what that fabulous personality has to say. We can't hear from Muhammad Ali; though not intellectually impaired, he suffers a motor skills problem, resembling Parkinson's disease, that has silenced him. Nowadays, Foreman reminds you a lot of Ali: funny, playful and, like Ali, a man who staged a remarkable comeback against the odds. One would love to know what he discovered about himself after those six long weeks and that devastating night in Africa. 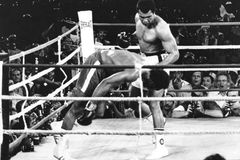 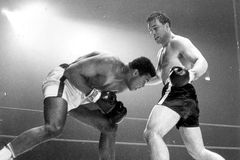 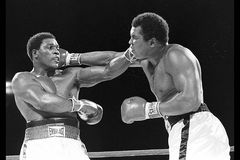