A movie about book editing may not sound promising on the excitement scale. But wait – what if the editor in question was the legendary Maxwell Perkins, who worked with F. Scott Fitzgerald and Ernest Hemingway? And what if the writer being edited was Thomas Wolfe, the wild American literary giant with the personality to match? Genius, right?

Well, it could be. But Genius – about an opposites-attract literary collaboration that develops into an unlikely friendship – is not nearly as smart as it should be.

The film is based on A. Scott Berg's biography Max Perkins: Editor of Genius and is British theatre director Michael Grandage's first feature film.

It opens with a shot set in 1929 – a black and white street scene in the rain; slow-motion shoes on wet pavement. One detail from this scene drove me crazy: Everyone seemed to be carrying the same type of umbrella. Could there have been only one type of umbrella in 1929 Manhattan? (I called around, and the director/curator of the Umbrella Cover Museum on Peaks Island in Maine confirms that while plain, long black umbrellas would have been standard then, there were others available and used.)

A literary editor pays attention to detail. A good director needs to as well. It may be a tiny thing, those umbrellas. But it jolted me right out of the scene.

The film, which transforms from black and white to sepia tones, then confusingly jumps backward in time and we see Perkins (Colin Firth), fedora perched on his head, in his office at Charles Scribner's Sons. As a favour to a colleague, he agrees to read a manuscript by a never-published author. Perkins can't put it down – not on the train to his stately home, not at dinner with his wife, Louise (Laura Linney), and many daughters, not late that night in his pyjamas – and fedora, still. (The hat sight gag is good for a laugh – but a cheap one; it's not a very subtle way of revealing just how stiff this guy was.)

Back at work, Perkins summons Wolfe (a hammy Jude Law) into his office to make him a publishing offer in person. Wolfe is supposed to be a literary genius, but he walks into the office expecting an in-person rejection instead of receiving the usual form letter. Like the umbrellas, this was cringeworthy and inauthentic. This brilliant man didn't think being called into the publisher's office meant something other than a rejection? Please.

He, of course, gets the offer and they're off. Cue scenes of back-and-forth banter between the wild writer and the buttoned-up editor as they work the unruly manuscript into shape. The novel – Look Homeward, Angel – was published in 1929 to critical and commercial success.

Wolfe was a notoriously difficult novelist to edit. "That's a very long paragraph," one of Perkins's daughters remarks on her father's first evening with the manuscript. "It started four pages ago," dad responds. Much later, Perkins asks Wolfe for a transitional sentence; Wolfe submits 50 new pages.

These exchanges hint at Perkins's exacting editorial brilliance, but they don't tell us much about Wolfe, beyond the genius we're supposed to understand that he has – and the fact that he was hard to rein in.

Wolfe shows up at Perkins's office with crates stuffed with piles of pages – the beginnings of his second novel Of Time and the River. Perkins then battles endlessly with Wolfe, trying to cull the never-ending manuscript into a cohesive novel. Of Time and the River was published in 1935 to more acclaim.

Despite the laborious slog and different world views, the two men develop a friendship, a relationship we're supposed to believe has a profound effect on Perkins, who becomes a little less stiff and starts to smile, laugh, even throw back the bourbon and tap his toes at a jazz club.

Meanwhile Wolfe's mistress/muse/patron Aline Bernstein (Nicole Kidman) is feeling as if she's been replaced by Perkins and goes a little mad. She warns Perkins that he'll be abandoned by Wolfe, too. She waves a pistol around and shoves pills down her throat. It's very dramatic, but her hysteria is never properly explained. Why would Wolfe need to choose between the two of them? Or is this just a story she's telling herself? We never really find out.

And this is one of Genius's great flaws: The film, filled with literary heavyweights, is light on insight. So many montages, so many shots of a red pencil marking up typewritten pages, but so little depth when it comes to who these people were and what motivated them.

And in the end, you leave thinking: If only Max Perkins had had a stab at this.

Film Review
No Stranger Than Love is cute and quirky but goes nowhere
May 16, 2018 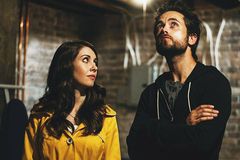 Film Review
The Witness and Tempest Storm: A case study on saving a faltering doc
May 16, 2018 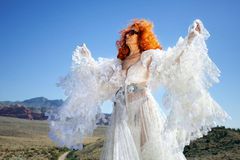 Film Review
De Palma offers a trip through the filmmaker’s wild filmography
May 16, 2018 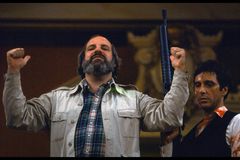