When we first meet Gloria, the middle-aged woman at the centre of Chilean director Sebastian Lelio's deceptively light drama, she's at a singles' night at a Santiago bar, where she likes to dance to old disco hits. Despite her humorously oversized, Tootsie-style glasses and hair-helmet, she exudes a sensual vibrancy. You can see it in the way she raises her arms on the dance floor, or wields her cigarette like an old-fashioned movie star.

After flirting with an old acquaintance and getting a little drunk, Gloria (Paulina Garcia) goes home alone to her apartment, where she can hear her mentally ill stoner neighbour screaming to himself in the upstairs apartment. His creepy, hairless cat has, in an apparently familiar invasion, found its way into Gloria's apartment.

Gloria has been divorced for 12 years and works in an undefined office job where, during the day, she phones her grown children to offer advice or assistance. Her violinist son, Pedro (Diego Fontecilla), is a single parent with a baby. Her daughter Ana (Fabiola Zamora) is a yoga instructor who's having a fling with a world-travelling Swedish skier.

One night at the bar, Gloria meets Rodolfo (Sergio Hernandez), a shy, sad-eyed man of around 60, who shows a keen interest in her. They drink, dance, and end up going to bed, where even his support corset is no impediment to a good time. Later, he takes her on a date to the theme park he owns, where they practise shooting paintball guns.

At first, Rodolfo seems too sensitive and sweet to be true, writing her mushy love poetry and complimenting her incessantly. At one point he confides that his marriage ended a year ago, after he dropped a lot of weight with gastric bypass surgery. He still carries a lot of family baggage, with a demanding former wife and two dependent adult daughters, who call on him incessantly. What's worse, he says it would be less complicated to not tell them about his new relationship.

Things come to a head when Gloria's son Pedro has a birthday dinner. It's also the occasion for a reunion with her now remarried former husband. Gloria decides to bring along Rodolfo. Everyone is civil, though there are tensions between Ana and her father, Gabriel (Alejandro Goic). At one point, Gloria realizes that Rodolfo, who has been hovering peevishly in the background, has left without telling her, claiming he has been called away on yet another family emergency.

The film's second half follows Gloria's contrary impulses to either extract herself from Rodolfo's clinging, petulant ways or give him another chance. The latter call ends up in a disastrous getaway weekend at a casino resort. Much of the film is a portrait of a woman facing a middle-life crisis (the link to John Cassavetes's 1980 film Gloria does not seem coincidental), and Garcia won a best-actress award at the Berlin International Film Festival last year for her wonderfully specific performance. At the same time, Lelio includes unobtrusive symbolic touches – a macabre skeleton puppet, a resplendent white peacock – along with political and generational context.

Chile's younger generation is represented both in Gloria's children, with their uncertain domestic arrangements, and in the agitated student protesters we see on the streets. Gloria's elderly housekeeper, a patient, delicately reproachful, maternal figure, is the generation of her parents. At a dinner party, we see Gloria's peers, the ones raised under General Pinochet's dictatorship. A left-leaning academic complains that money is the new ruling value, and Rodolfo mutters about the lack of leadership. He admits, defensively, that he was once an officer in the navy, which he attempts to distinguish from the "military." Suddenly, his paintball guns don't seem so innocent.

Whether you appreciate Gloria as a portrait of a vital woman, muddling through life's middle chapters, or as an allegory of Chilean resilience, the message is the same: Let's face the music and dance. 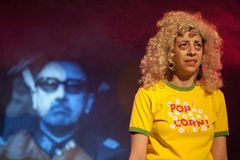 Film Review
No: A funny and uplifting Chilean mix of Lincoln politics and Argo satire
May 11, 2018 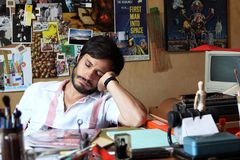 Why Gael Garcia Bernal said yes to the Chilean film No
May 11, 2018 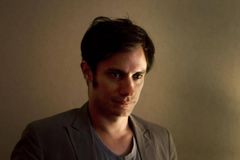 Nostalgia for the Light: From Chile, a painful and beautiful meditation
May 11, 2018
Follow Liam Lacey on Twitter @liamlacey
Report an error Editorial code of conduct
Due to technical reasons, we have temporarily removed commenting from our articles. We hope to have this fixed soon. Thank you for your patience. If you are looking to give feedback on our new site, please send it along to feedback@globeandmail.com. If you want to write a letter to the editor, please forward to letters@globeandmail.com.
Comments