The most interesting character in Alex Gibney's busy new documentary exposé about Scientology is the movement's late founder, L. Ron Hubbard, the prolific science-fiction writer (more than 1,000 books), who invented a religion that became a $3-billion business.

Seen in archival clips, monologuing in a buoyantly confident baritone through a tight, teeth-baring smile, Hubbard radiates a humble grandeur that falls somewhere between Uriah Heep and W.C. Fields. It's obvious how closely Philip Seymour Hoffman studied him for his performance in Paul Thomas Anderson's The Master, capturing the perfect balance of the professorial huckster and true believer.

Going Clear is a bit of a blunt idol-smashing hammer, but Gibney, the filmmaker behind Enron: The Smartest Guys in the Room, Taxi to the Dark Side and The Armstrong Lie, has a gift for showing the workings of complex social systems, and he lays things out clearly and in a well-aced fashion: Scientology's evolution, the cultivation and control of such movie stars as John Travolta and Tom Cruise, and the church's aggressive tactics with perceived enemies, from tax men to prying journalists.

The most damning testimony comes from former Scientology executives such as Mark (Marty) Rathbun, who left the church in 2004, and Mike Rinder, a former media attack dog for the church, who have renounced the system and broken with its current leader, David Miscavige, an aggressive corporate sharpie who makes Hubbard's old-school style look downright cuddly.

Going Clear is based on journalist writer Lawrence Wright's 2013 book on the church. Wright, who helped produce the movie and is one of its main interview subjects, says he wasn't out to write an exposé, but to explore Scientology, which he compares to the "crushing certainty" of belief systems such as the Peoples Temple in Jonestown and radical Islam.

The comparison seems unfair. While Scientology has been accused of blackmail, imprisonment and abuse, the church's members haven't directly killed anyone, unless you count Tom Cruise's reputation.

The more fascinating question is how intelligent, creative people could buy a set of claims that shouldn't fool a reasonably skeptical child. The prime example here is Paul Haggis, the Canadian Oscar-winning director and screenplay writer (Crash, Million Dollar Baby) whose experience and falling away from Scientology after 34 years was the subject of a 2011 New Yorker article (The Apostate) by Wright, which subsequently led to his book, Going Clear: Scientology, Hollywood and the Prison of Belief.

Haggis joined Scientology in his hometown of London, Ont., back in 1975, in what he thought was a practical approach to communication combined with a social club.

Haggis reached a high enough level in the organization to open the envelope containing the most secret and bizarre articles of the faith: Hubbard's handwritten notes about the galactic overlord, Xenu, space planes and frozen bodies dumped into volcanoes and the alien parasites that attached themselves to our souls.

Even after that, it was many years and hundreds of thousands of dollars before Haggis broke with Scientology, over the church's support for California's anti-gay marriage bill, Proposition 8.

The title Going Clear refers to Scientology's system of "auditing," in which subjects talk away their unconscious traumas and anxieties. In Gibney's film, it has a secondary meaning, referring to former adherents who have abandoned the coercive belief system behind and now look back in incredulity at their former gullibility.

Or in the words of another faith, expressed in the King James Bible, "whereas I was blind, now I see." 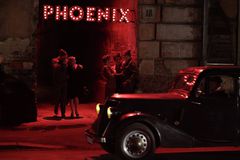 Film Review
Lambert & Stamp: Review of the early days explores who made the Who
May 8, 2015 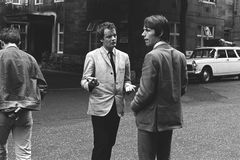 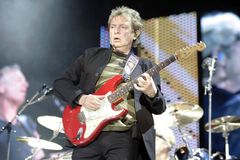