Part biopic, part musical and part dime-store Freud, Greetings from Tim Buckley explores the always fraught relationship between fathers and sons. Yet a very particular relationship, in this instance. The father is Tim, the celebrated singer-songwriter from the sixties who, in the spirit of that reckless age, died from a drug overdose at 28, although not before abandoning the child he sired while still a mere teenager. The son is Jeff Buckley, who never knew his dad yet became a late-blooming musician himself and also perished young, at 30 in a drowning accident. So a particular case, indeed.

Director Dan Algrant's conceit here is to take an actual event – a tribute concert for Tim held at a Brooklyn church in 1991, the concert that sparked Jeff's own career – and wrap a fictionalized drama around it. The son (Penn Badgley) is adrift in California when the invitation arrives to fly east and appear on stage. When he arrives for the rehearsals, the older musicians who played with his father speak as one: "You look like a ghost to me. You look just like him". Clearly, the striking similarity offers Jeff no pleasure. Quite the opposite. The callow ghost appears ill at ease, cloaking his anxiety beneath an outer garment of cool insouciance and a base layer of residual anger.

In these early frames and throughout, the score comes courtesy of classics from the father's canon – Song to the Siren, Pleasant Street, Moulin Rouge. Much less memorably, Algrant intermittently flashes back to Tim himself (Ben Rosenfeld with a nimbus of Dylanesque curls) in 1966, when his son was born and he ran off with his new girlfriend, performing in clubs, recording in studios, launching his legend. These sequences are meant to fill an expository gap, a quickly sketched portrait of the artist as a young man, yet the execution is as flawed as the design. The flashbacks lack either info or tension – they're just tepid and innocuous.

Meanwhile, with the tribute fast approaching, lanky Jeff is content to stare off into the psychological distance, seeming perpetually lost and not a little forlorn. Happily, a fabricated love interest pops up to improve his mood. An intern helping to organize the event, Allie (Imogen Poots) is a lovely sprite, a wannabe playwright, and the chirpy ego to his brooding id. Together, they troll the New York streets, once stopping at a record store where Jeff suddenly belts out an impromptu impression of Iggy Pop. It's the film's first charged scene and Badgley's first chance to dive deeper in character. Like the staring customers in the store, like Allie too, we watch his antic writhing with a mixture of worry and admiration: Is this guy simply coming unglued or is he revealing an inchoate talent just waiting to emerge?

After further meanderings and some rather highfalutin whining ("How does anybody know anybody – we're all a million things?"), the movie reaches the climactic concert, which Algrant has the good sense to recreate from the son's perspective – alone backstage, waiting to go on. When he does, when that latent talent bursts forth, Badgley does a credible take on the signature falsetto that Jeff would later bring to his only album, Grace (and to his blistering cover of Leonard Cohen's Hallelujah). But the best is saved for last.

The curtain call, his solo version of, appropriately, Once I Was, is an electrifying embodiment of the picture's theme – the soul of the father reinterpreted and reimagined in the voice of the son, the inescapable past bleeding into an altered present that itself will alter an unknown future. A sadly brief future. Jeff Buckley would soon share a measure of his father's musical success and an abundance of his tragic fate.

Some films, like some lives, can be redeemed by a moment, and that curtain call is such a moment. It's raw and honest and exciting and liberating, leaving the audience in the church almost too stunned to applaud and freeing the singer at the altar to finally smile an unguarded smile – all his tomorrows must have seemed so certain. 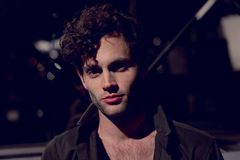