I'd almost given up on Hamlet, but Benedict Cumberbatch has won me back over to the play and, in particular, to the character.

Director Lyndsey Turner's production of William Shakespeare's most quoted tragedy starring the Sherlock star received mixed reviews on stage in London at the Barbican – but it works wonderfully filmed for cinema screens.

Cumberbatch is a feeling Hamlet, not just a thinking Hamlet – and his sensitive performance probably benefits from being seen in a series of high-definition close-ups. He's particularly effective in the final moments of the play. The bodies of Hamlet's mother, his uncle and his frenemy Laertes are splayed around him, and he himself lies dying with the stalwart Horatio at his side. Horatio, played by the excellent Leo Bill as a sweet, tattooed grad student, takes up the poisoned cup of wine that's already wiped out Gertrude and Polonius – and prepares to take a swig, declaring himself "more an antique Roman than a Dane."

But then Hamlet – in Cumberbatch's finest acting moment of the show – hoarsely cries for Horatio not to drink and lunges toward him. With his last breath and final frenzied physical movement, he tries to prevent his friend from killing himself. Having contemplated the question of whether to be or not to be at length; having wondered aloud not only whether life is worth living, but if refusing to take one's own life is in fact an act of cowardice; having dispassionately dispatched with his friends Rosencrantz and Guildenstern, Hamlet's final act is to do what he can to prevent another needless death. To say, empathetically, to Horatio and the world: Be.

I, unexpectedly, wept: I'd never realized how brilliant, and oddly life-affirming, Shakespeare's ending is – and what an incredible character arc is completed in that moment. Perhaps, it's just been a long time since I've seen a truly sympathetic Hamlet. I must admit – I'm usually a little relieved when he finally dies.

Many actors try to make the character likeable, of course, but it often backfires. My favourite productions in recent years have featured Danish princes who have been unapologetically sociopathic – like the great director Julie Taymor, I'd started to see the revenge tragedy as "a serial killer drama."

There's something narcissistic about Hamlet's place in our culture, certainly. Too often a new production feels a ritualistic initiation into an exclusive, mostly male club. The role is often described as the Everest of acting – and like that metaphor, it stinks of an age where we celebrated and applauded the brave male conqueror. The audience is there to sit and admire the lead's wit and fencing skills, and ignore the fact that the only two female characters on stage are pretty lame.

Crucially, Turner's production not only manages to have a compelling Ophelia and Gertrude – but also makes the relationships between Hamlet and these women, as well as between the two women themselves, the emotional centre of the play. The love in this production, twisted and thwarted as it may be, is palpable.

We first get to know Sian Brooke's Ophelia as she lies down on the ground to photograph a wine glass that has been dropped on the rug; she's an artist, a bit fragile from the get-go, but clearly attuned to the details of what's going wrong within Elsinore's walls. During a scene change done in dizzying fast-forward, Ophelia is also revealed to be a co-conspirator with Hamlet, helping him try on different costumes in a game of dress-up as he prepares to affect his antic disposition. When she then tells her father Polonius that Hamlet had burst into her chamber "doublet all unbraced", she seems to be setting him up.

This makes Hamlet and Ophelia's falling out soon after more of a tragedy of miscommunication, caused by their inability to speak freely in eavesdropper-filled Elsinore. When Cumberbatch's Hamlet says "Get thee to a nunnery," he does so more in sadness than in anger – and their relationship is truly tragic rather than abusive as it so often seems.

Anastasia Hille is even more impressive, the fullest and most fascinating Gertrude I've seen. She seems to share power with Claudius in running Denmark – and eventually breaks ranks with him in subtle and not-so-subtle ways. Her delivery of the speech where she reveals Ophelia's death by drowning to Laertes is incredibly acted – she dodges, she comforts, all while navigating through her own shock.

After Cumberbatch however, genius designer Es Devlin (a frequent Turner collaborator) is the star of the show. She's made Elsinore into a haunted house, full of gloomy portraits and hanging weapons. The ghost of the murdered king appears within its walls, then literally gets swept under the rug.

Later, a theme of child's play comes to the surface in the design as Hamlet plays in a miniature castle with giant toy soldiers – contrasted with the real war games going on outside the castle's walls. And, in the last acts, Devlin's set fills with rubble allowing for many gorgeous images – such as Ophelia climbing a pile of dirt to go drown herself, and Gertrude running desperately after her. (The lighting, by Jane Cox, is suitably haunting.)

You may find the design overloaded with ideas, not all of which mesh – but it keeps the production visually appealing even when it hits bumps. Some of the older actors really pull out the musical Shakespearean verse speaking, while a couple of of the younger ones seemingly go for a mumble-core approach. And I've never encountered a less interesting Polonius than Jim Norton.

But, on the whole, Cumberbatch's heartfelt performance in Turner's humane, cleverly cut and rejigged production makes you feel like this play is, indeed, timeless and packed with human wisdom, poetically revealed. How great that it will be the way so many young fans of the leading man around the world first encounter Hamlet, and perhaps even Shakespeare.

Sherlock Holmes: If this play were trimmed, it could be very entertaining
November 5, 2015 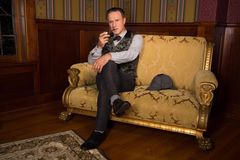 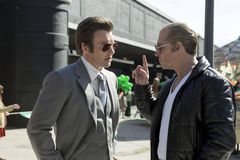