There's a dry Canadian laugh to be had at the climax of Hyena Road, Paul Gross's new movie about the war in Afghanistan. The Canadian forces have been building the road of the title deep into Taliban territory, creating a dirt track that can only be driven in armed convoys protected by snipers. It may not be Yonge Street, but the road is strategically crucial to defeating the Taliban, so the Canadian mission at Kandahar is going to have a nice little opening ceremony complete with a general and a plaque to unveil. The scenes that will follow are grisly, and launched by a fatal misunderstanding of local culture, but first the camera pauses for a moment on the insignificant sign announcing the road project and marked with a small maple-leaf flag. No fluttering stars and stripes or military band here: A nation that always keeps its sense of irony close at hand knows there's only a small distance between the grand achievement and the futile gesture.

Since Sept. 11, 2001, Hollywood war movies have treated the public to deep black, shining white and spiralling shades of grey; Hyena Road may prove too unemphatic for many a moviegoer as it repeats a well-worn theme – war is bad; soldiers are good – but its lack of histrionics is admirable and the realism with which it observes military life is remarkable. Hyena Road was shot in Jordan and Manitoba, on a budget reported at $12.5-million, which is very large for a Canadian film but tiny by the standards of any Hollywood war movie. Whatever the cost, its war scenes are plenty thrilling, but the film's real achievement is its quiet authenticity.

Gross plays Pete Mitchell, a wise and wisecracking intelligence officer who narrates the action, explaining the impossibility of knowing who is friend and who is enemy among the tribal rivalries of Afghanistan. Yet things seem simple out on the Hyena Road, where sniper Ryan Sanders (Rossif Sutherland) and his crew of sharp-shooters just pick off any local they see planting explosives. Back at the Kandahar base, all their action is overseen and authorized through continual radio contact with an operations room lead by Jennifer Bowman (Christine Horne), the commanding officer with whom Ryan is having a forbidden affair.

When Ryan and his crew are surrounded by Taliban and rescued by a mysterious Afghan elder, Pete suspects that the Ghost, a mythical mujahideen warrior who the Russians were never able to kill, has returned to southern Afghanistan.

The plot revolves around Pete's attempts to tease out the Ghost – performed with a haunting presence by Neamat Arghandabi, a non-actor now working as an adviser to the Afghan government – and play him off against another slippery ally, a tribal chief and local boss who's in the pay of the CIA.

Pete is both helped and hindered by Ryan, a happy sort who believes he can make the world a better place if he just puts a bullet in the right person. So, the man who knows it's complicated is depending on the man who thinks it's simple, but that predictable war story takes place against a backdrop of finely detailed fighting scenes, which reveal both the terror of the battle and the odd intimacy of a process that allows Jennifer to be assessing Ryan's situation and issuing orders from inside the razor-wire fence 15 kilometres away.

As both director and star, Gross leads a strong ensemble full of low-key naturalism. The movie is continually animated by their small touches. Horne brings an interesting awkwardness and unwilling repression to Jennifer, a by-the-book officer sexually excited by an affair that is against regulations; Sutherland, in contrast, just shines with casual good cheer. The camaraderie of his crew – Allan Hawco's friendly Travis and David Richmond-Peck's terrified Hickie stand out – is also nicely detailed while Gross continually lightens Pete's cynicism with humour. You can see the actor revelling in the jokes he himself has written: "I'd just love to see this place host the Olympics," Pete says.

The war story featuring good people making the best of a bad situation may feel very familiar, but it is a better kind of familiarity that also characterizes Hyena Road. These are not the kind of folks you are used to seeing onscreen, but rather the kind you meet in life: They are a cheerful crew of well-meaning Canadians, usually hard-working and competent, often unsuccessful, but never dispirited. If Gross's First World War movie Passchendaele was a sloppy and melodramatic attempt to depict Canada at war, Hyena Road now hits the mark. 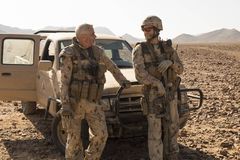 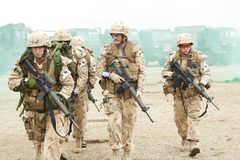 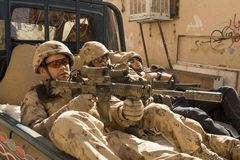 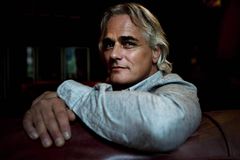