Midway through the 2014 drama Birdman – I refuse to use its subtitle or (The Unexpected Virtue of Ignorance) – Michael Keaton's extremely Michael Keaton-esque character delivers a desperate admission to his daughter on the eve of his comeback. "This is important to me, all right? Maybe not to you, or your cynical friends whose only ambition is to go viral. But to me. To me, this is … God. This is my career, this is my chance to do some work that actually means something!"

If that speech hits a distinct chord when discussing Michael Keaton (the man, but also the Birdman fascimile), it is because the industry has been trying to sell moviegoers on the rebirth of Michael Keaton – the actor Who Actually Means Something, Dammit! – seemingly since he hung up Batman's cowl. There was the on-the-nose Birdman, but also 2015's journalism drama Spotlight. And long before that, there was the Quentin Tarantino-assisted resuscitation with 1997's Jackie Brown.

None of the projects netted Keaton the Academy Award many believe he so richly deserves – whether simply for his innate talents, or simply as compensation for enduring the sins of Hollywood's original superhero franchise.

Now, with this weekend's wide release of the McDonald's-skewering biopic The Founder, Hollywood is giving the Michael Keaton reboot one more go – and, for myriad reasons, it's an effort that will fail. Again. Which is a shame, because as limp and cold as The Founder is as a movie, it contains one of the finest Keaton performances of his entire career, maybe the one he's been working his whole life toward.

Focused on the story of former McD's CEO Ray Kroc, the travelling salesman who turned a humble burger shack into a global behemoth, The Founder aims to be the fast-food equivalent of The Social Network – a gritty chronicle of the greed and venom needed to turn an idea into a legacy.

But whereas The Social Network had a wildly brilliant director in David Fincher, a barbed screenwriter in Aaron Sorkin, and a pulsing score in composers Trent Reznor and Atticus Ross, The Founder has … pretty much no one.

Director John Lee Hancock seems like a perfectly amiable gentleman, but his work here is as pedestrian and uninspiring as his filmography suggests (does anyone get wistful when discussing Saving Mr. Banks, or The Blind Side, or The Alamo? More pointedly, does anyone remember those films?).

Writer Robert D. Siegel's screenplay was once listed on the famed industry "Black List" for best unproduced scripts, but it's either so by-the-numbers or been so sanded down that it calls into question the entire credibility of such a list. And The Founder's music is just inconsequential enough that I simply cannot be bothered to look up who is responsible. (Okay, I balked at the last minute – it's Carter Burwell, whose CV reveals that he should know and do better.)

But what The Founder does have is Michael Keaton, and thank the Hamburgler for that. As Kroc, a mostly despicable man who saw an opportunity to make a fortune and did everything in his power to ensure said fortune was his alone, Keaton delivers a turn that defies expectations, and asks you to reconsider his complete filmography.

In lesser hands, Kroc would be a simple cheeky villain, the kind of love-to-hate scoundrel you could safely jeer at during 90 minutes in the dark, but who would exit your mind within minutes of the closing credits. Keaton, though, offers no such simple execution, instead fleshing Kroc out in all directions.

He's a schemer, yes, but also one who chafes at those with lesser ambitions. He's a jerk, but one you'd sit down with for dinner, and happily foot the bill. He's a smart-ass who doesn't know when to quit, but you'd surely sign his dotted line. Kroc constantly throttles back and forth between drive and despicability, and it's all thanks to Keaton's subtle, sly, and supremely entertaining performance that you're never quite sure why you're rooting for his success.

"I know what you're thinking," Kroc says toward the end of the film, in one of its two direct-to-the-camera speeches (which is two too many). "How the heck does a 52-year-old, over-the-hill milkshake salesman build a fast-food empire with an annual revenue of $700-million? One word: persistence." That same, simple answer can be applied to Keaton himself – Kroc is not an easy man to identify with, but the actor's ferociously determined desire to deconstruct the antihero turns The Founder into a cultural artifact that cannot be ignored.

It's a captivating enough act of pure characterization that I couldn't help but embark on a brief reassessment of Keaton's other work, and damned if the comeback narrative Hollywood has been pushing isn't deserved.

Even in would-be blockbusters, such as Need for Speed and RoboCop (the new, bad version), Keaton stands out, his wild energy pushing along projects that otherwise flat line. If the Academy of Motion Picture Arts and Sciences wasn't so historically averse to comedy, I'd wager that the actor's turn in Adam McKay's The Other Guys might have netted Keaton a For Your Consideration campaign, so delightfully unhinged is his supporting role.

Yet, I fear all of Keaton's supreme efforts in The Founder are, once again, for naught. Getting past Hancock's blasé eye and Siegel's by-the-books structure is a hurdle. Awards bodies have been mostly ignorant of the film, with the biopic gaining zero traction outside the AARP Movies for Grownups Awards (yes, really).

And even the drama's U.S. distributor, Weinstein Co., seems indifferent to its success, having shifted the movie around the release calendar for the past year, and only offering it the faintest of Oscar hopes with a tiny awards-eligible release late last year.

All the more reason, then, to throw in with whatever the next inevitable Michael Keaton comeback might be. With hope, it will go down just a bit better than The Founder's otherwise shoddily composed, not-so-happy meal. 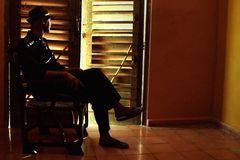 Review
Maliglutit: All-Inuit drama a compelling tale about family love
January 20, 2017
Follow Barry Hertz on Twitter @hertzbarry
Report an error Editorial code of conduct
Due to technical reasons, we have temporarily removed commenting from our articles. We hope to have this fixed soon. Thank you for your patience. If you are looking to give feedback on our new site, please send it along to feedback@globeandmail.com. If you want to write a letter to the editor, please forward to letters@globeandmail.com.
Comments