Writer Tom Ricks is an American in Paris – but a very different American in a whole other Paris. The Woman in the Fifth is like that. It sets up apparently familiar scenarios only to defy our expectations. Repeatedly, what seems one thing – an expat's adventure abroad, a complicated romance, a mystery thriller – turns to be something else entirely. For a while, these slippery transitions keep us off balance and drawn in, but the final change sees the film adopting a far less appealing persona, the allegorical kind where a small idea gets overdressed and acts like a big shot.

As he did in the exemplary My Summer of Love, director Pawel Pawlikowski uses a novel as a jumping-off point, then bends the contents considerably to fit his needs. Here, Tom (Ethan Hawke), rumpled and bespectacled and palpably anxious, arrives as a dark presence in the City of Light. Hoping to reunite with his French wife and six-year-old daughter, he approaches the door of their spacious apartment, only to have it slammed in his face. Clearly, his domestic past is checkered. So is his present.

Falling asleep on a bus, Tom awakens to find himself robbed and stranded in a part of Paris not featured in the tourist brochures. There, amid the grey concrete of the industrial outskirts, he seeks refuge in a seedy hotel, whose shady owner offers him a room and a stipend in exchange for a nightly job of work: watching a surveillance camera that monitors the comings and goings of suspicious folks into a suspicious locale to engage in God-knows-what suspicious activities.

At this point, we appear to be in the domain of a crime thriller, reminiscent of, say, a lesser Roman Polanski effort like Frantic. But that's precisely when the movie goes into chameleon mode, and starts to change its colours. Checking out a bookstore for a copy of his one published novel, Tom is invited to a literary salon. Enter the red-dressed woman in the fifth arrondissement – on the Left Bank with its Latin Quarter and its writerly rep. Her name is Margit (Kristin Scott Thomas), but, given her seductive charms and her sophisticated mien and her disappearing acts, it's not hard to guess her other monicker. Yes, she's that most quixotic of femmes fatales – Margit is a Muse.

Suddenly, real morphs into surreal, crime drama into psychodrama, and Pawlikowski tries to upgrade from lesser Polanski to the major stuff, to such hallucinatory mind-benders as Repulsion and The Tenant. But in those films the internal tensions were existentially large. In this case, it's just the Muse offering the Artist the standard two-way contract: Hey, I'll give you a free pass into the other world of the imagination if you agree to abandon all of this world's responsibilities. Consequently, everything that happened before loses its concrete status and becomes merely symbolic. The shady hotel owner, Tom's angry wife, his abandoned daughter – now all are simply metaphors of the dialectic that pits the selfish demands of art against the broader imperatives of life.

Problem is, that dialectic seemed trite even back when Ibsen was using it to construct The Master Builder. More problematic still, an abstract film in the service of a small idea gives rise to small and abstracted performances – to actors unable to ground their work in any dramatic reality. Ultimately, that leaves us with too little to ponder and nothing to feel. The Woman in the Fifth is an interesting chameleon until it runs out of disguises, and all that was transitory just looks transparent. 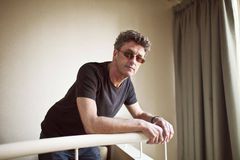