In the 2012 hostage caper Argo, Iranian officials are fed a CIA-hatched scheme about the making of an outlandish sci-fi epic. They buy it – hook, line and Ben Affleck's beard.

But about Jupiter Ascending, a beautiful muddle from The Matrix-making Wachowski siblings. It's about unlikely rises, a flying dog-man, quasi-eternal humans, royal galactic rivalry, lizard henchmen, laser battles, spaceships and an attractive Russian cleaning lady. If the unlikely script were pitched to the Persians during the hostage crisis, the Ayatollah's goons would have been hip to the ruse, catching on well before the "and it's in 3-D" clincher.

Then again, Warner Bros. bought it, and maybe you will, too, (especially if you're young and even if you're skeptical as to Mila Kunis's ability to carry a space-opera of this $175-million size). I can tell you that the space-film scenesters – shout out to the Royal Astronomical Society of Canada – were in attendance at an early screening of the film. Big applause at the end – over the moon, one might say.

The prologue involves a young Russian, peering at the stars and possibilities with his telescope. "The sky is completely full of miracles," he tells his very pregnant wife. They've decided the child will be called "Jupiter," named after the "biggest and most beautiful" planet. Sadly, a home invasion leaves the husband dead. The mother emigrates, with the baby girl coming into being in the middle of the Atlantic Ocean, "born without a country, a home or a father." Fast forward to Chicago, where years later Jupiter cleans the houses of the elite. Each working day she wakes up at 4:45 a.m.; she hates her life.

As you might guess from the title, however, you can't keep a good Jupiter Jones down. Portrayed by the watchable but uncomplicated Kunis, Jupiter is a toilet-washing Cinderella blessed with a majestic arrangement of genes. Specifically, she happens to be a genetic "reoccurrence" of the deceased queen of a technologically advanced race and mother of the universe's three overlord siblings.

They're quite a brood, all up to varying degrees of no good. Their inheritances involved planets, such as Earth, which are used for the harvest of its beings. The galactic royals trade in a sort of youth serum; they live for millennia. They are untrusting and untrustable, and their level of conspiracy, gorgeousness and evolution makes the British Royal Family look like a pack of corgis in comparison.

The film's antagonist is the eldest royal sibling, played to near-camp effect by Eddie Redmayne. He talks in a measured, menacing whisper, sucking on each word as if he doesn't want to let it go. Maybe he's not acting. The young adult-y script has a milky way to it, with a convoluted plot clear to only those who can channel Stephen Hawking with as much ease as the Oscar-nominated Redmayne.

Basically, the earthling girl Jupiter is the key. Because she's a genetic repeat of the late queen, she earns the title of Her Majesty and is willed planet Earth, which will be "harvested" soon enough.

Everybody is after her, but the one who catches her the most is Channing Tatum's Caine Wise character. He is a former space legionnaire who has a splicing of dog genes that served him well until he bit someone. Bad dog-man! He seeks redemption by protecting the sought-after Jupiter, and dearly hopes to earn back the prosthetic wings that were stripped from him.

Tatum, even with Doberman ears and jutting pooch jaw, is hunky, dog-loyal and brooding enough to be attractive to the unlucky-in-love Jupiter. You can take the Kunis out of the rom-com, but…

The able Caine's main talent is anti-gravitation: He wears boots that allow him to skate on thin air. Going down is easy, according to Caine, going up is trickier. And really, Jupiter Ascending is all about the drag of gravity and grasping of stars that seem in reach. It's the Wachowski interstellar screed against greed – time is the ultimate resource; the anti-aging serum is the currency of the elite – and societal pyramids.

In the end, Jupiter is uncomfortable with her ascension. She longs to return home to her simple, squabbling family in Chicago. Not everyone has the royal jelly, and we needn't look further than Kunis to know. She's a likable actress, but one seemingly unfit for majestic roles like this. Jupiter stays put, mostly because of her. 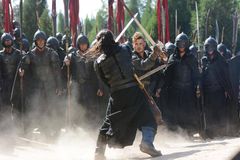 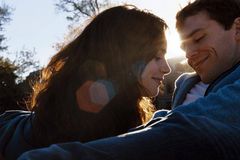 Film Review
The SpongeBob Movie: A last gasp for a flagging franchise
February 6, 2015 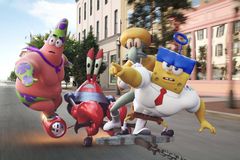