If Steven Spielberg's first Jurassic Park faced the daunting prospect of resurrecting dinosaurs, the new Jurassic World, produced by Spielberg but directed by Colin Trevorrow, has more modest but still challenging ambitions: Resurrecting the feeling of seeing Jurassic Park for the first time.

In effect, Jurassic World is the sequel as fan fiction, with a nostalgic technical glow that hovers over the proceedings – romantically lit and shot characters, jungle scenes captured in the rich colour dynamics of film, not digital video, and a score that frequently refers to John Williams's rousing Jurassic Park theme from 1993. At the same time, the script is almost apologetically humorous about its derivative formula and blockbuster aims. The most ambitious thing about Jurassic World is that it asks moviegoers to sympathize with people struggling to keep a dinosaur entertainment franchise alive.

Twenty years after the traumatic events of Jurassic Park (the two intervening movie sequels are wisely ignored), audiences have become jaded. Profits are dipping at Jurassic World, a dinosaur zoo and research facility on the island of Isla Nublar off the Costa Rican coast. Tourists take cruise ships to the island and stay at luxury hotels, ride in bubble-shaped cars through fields where peaceful herbivores graze, or watch some sort of giant turtle-saurus leap out of the water and snap up sharks. It's all a little tame. Teenagers text and watch Jimmy Fallon videos on their phones while the guides, like dolphin trainers, show what tricks the big captive creatures can do.

"No one's impressed by a dinosaur any more," bemoans Claire (Bryce Dallas Howard), the ultra-coiffed, high-heeled corporate head of Jurassic World. She works for the super-wealthy adventurer and owner Simon Masrani (Irrfan Khan), who inherited the Jurassic franchise from John Hammond (Richard Attenborough).

Determined to give the theme park a commercial makeover, the executives have commissioned genetic scientist Henry Wu (B.D. Wong, returning from the first film) to create something "bigger, scarier, cooler" to bring back the wow factor to the theme park. Theme-park management, of course, is a subject close to Universal Studios's own interests, and the script consistently critiques corporate excess while celebrating the same. An obvious example is the way Jurassic World is stuffed with product placement, while the ethics of branding is also a subject of debate among the brass in the movie.

Jurassic World's new attraction (or disaster-waiting-to-be-unleashed) is called Indominus rex, which is part T-rex, but with a bunch of other creatures in its DNA mix (cuttlefish?), allowing the dinosaur's various powers to be revealed through the course of the movie.

Along with the familiar sadistic kicks of watching creatures that lurch and chomp, the most obvious Spielbergian element here is the emphasis on family bonding. As what used to be called a "career gal," Claire has no significant other or children but has some sense of family obligation. She agrees to babysit her two nephews: glum, bored teen Zach (Nick Robinson) and his geekily adorable dinosaur-obsessed younger brother Gray (Ty Simpkins), while their parents work out their divorce.

Fortunately, terrifying dinosaurs have a way of bringing human beings closer. Claire previously dated the old-fashioned, macho dino trainer Owen (Chris Pratt), who works at the facility in a special program with raptors, those speedy and relentless carnivores that starred in the first film. Owen is at odds with another former military man, Hoskins (Vincent D'Onofrio), who wants to turn dinosaurs into military assets. When Claire becomes concerned about the safety of Indominus rex's pen, she has to call on Owen for advice. The timing is perfect: He shows up on the same afternoon Indominus decides to make her move.

The second half of the movie is mostly devoted to the logistics of moving Indominus around the island, endangering the kids, and the various stratagems of good and bad humans and dinosaurs. Trevorrow (Safety Not Guaranteed) repeats favourite Spielberg tropes (different foreground and background scales, giant things that aren't noticed until they move slightly), without quite matching the latter's intensity.

The dinosaurs (animatronic, CGI and puppets) are big (there are only a handful of shots where Indominus can be seen at her full height) and, as far as we can guess, impressively lifelike. The humans are somewhat less so. Several, like D'Onofrio's jingoistic military man and Wong's amoral scientist, are crude B-movie stock characters.

As Owen, Pratt – in pugnacious Indiana Jones mode – tones down the comedy from his star turn in last year's Guardians of the Galaxy, but has the right mixture of gravity and mischief. Less fortunate is Howard, who, stuck in retro girl fashion, is mostly obliged to shed clothes and get sweatier and more dishevelled as the film progresses.

Jurassic World never breaks out of its own confines of homage and imitation. The movie ends up as an awkward, ungainly hybrid: large, but inconsequential. 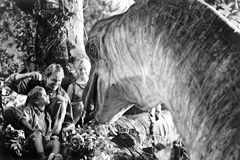