There's a moment early in Kevin Hart's new stand-up special, during the requisite pans across the rowdy, racially diverse crowd, where a podgy guy in a golf shirt beams and shouts, "KEVIN HART!" while pointing at himself.

It's as if he is, somehow, mega-millionaire comic actor Kevin Hart. It's a sentiment echoed when Hart makes an appeal to the sellout crowd of 50,000-plus people at Philadelphia's Lincoln Financial Field, noting the ethnic diversity and saying something like, "If we can laugh together, we can live together, and that's what I'm all about." Kevin Hart is America, and America is Kevin Hart.

I won't presume to understand what passes for popular taste. But seeing an audience in the tens of thousands lose their mind for Hart's jokes about hating his family and the hypothetical perils of dating a woman with only one shoulder, I can't help but feel skeptical.

Comedy, like plenty of art, depends on a unique perspective. It's the way the comedian casts his gaze upon the world that makes them funny and worthwhile. So, it follows, if so many people can buy into a comedian of Hart's stature, said comedian's POV can't be all that stand-out or singular.

Then again: comedy is famously a matter of taste. And there must be something all these Americans, of different ethnic and racial and socioeconomic backgrounds, find in Hart that have merited his success, and that I'm missing. And so, I pull my finger to my chin, in my best furrowed, Principal Skinner-ish pose and wonder, "Am I so out of touch?"

No. It's America who is wrong. Hart's is surely an all-American success story. Born in Philadelphia to a single mother, his drug-addict father in and out of jail throughout his youth, his is the tale of started-from-the-bottom, pulled-up-by-your-own-bootstraps American meritocracy. After struggling as a young stand-up, he went on to become one of Hollywood's top-grossing comedians, parlaying his high-strung pipsqueak persona in the Think Like A Man and Ride Along films.

Hart's an unlikely leading man, something he uses to his advantage with effective, self-deprecating humour. His new concert film opens with a set-piece that sees Hart, playing a less-than-suave, not-so-secret agent, being mocked by Don Cheadle, fumbling his way through a high-stakes poker game, and being showered in a bad guy's blood.

But it's easy to be humble and deprecatory when you're worth tens of millions of dollars; when making fun of yourself is precisely what people expect of you.

Sure enough, as soon as he arrives on stage, decked out in gold chains and the Adidas high-tops to match, his cocksure confidence is as conspicuous as his wealth. For nearly two hours, he works through jokes about his kids, his fiancée, how funny his friends are, and how silly it sounds to order at Starbucks (yes, in 2016; it's a bit that might as well be followed by jokes about airplane peanuts and "lady drivers").

The new film is called What Now?, and in Hart's hands it feels more like boast than an existential pang. He's conquered Hollywood, made millions as a so-so stand-up and, as he puts it, "made history" by selling out a football stadium for a comedy show. There is nowhere to go but further up.

There's a comfort to be found in Hart's skyrocketing mobility that makes America clap and cheer and howl along. It hardly matters that his jokes aren't that funny, or that he runs hack-y catchphrases into the ground for cheap laughs. Kevin Hart is, every slight inch of him, an American-made success: proof that machinery of the meritocracy functions just fine, regardless of whether or not it actually privileges those with merit. 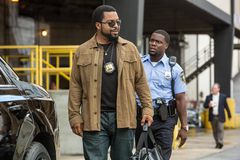 Film Review
Central Intelligence – like The Rock himself – is silly and lighthearted
June 17, 2016 Film Review
The Secret Life of Pets: An animated comedy sure to please kids, parents
July 8, 2016 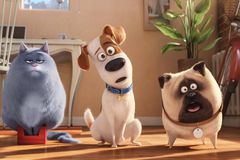