Back in his feature debut, Brick, writer-director Rian Johnson was content to bring deep shades of film noir to the hallways of high school. Well, Looper ups the ante like a poker player on speed. What a potpourri of genres we have here – noir again, but sci-fi too, and action and horror and psycho-drama with existential trimmings, the latter designed to invite the thinking viewer into the fray. Johnson flips the switch on the mixer and out pours an odd yet rich blend – too rich sometimes, and not as nourishing as billed, but wonderfully easy to swallow.

First frame: Suddenly, from nowhere, a hooded figure appears, shackled and on his knees in a vast cornfield. Behind him stands a paid assassin. The trigger is pulled, the deadly deed is done. In the Kansas of 2044, there are several such assassins, low-rent killers known as "loopers." Joe (Joseph Gordon-Levitt) is among them, his job to bump off targets worm-holed back from the future 30 years hence. There, time-travel has been invented but, given its reality-warping dangers, made illegal. Only the Mob uses it: What better way to dispose of bodies than to gun them down in the past?

These early scenes set a brisk pace, sink a deep hook, and keep the eye intrigued. Turns out that 2044 is just a grimy extension of the present, with the poor vastly multiplied and further distanced from the rich. Nattily attired, the retro-hipster of his era, Joe runs with the affluent crowd, using his silver bounty to own a sleek convertible, placate his stripper girlfriend and support his considerable drug habit. His boss is Abe (Jeff Daniels in a Lincoln-esque beard), whisked back three decades to run the hit-squad and to flash his sharp wit. When our looper announces his plan for a sojourn in Paris, honest Abe is quick to counter: "I'm from the future – you should go to China."

Yes, the dialogue is as clever as the conceit. So is the twist: For every assassin, there comes the moment when the transported figure in the hood is his future self, and the killer must "close the loop" by killing himself – homicide bleeding into suicide. But when Young Joe points his blunderbuss at Old Joe (Bruce Willis), the wily veteran escapes and the chases are on. Abe is now in hot pursuit of callow Joe, who is hard after grizzled Joe, who is himself on the hunt for a demonic child fated to become the future's evil overlord. Confusing?

Surprisingly not. What follows layers in all manner of plot-heavy complexities – Emily Blunt surfaces to double as a love interest and the child's anxious mother – but, for the most part, the convolutions are logically laid out. And when the film does stall under their weight, Johnson is quick to re-ignite the momentum and re-engage our interest, not least by elevating the action with his visual flair. En route, the principals and supporters are uniformly strong. Daniels ratchets up the menace without losing the humour; Gordon-Levitt sports a latex proboscis and a louche gait to suggest his genetic debt to Willis; and Bruce himself is at the top of his squinty-eyed game.

Admittedly, the thinking viewer will be disappointed. The classic tensions are certainly there to ponder – father versus son, experience versus innocence, nature versus nurture, the cycle of violence versus the dawn of peace. However, this is where the mix of genres gets too rich and tends to dilute the themes, with the result that the deep thoughts seem shallow – imagine, if you dare, The Playboy of the Western World in a wading pool with The Demon Seed. So, in the end, the fun in Looper definitely trumps the philosophy – then again, in the end, maybe fun is the greater good. 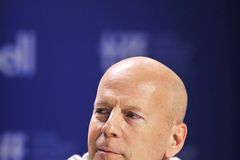